Wildcats back on the road again 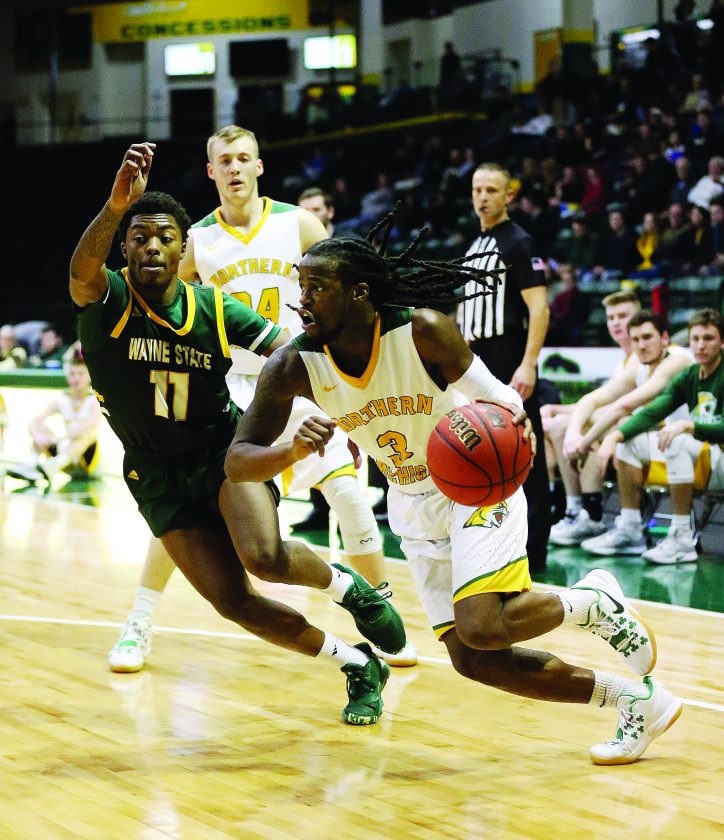 MARQUETTE — A lengthy break can be a blessing or a curse.

Sometimes it can hurt a program, especially if goes into the break on a winning streak, as the team could lose whatever momentum it has.

However, for the Northern Michigan University men’s basketball team, the break appears to have had the opposite effect. Before Christmas, NMU lost back-to-back home games, one of them to NCAA Division III Ripon College, after beating rival Michigan Tech at the buzzer.

Last weekend, it looked like the Wildcats (6-7, 3-2 GLIAC) had turned things around as they defeated Ashland last Thursday and outlasted Wayne State Saturday in a game where the ‘Cats hit 11 3-pointers.

“I think anytime you get two wins, you’ve got to try to enjoy it within reason,” Northern head coach Matt Majkrzak said. “I think one thing that we talked about is our season has kind of been defined by peaks and valleys.

“We had the (GLIAC) opening weekend where we get swept and we feel pretty down. Then we go beat Tech and now, we’re high again. Then right before Christmas, we lose two games, including against a Division III opponent and you’re back down to feeling bad about yourself. Then we come back and we get a sweep at home.

“So it’s kind of been that up and down the last month and the question is going to be now that we’ve had a high, is how are we going to respond to that. Can we go play two more good games, or is it going to be another low?

“I think that’s kind of the challenge this week is being able to feel good about yourself, but keep that edge and keep that kind of chip that we had going into this weekend.”

Majkrzak also said that the two wins last weekend gave his team confidence to know that it can get the job done in crunch time.

“It reminded me a little bit of the Tech game, where it felt like we were in control for most of the game and then all of a sudden, you look up and you’re not in control anymore,” he said. “Similar to Tech, I think we had the ability to kind of fold because we didn’t play that well at the end and we lost a bit of a lead.

“I think that’s huge for not necessarily a young team but for a team that’s trying to compete night in and night out and trying to climb up to the middle or above that in the standings. I think having some confidence to know you can win close games is definitely needed. So that was a good sign.”

Now the Wildcats head on the road again to Purdue Northwest Thursday and Wisconsin-Parkside Saturday and it’s a crucial weekend.

“It’s been a while since we’ve traveled,” Majkrzak said. “We started out the year going all over the place, Alaska, Minnesota, Illinois. We’ve been in the U.P. now since then, so it will be a little bit different getting back on the road.

“I think one cool part about this weekend is, if you look at our roster, these are probably the two closest games where most of the players are from. We have a lot of Illinois kids and a lot of Wisconsin kids, so to get to play kind of around home is always kind of a fun deal for those guys.

“Both teams are well coached. Purdue is much improved. Parkside is the defending champion in the North last year, so we definitely are going to have our hands full with two good teams.

“I’m just excited. We had our best practice of the year on Monday, which I thought was interesting just coming out of that weekend. You didn’t know how we’d react and I was happy that we had a great practice. But it’s going to be kind of finding that edge and not allowing just one good weekend to kind of change the way we play defense, change the way we rebound, because if we’re going to have any chance in games, I think we now know that’s where it’s going to come from. So hopefully, the road and playing in front of a lot of friends and family, hopefully, that gives us a little edge and maybe can lead to a little chip in some different ways for us.”

Like the men, the NMU women will also be heading into the weekend with a little confidence. After getting handed two straight 40-point losses by Tech and No. 4 Ashland, the Wildcats (6-7, 3-2) beat WSU Saturday after Liz Lutz hit a trey with 10 seconds left.