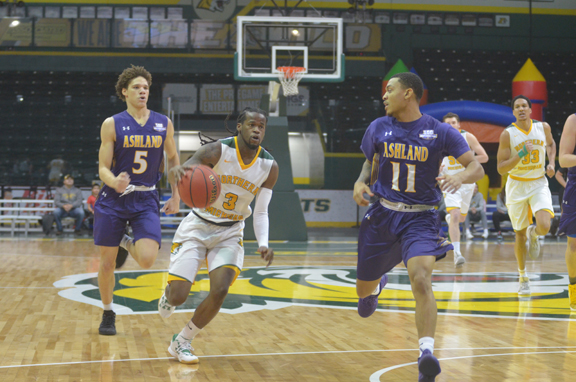 MARQUETTE — It may have taken longer than they hoped, but the Northern Michigan University men’s basketball team finally has a home win this season.

After an 0-4 start at the Berry Events Center, the Wildcats picked up a 74-61 win over Ashland, ringing in the new year on a high note in NMU’s first game of the decade.

The victory would seem to be a monkey off the team’s back, with players taking a victory lap around the court, offering full smiles while high-fiving and thanking the Wildcat faithful for their continued support.

Players like Marcus Matelski, Sam Taylor and Alec Fruin had every reason to smile, as that crop of upperclassmen paced the NMU offense by scoring in double figures.

Matelski finished with 18 points while Taylor had 17 and Fruin 13.

“We’ve been waiting for this for a long time,” Matelski said of the home win. “We’ve prepared well for some games, others we didn’t execute as well. To get a win at home against a really good team who has been good in the GLIAC for a long time, it feels really good to have that be our first home win of the season.”

Forty-two of the Wildcats’ 74 points came from beyond the arc as they drained 14 field goals from 3-point range. It’s a focal point of the offense, according to Matelski, who had five of those triples.

“We’ve been shooting a lot in practice,” he said. “We’ve had some dismal shooting days here at the Berry, so it felt good to have some go in the rim. That’s our offense, score layups, shoot 3s. When it works, we’re really good.”

“What we see every day, we want to get 3s and we want to get layups,” the first-year coach said. “What happened (tonight) is that we started off by hitting a bunch of 3s, and we did a nice job of not just settling in the second half and starting to attack more.

“We kept making them, but long-term that’s what I picture our team looking like. Lots of 3s and lots of rim attacks as a result of getting the floor space because of those 3s.”

It was also Majkrzak’s first win inside the BEC as head coach of the Wildcats, losing his first four home games including the last one to NCAA Division III Ripon College.

Majkrzak said it felt good to finally pick up that home win to begin 2020, especially after a lengthy holiday break where the team had to reflect on a two-game skid.

“It’s been kind of a thing that hangs over your head a little bit,” he said. “Especially when you lose the last game to a team we were quite a bit more talented than. To bounce back after that long break, after thinking about a lot of that stuff, and to go play what I think is a really, really good Ashland team, and get a win with the conference season sort of fully starting, you couldn’t ask for much more out of the first game of the new year.”

The Eagles (7-5, 0-4 GLIAC) only saw the lead twice early in the first half, the last time at 7-6. The Wildcats took the lead for good on a triple from Dolapo Olayinka and never looked back.

The Wildcats shot just a shade under 50 percent from the field, going 27 of 55. The 14 treys were made on 31 attempts, putting NMU at 45 percent there.

Derek Koch led AU with eight points, while Drew Noble and Rodrick Caldwell each had five. Both teams committed 10 turnovers.