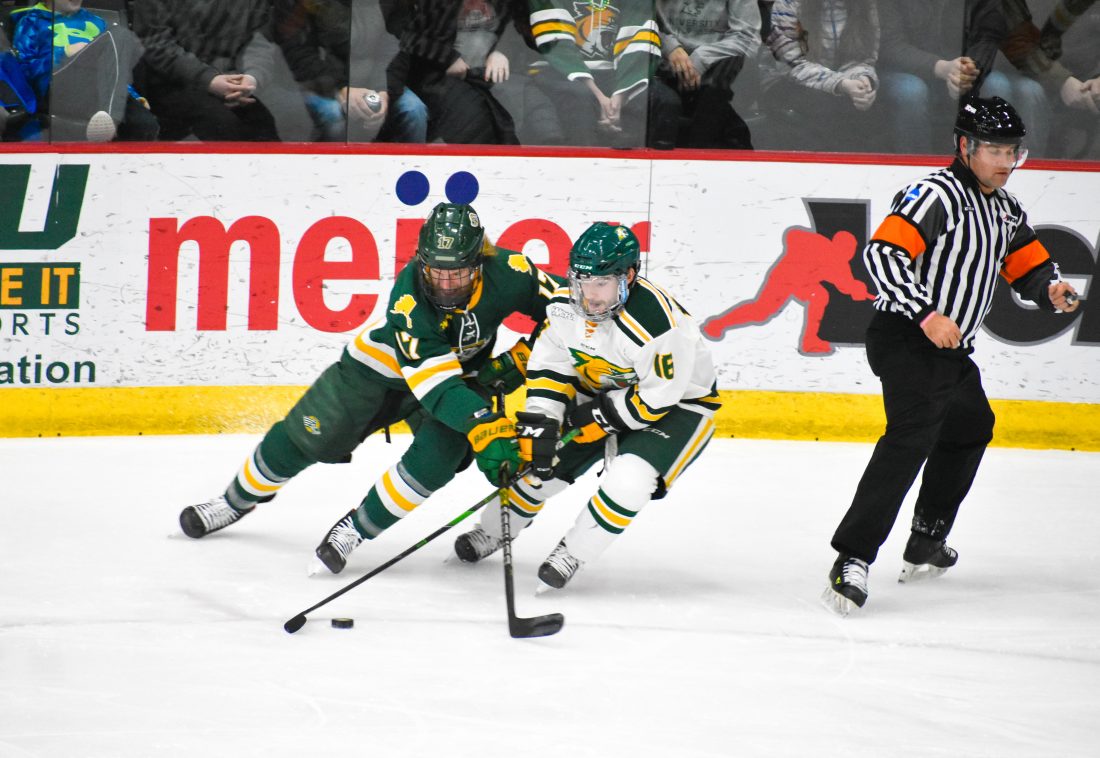 MARQUETTE — The concern for the No. 19 Northern Michigan University hockey team going into this weekend was if it would suffer a hangover against struggling Alaska Anchorage after the Wildcats swept No. 15/16 Bowling Green State on the road.

NMU put those concerns to rest in a win Friday night and then took that momentum into Saturday as it exploded for four goals in the third period, three of them from forward Vincent de Mey, as the Wildcats swept the Seawolves 6-3.

“I’m glad the weekend’s over,” Northern head coach Grant Potulny said. “Obviously, we talked a little bit about it last night that there’s danger in weekends like this. The other thing is it’s an interesting concept when you’ve been away from your rink as long as we have. We didn’t practice here for almost a month. It just feels different. Practice was quiet during the week. I thought two of the days, we walked, and as a coach, that scares you a little bit. To have some guys score tonight that hadn’t scored in a little bit is important. It was important that A.J. (Vanderbeck) got on the board and it was important that Vinny got back going again and now, we’ve got to make sure we put this behind us and I’m sure I’ll have their attention this week when we play the No. 2 team in the country (Cornell).”

The first period was one of mixed results for the Wildcats. They didn’t get many scoring chances, but they also kept Anchorage from getting many either. UAA eventually started to generate some offensive pressure in the latter half of the period and appeared to get on the scoreboard with a little more than five minutes left.

While defending an Anchorage offensive rush, NMU goalie Nolan Kent made a save in front of the net, but as he tried to cover the puck, the Seawolves’ Tanner Schachle tapped it underneath his pad. However, after a review, it was waved off. 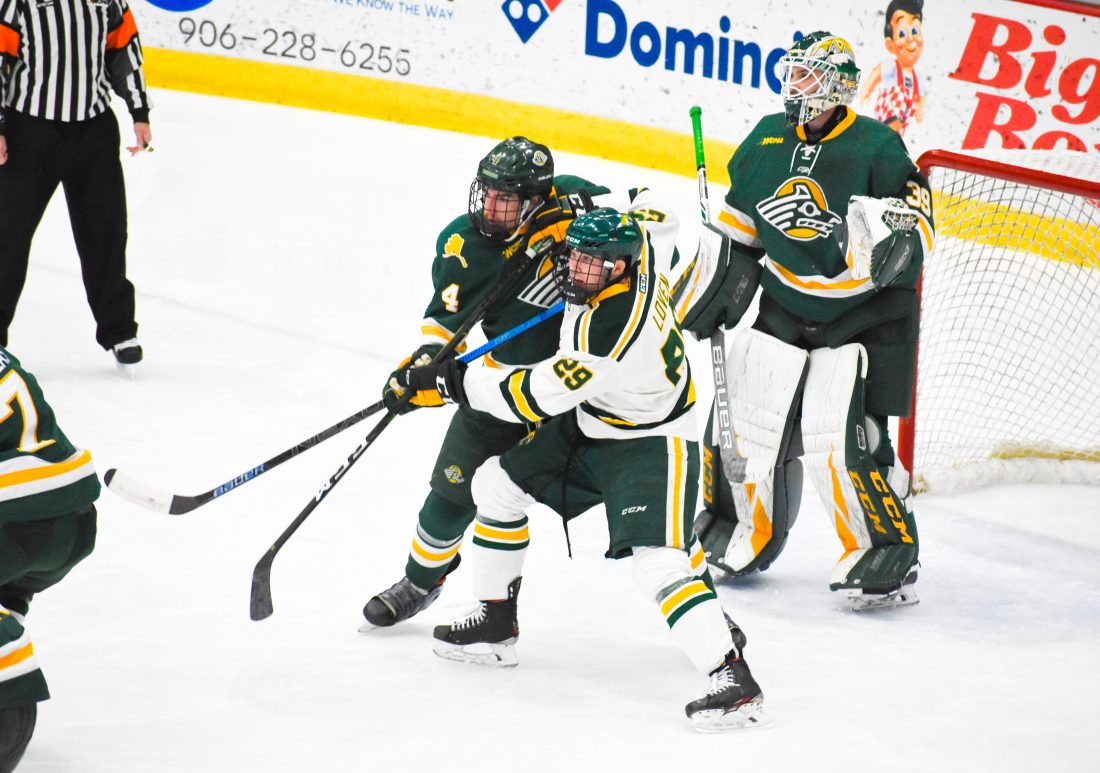 A couple minutes later, with UAA on the power play, the Seawolves almost scored again as defenseman Eric Sinclair sent a shot on net from the slot. Kent made the save, but the Seawolves’ Alex Frye checked a Northern skater into Kent and the puck slid into the net. The goal was quickly waved off and Frye went to the box for cross-checking. Less than a minute into their power play, the Wildcats took advantage as Vanderbeck beat Anchorage goalie Kristian Stead high to put NMU up 1-0 going into the second period.

“He’s (Vanderbeck) kind of what we thought he was when we recruited him,” Potulny said. “He’s an offensive player. He has the ability to find open ice and he can score. He plays well with guys that can kind of push the pace a little bit and kind of play off their back a little bit. Payner (Former NMU forward Robbie Payne) was that way. So we need A.J. to get going with some goals and tonight, he did, and I think you can see what he can do.”

Northern took that jolt of excitement with it into the next period, but was unable to get any shots on net until about five minutes in. While holding the man advantage, the Wildcats’ Darien Craighead tried to go low glove on Stead, but was denied. Craighead then tried to put in his own rebound, but was again stopped by the sophomore netminder.

NMU did cash in shortly after the penalty expired though when Mitch Slattery collected a loose puck off a faceoff, skated into the slot and snapped a shot past Stead to extend the Wildcats’ lead to 2-0 at the 6:27 mark. The Minnesota native then did the Vikings fan “Skol” clap in support of the team during their NFL playoff game that evening against San Francisco.

“I heard that they lost tonight, so a little unfortunate, but a little “Skol” chant, I had some fun with it,” Slattery said. 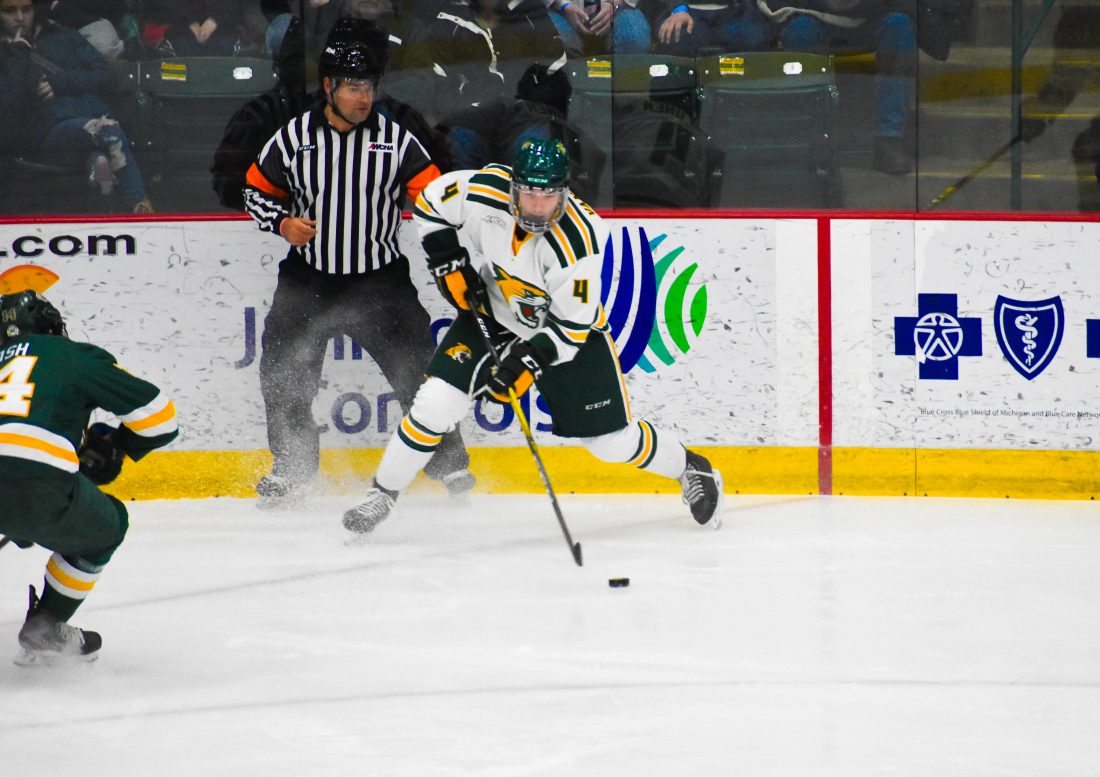 Potulny, who is also a Vikings fan, appreciated the celebration and said it took away the disappointment from Minnesota’s loss.

“I told the guys after the game that was the highlight of the night because there wasn’t much Skol clapping going on during the game,” he said with a laugh. “I was watching the game in the coach’s office. I almost chimed in with it and I wanted to, but I did appreciate Mitch’s Skol chant.”

Just like the Vikings, things started to slip away quickly for Northern after that goal. After Kent made three nice saves to help kill a penalty, he was fooled a few seconds after the penalty expired on a shot by Sinclair and the Seawolves cut their deficit to 2-1. The Wildcats almost answered back with about four minutes remaining as Luke Voltin made two nice moves to get through the UAA defense and sent a pass to Hank Sorensen in the slot, but Stead stretched out to stop Sorensen’s attempt.

Northern’s slide continued early in the third period as UAA’s Taylor Lantz beat Kent low to tie the game at 2-2 at the 2:02 mark. The Seawolves couldn’t celebrate for long though as the momentum quickly shifted back toward the Wildcats as de Mey picked up his first goal of the night on a great move, getting Stead to go low to make a kick save and then veering around him to tuck the puck inside the left post. The floodgates opened not long after that. At the 5:53 mark, Voltin scored from the slot to pad Northern’s advantage to 4-2. Less than a minute later, de Mey picked up a shorthanded tally and then got his third goal off of a faceoff in the Seawolves defensive zone at the 10:11 mark. Stead was then replaced in net by Kris Carlson.

“I’ve been shooting the puck and obviously, you guys know that I’m in kind of a drought lately with scoring,” de Mey said. “I’ve been getting four plus shots a game, so I’m just trying to get the puck on net and getting into positions and tonight, I got rewarded.”

The Seawolves got one more goal with less than two minutes remaining when Rylee St. Onge scored on a power play.