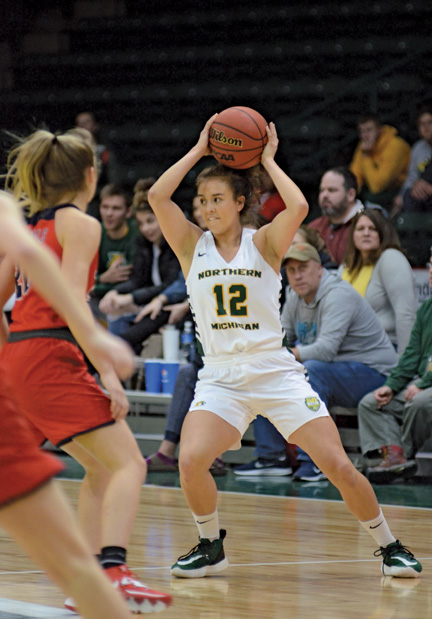 Northern Michigan University’s Amber Huebner looks to make a pass in a GLIAC game against Saginaw Valley State on Dec. 7 at the Berry Events Center in Marquette. (Journal photo by Amy Grigas)

MARQUETTE — The Northern Michigan University women’s basketball team seeks to even its overall record and win for the third time in four GLIAC games when the Wildcats host No. 4 Ashland at 7:30 p.m. today at the Berry Events Center.

Northern hasn’t played since a 68-28 loss at Michigan Tech on Dec. 15, which followed home wins over Northwood and Saginaw Valley State to open the conference season earlier in the month.

Ashland was also a national top-10 team when the Wildcats split with the Eagles in games less than week apart during the postseason last spring. Northern lost 65-58 in the finals of the GLIAC Tournament on March 10 before coming back for a 64-57 victory in the opening round of the NCAA Division II national tournament at the Midwest Regional held in Springfield, Missouri, on March 15.

During the regular season last year, Northern won at Wayne State 69-56 and lost at Ashland 71-55, also right after the start of the new year.

Seniors Erin Honkala and Jessica Schultz lead NMU in scoring, both just under double digits in average scoring at 9.6 points per game for Honkala and 9.4 for Schultz. Honkala also leads the Wildcats with 7.1 rebounds a game, with Schultz second at 5.9, while on blocked shots, Schultz leads the team at 0.8 per game and Honkala is at 0.7.

Ashland has earned its No. 4 national ranking with an 11-0 overall and 3-0 GLIAC records, having beaten Lake Superior State, Ferris State and Wayne State in league games so far. Members of the GLIAC South Division, the Eagles are one of only two teams with a perfect league mark, the other Grand Valley State, which has identical 11-0 and 3-0 marks with Ashland.

Wayne State is 7-4 overall but only 1-2 in the conference.

Video from both upcoming games is available at https://portal.stretchinternet.com/nmu/ and audio at https://streamdb7web.securenetsystems.net/ce/wupt. Live stats for today’s game are available at http://nmuwildcats.com/sports/wbkb/2019-20/boxscores/20200102_jvds.xml and for Saturday’s game at http://nmuwildcats.com/sports/wbkb/2019-20/boxscores/20200104_2lfp.xml.