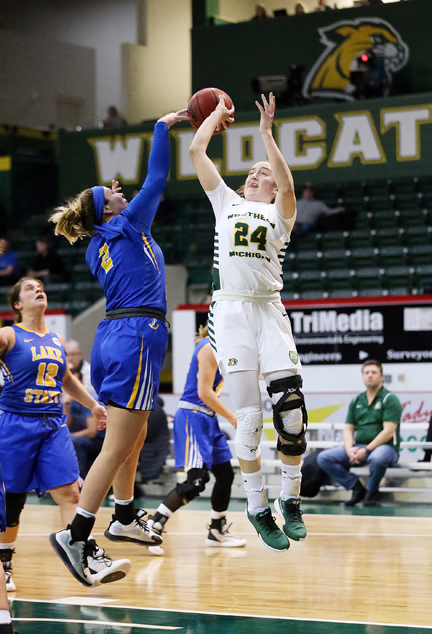 First there was a buzzer-beating 58-55 heartbreaker at Wisconsin-Parkside the previous weekend and then a 66-60 defeat at home to Ferris State on Thursday.

But on Saturday, the Wildcats shook off those losses, dominating Lake Superior State from start to finish in a blowout 72-39 win.

One of the reasons Northern (8-9, 5-4 GLIAC) fell short against Ferris was a lack of energy surrounding the team, according to Schultz and Honkala, adding the team made sure to address it before taking on the Lakers.

“We had a talk after the Ferris game in the locker room,” Schultz said. “We didn’t have the energy that we wanted coming out of the half. Even during warmups at the beginning of the game, no one had energy really and that really helps.

“Like (Saturday) on the bench, the energy was incredible. There was a play in the first quarter and I looked down at the bench and I’m like ‘Guys, that’s the energy we need all game.’ It was crazy and I was so proud of our bench and the effort they put in. It just makes it so much more fun.”

“If we keep the energy that we had (Saturday) the whole time, I can believe we’ll be able to be successful for the rest of the season,” Honkala added.

NMU head coach Troy Mattson also noticed the increased energy and said that’s what he was going to remember about the win.

“I think the biggest thing we take from the game is what the girls said,” he said. “Everybody wanted to be involved, whether they were people on the bench or people that got out on the court.

“So they showed up today and we need to do it every single day. We need to show up and if we do, I think we’ve got a chance to make a push toward the end here. Kind of like we were in the same situation last year. Hopefully, that was our turning point right there.”

NMU was hot from the start in the first quarter as it went on an 8-0 run, including two layups by Schultz and a 3-pointer by Liz Lutz to put the Wildcats up 12-2 with 3:10 remaining. Northern led 15-6 after one quarter.

The Wildcats continued to roll in the third quarter. Baskets from Schultz, Elena Alaix and Liz Lutz helped put Northern up by 20 at 37-17 with 3:37 left. Later in the quarter, Mueller beat the shot clock for a jumper and two free throws from Honkala helped NMU hold a 48-24 advantage heading into the fourth.

A Mueller jumper with 8:31 remaining put the Wildcats up by 30 at 54-24 and they stayed comfortably ahead the rest of the way. Ishpeming alum Madigan Johns also got on the scoresheet with 21 seconds left as she knocked down a trey from the corner.

“Jessica is really playing good,” Mattson said. “Not from the standpoint where she’s been scoring like 20 every night; (she) had a pretty good offensive night tonight, too, but she’s a great passer. We got our offense set around her and Erin’s learned to be a good passer.

“Emily threw some incredible passes late in the game out of the post to hit people in the open. It’s been going on all year.

“And it makes things look a heck of a lot easier when the ball’s going in the basket.”

The Wildcats head to the Grand Rapids area this week to play at Davenport on Thursday and at Grand Valley State on Saturday.