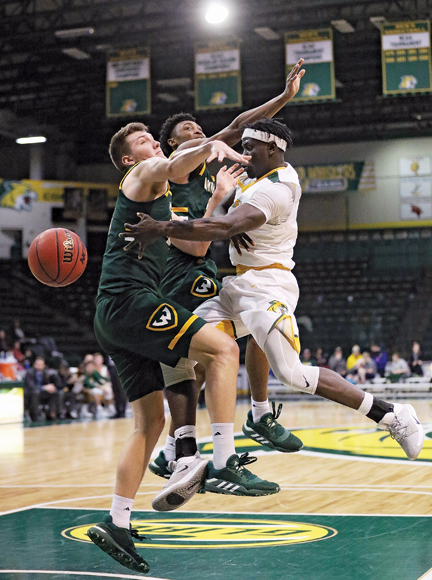 Northern Michigan University’s Dolapo Olayinka, right, gets a pass off under the rim as Wayne State’s Nate Talbot, left, and Kylin Grant contest the play during their game played Saturday at the Berry Events Center. (Photo courtesy Daryl T. Jarvinen)

MARQUETTE — Balance is important to a consistently successful basketball team.

The Northern Michigan University men definitely fulfilled that requirement Saturday afternoon as the Wildcats made 11 3-pointers and slowed down Wayne State’s biggest offensive threat on their way to a 58-55 win.

NMU’s hot 3-point shooting may have grabbed fans’ attention, but the consensus in the postgame news conference was that something else was the key to victory.

“We’ve kind of ran from that. We’ve embraced the fact that defense is going to be the cornerstone of this year’s team in particular. Our strength is those older guys, in the past, were great defenders and they have to continue to be great defenders.

“I think they’ve done a great job of bouncing back to that identity. Maybe going into break, we spent a little too much time in trying to fix our offense and got away from what our identity is a little bit.”

“I think that is what won us the weekend,” Howard said in agreement about the defense. “We were able to hold Ashland until four minutes left and I think they had 48 points, and then out there against Wayne, where we hold them to 55 points.

“Looking back at the box scores, they’re scoring in the high 60s and low 70s and things like that.

“Neely and (Karim) Murray only combined for 25 points and Neely himself averages 20. So I feel like Sam and Alec did a great job on him and coach had a great game plan trying to take away his left hand and we did some good things against him.”

Northern was hot from the opening tip as Howard quickly put in a reverse layup on the team’s first shot attempt. The game went back and forth until Marcus Matelski and Fruin hit back-to-back treys to put the Wildcats up 11-6 with 13:25 remaining in the half.

As the half wore on, it seemed like every time the Warriors (4-5, 1-4) put in a bucket, Northern had an answer. After Murray put in a layup, Howard dropped in a hook shot. When James Gordon IV knocked down a triple, Fruin hit one of his own.

“I think that’s been our setup the whole week, and honestly’ the whole year,” Fruin said about shooting from the perimeter. “Just trying to get extra shots in and continuing to improve our individual game. Obviously, we’ve had a few games at home where we did not shoot well. So I think it was really nice for a change to get hot at home and that extra work is finally paying off for us.”

The second half started off rocky for the Wildcats as WSU opened on a 7-0 run, but Fruin stopped it with a triple. With 13:05 left, Howard hit a 3-pointer, and with 12:07 remaining Troy Summers put in a layup off a feed from Taylor to push Northern’s lead back to nine at 43-34.

The Warriors wouldn’t go away, though, as they slowly cut down the Wildcats’ advantage, whittling it to two with 4:48 left on a layup by Nate Talbot.

However, a Howard tip-in helped get the lead back to five with 2:52 left and Taylor regained a two-possession lead at 55-49 with 1:05 remaining. The Wildcats then got some free throws from Taylor and Fruin in the final minute to nail down the win.

“Whether that’s all wins or not wins — just a long stretch of good play, not just one great weekend.”

Northern heads to Purdue Northwest in Westville, Indiana, on Thursday and Wisconsin-Parkside in Kenosha, Wisconsin, on Saturday.