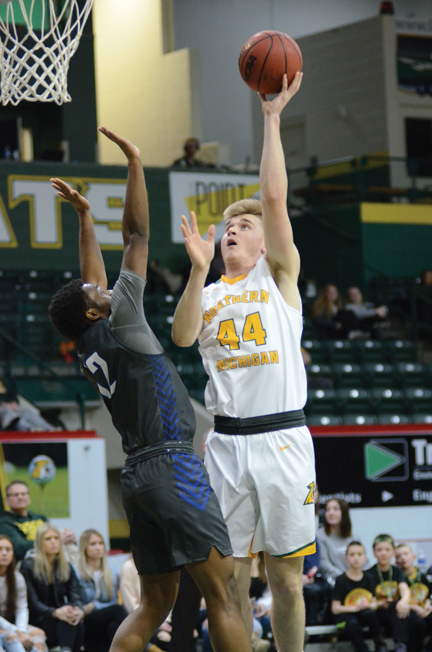 Northern Michigan University’s Troy Summers, right, goes up for a basket against Lake Superior State’s Nigel Colvin during their GLIAC game on Saturday at the Berry Events Center in Marquette. (Journal file photo by Amy Grigas)

For the men, they were coming off a good defensive performance two days earlier, holding now-No. 13 Ferris State to its lowest point total of the season, but thanks to some poor shooting, the Wildcats (8-9, 5-4 GLIAC) were dealt a defeat.

A win over the Lakers would be a good bounce-back for NMU before it spent the next four games on the road.

Meanwhile, for the Northern women, they lost a heartbreaker to Wisconsin-Parkside, then let a potential win slip away against Ferris. The LSSU women, on the other hand, have been struggling all season and a victory over the Lakers could give the Wildcats (8-9, 5-4 GLIAC) a confidence boost before the road trip.

Both programs got the wins they desired with the men keeping the Lakers to just 40 points. That’s the first time the Wildcats have held a team to 40 points or fewer since the 2001-02 season. The win also put Northern in fourth place in the GLIAC North Division and seventh overall in the league.

“That was our best weekend of the season, defensively for sure,” NMU men’s head coach Matt Majkrzak said Tuesday. “I thought it was pretty consistent for both games, which was nice to have happen. That’s been the most positive thing and the offense has been kind of a work in progress. But the defense has been relatively consistent.”

The women, on the other hand, blew out the Lake State women by more than 30 points with almost every player scoring. These Wildcats are tied for third with Michigan Tech in the North and tied for fifth overall.

“I thought the ball really moved well during the game,” NMU women’s head coach Troy Mattson said. “When you’re playing the better teams and you’ve got new people out there, and freshmen out there, sometimes the ball doesn’t get to where it needs to get as quickly as you’d like to.

“But I thought the ball moved extremely well. I told the girls after watching film (Monday), I said if I could imagine what our offense would look like, it would look like this every single night. Obviously, the competition level makes you do things differently, but I was proud of that.

“I thought we did a great job on the offensive glass in the second half. We’ve been afraid to go to the offensive glass. I’m not going to sit here and lie to you. We have very little room for error and when we’re playing teams that want to fast break us like Ferris State and Wayne State and Ashland and Parkside, we can’t give up baskets in transition and think that we’re going to be able to counter that by coming down and finishing plays all the time, because we just don’t have that room for error.

“So we’ve been running back on defense and one of our strengths is actually, probably, on offensive rebound. Maybe the two or four points you get out of an offensive rebound, you might give up six or eight on the other end, and we just can’t afford to do that.

“We got a lot of second-chance opportunities and kept possessions alive. So that was encouraging also. But yeah, we take those type of things away from it and try to improve for the next game.”

The NMU teams take on Davenport today as the Panthers’ programs are heading in different directions.

The DU men (14-5, 6-3) won the GLIAC last year and are currently second in the South Division, while Saturday’s opponent, No. 11 Grand Valley, leads that division at 15-2 overall and 8-1 in league games.

“(Davenport is) very good,” Majkrzak said. “They were the pick to win the league this year and they won the league last year. I would say talent-wise, they’re right there with anyone else in the league. I think they started out the year not playing their best, and now, they’ve won six in a row. They’re as good a team as we’ll play all season.

“Then it doesn’t get any easier on Saturday. I think we have two of what I would say are the four best teams in the league right now, we play two of them coming up, both on the road.

“Obviously, for us to win one, we’re going to have to play our absolute best and probably defend really well and then make some shots.”

The Davenport women, however, are one of the conference’s worst teams this year as they’re 5-12 overall and winless in the conference at 0-9. Despite the Panthers’ record, the Wildcats aren’t taking them lightly, especially considering a win would build momentum going into Saturday’s game with No. 3 GVSU (16-1, 8-1).

“They haven’t won a game in the league and they’re playing a couple of freshmen, but they still have a very good player in (Jenna) Falkenberg,” Mattson said. “She’s a big young lady and she takes up a lot of space inside and she’s tough to score around and they’re going to sit in a 2-3 matchup zone all night long.

“And if you don’t make shots, you’re going to get yourself in trouble. Obviously, we don’t want to do that. So it’s going to be a little bit of a challenge there, making sure that we’re making shots. You’ve got to make shots when you’re on the road. After sitting in a zone all night long, you’ve got to step up and make them.”