No Wildcat hangover for Northern Michigan University: No. 19 NMU gets 4-1 victory over Alaska-Anchorage 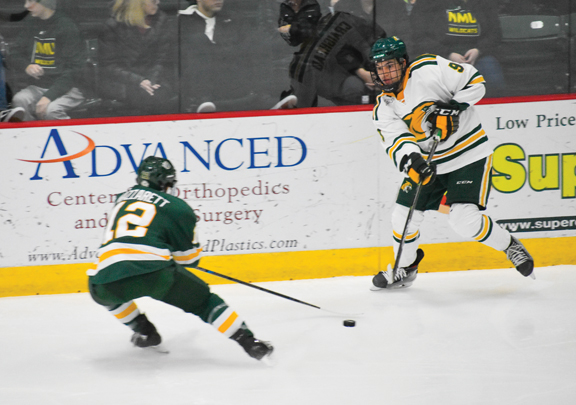 MARQUETTE — Heading into Friday night’s game against Alaska-Anchorage, the Northern Michigan University hockey team was feeling pretty confident in itself.

The Wildcats were back into the nation’s top 20 at No. 19 and had won three straight games over ranked opponents.

However, they were about to take on a struggling Seawolves team and the question was whether NMU would take a step backward playing against a squad near the bottom of the WCHA.

For part of the game, it looked like that might be the case as the Wildcats were slow out of the gate. However, they started to get it together as the game progressed and got two third-period goals to earn a 4-1 win over the Seawolves.

Northern goalie Nolan Kent finished with 23 saves to get his fourth straight win in net. With the victory, the Wildcats (12-7-2, 10-5 WCHA) stayed in third place in the WCHA, four points ahead of Bowling Green State.

When asked if there was any concern about playing a team like Anchorage after ranked teams like Minnesota State and BGSU, NMU head coach Grant Potulny said he was slightly concerned, but that overall it shouldn’t matter because the team should be prepared heading into it.

“The reality is you’re coming off two emotionally high weekends,” he said. “Not necessarily that it’s Anchorage. It’s just anybody you play after those. You play the (then) No. 1 team in the country (MSU) and then you play a team that you’ve had big time rivalries in the playoffs (BGSU).

“We end their season, they end our season. So you’re emotionally jacked up for that. You are concerned about a little bit of a hangover coming out of those games, but hey, you’re a Division I athlete, your job is to prepare yourself for the game.”

Speaking of those victories over the Mavericks and Falcons, Wildcats captain Phil Beaulieu said they were important as Northern tries to earn home ice in the WCHA playoffs.

“That win over Mankato going into break was huge for us I think because all over break, we were feeling a little better about ourselves and I think that carried over into the week we got back before we played Bowling Green,” he said. “We had a great week of practice and it just kind of bled into the second half. So I’m happy where we’re (at) right now, but by no means do we want to get complacent. I’m happy where we’re at but we’ve got to keep going too.”

The first period started off slowly until about midway through when NMU started to put some pressure on UAA goalie Kris Carlson.

With 9:47 left, Joe Nardi had the puck in front of the UAA (3-13-3, 3-10-2-2) net and got a shot off, but Carlson got a piece of it with his leg. About a minute later, though, the Wildcats got one past the junior netminder as Nardi got a pass from Andre Ghantous in the slot and then backhanded it over to Griffin Loughran. The nation’s goal-scoring leader then beat Carlson blocker-side to put Northern up 1-0.

NMU’s lead didn’t last long, though. After the Wildcats’ Brandon Schultz was called for tripping, the Seawolves went on the power play with less than eight minutes left. The Wildcats did a pretty good job keeping UAA under control in their defensive zone, but then a good play got the Seawolves on the scoreboard as Zach Nazzarett got a cross-ice pass by the near post and shot the puck into a wide-open net.

NMU had two decent chances to get the lead back before the end of the period, but Carlson made both saves on shots from Luke Voltin and Michael Van Unen to keep the game tied 1-1.

“I thought we were a little sleepy to start,” Potulny said. “You really notice that in your special teams. We got a power play early in the game and we didn’t get a shot on net. Then they score a power play goal. I thought some of our top guys made some plays tonight to help us win the game. I thought Nolan made some saves.

“Again, you play to win the game, so I’m pleased with that. But overall effort, I thought we were just OK.”

Just like the first period, things were pretty slow for both teams in the second. NMU didn’t generate its first good scoring chance until 9:27 remained when Schultz found Vincent de Mey in the slot, but de Mey’s shot was deflected high by Carlson. A minute later, Loughran tried the same play, sending the puck to Darien Craighead in the slot, but again, Carlson made the save.

Finally, with 2:07 left, the Wildcats cashed in as Beaulieu snapped a shot on net that found its way through traffic and past Carlson. Northern then took its 2-1 advantage into the third period.

UAA had their last good scoring opportunity early in the third while it was on the power play. With a Wildcat in the penalty box, the Seawolves’ Luc Brown sent a shot on net in front that Kent didn’t see and had to scramble to the post to cover it up in time.

Midway through the period, NMU started to break down Anchorage’s defense. With 10:52 left, Garrett Klee’s weak shot by the near post looked to have been saved by Carlson, but the puck managed to trickle under his pad and into the back of the net.

A little more than two minutes later and with the Wildcats leading 3-1, Craighead put the finishing touch on the win as he got a pass in front of the UAA net and tucked it past Carlson.