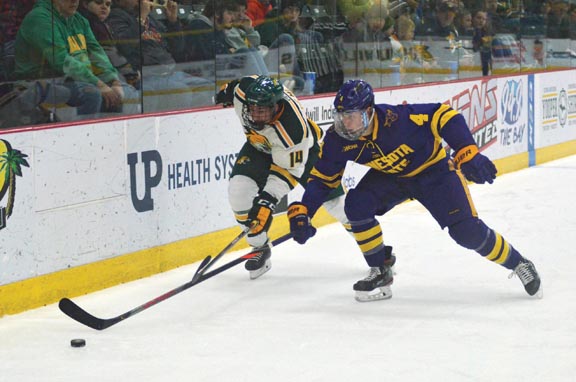 MARQUETTE — Sometimes all it takes is one big victory and the fortunes of a team will turn around.

That appears to be the case for the Northern Michigan University hockey team. In November, the Wildcats (11-7-2, 9-5 WCHA) went through a four-game losing streak, including a sweep by rival Michigan Tech. Heading into the holiday break, NMU needed a good victory to go into the second half of the season with a little momentum and it got that win by outlasting now-No. 3 Minnesota State.

With the second half starting last weekend, the big question was whether all that momentum would disappear after the Wildcats didn’t play for three weeks. And the first team out was a road trip to Ohio to face then-No. 11 Bowling Green State.

As it turned out, the long layoff didn’t seem to affect Northern as it looked sharp in a win Friday, then overcame some costly penalties to earn a comeback overtime victory Saturday to sweep the now-No. 16 Falcons.

For his efforts, Northern goalie Nolan Kent was named WCHA Goaltender of the Week and the sweep also moved the ‘Cats into third place in the WCHA as the most pivotal part of the schedule begins.

“It was a successful trip,” Wildcats head coach Grant Potulny said Tuesday. “Winning a game in an environment like that is tough enough, but to win both of them….

“The Saturday night game was two very hungry teams competing very hard. I thought the difference in the game was Nolan really playing well and our 5-on-5 play was outstanding. Obviously, we had penalty issues that need to get figured out, but to go down and sweep somebody on the road is tough, but to do it there, it was a really good weekend.”

The Seawolves are struggling, sitting ninth in the conference and aren’t sharp on special teams as they’re tied for 40th nationally on the power play and 49th on the penalty kill.

All those things may make it seem that the Wildcats will have an easy series ahead of them, but Potulny knows his team needs to take every opponent seriously.

“Our sport’s different than any other sport and I don’t think you would see the No. 1 team in basketball or football play the last-place team in the country and have it come down to the last four or five minutes of the game,” Potulny said. “You look no further than North Dakota playing Alabama-Huntsville in Grand Forks and it came down to the last three minutes of the game. It was a one-goal game.

“That’s our sport, so there’s no easy nights. There’s no nights off. Every point is just as valuable as the last one. We have to play great on Friday. We have to have another great effort. We’re a .500 team on Friday, and Saturday we’re 7-3. We have to continue to adjust our Fridays so that we can put ourselves in chances to have big weekends.”

NMU will also have to stop a tendency to commit bad penalties. On Saturday against BG, Luke Voltin committed a costly five-minute major and two Wildcats currently take the top two spots in the nation with penalty minutes as Hank Sorensen has 69 and Griffin Loughran 65. The next closest player has 50.

Potulny is aware of this problem and when asked if any of Saturday’s penalties were good, he said no.

“No, I don’t, including mine,” he said. “We talked about it (Monday). We’re adjusting it. There’s one way I know how to adjust it and we’re doing that. It’s one thing if you’re denying a scoring chance, (or) if it’s a penalty for checking too hard, you always seem to kill those.

“But the ones that get you are the ones we’re taking. (Hits) from behinds, trippings, hookings, cross-checkings, too many men. We had a player jump out on the rink when he’s not even up. He just jumps and those are the ones that end up getting you and we have to adjust.

“We can’t expect to continue to have six (penalties) one night and eight the next and continue to keep winning. It’s just not how it works.”

Another adjustment needs to be the Wildcats’ power play. Northern is still 11th in the nation, but it’s been struggling lately and facing a team with a weak kill like Anchorage could turn that around.

“I’m disappointed in the power play,” Potulny said. “They know that and I’ve told them that. I don’t care what the percentage is. That means nothing to me. What matters is when you need a goal, or even just momentum, the power play’s got to do its job.

Despite power play issues and a tendency to commit bad penalties, Potulny is feeling positive about his team as it continues into the second half.

“We’re almost healthy,” he said. “We’re close. We’re getting good goaltending. We scored eight goals. We scored nine on the weekend, but one was an empty netter. So eight of them against a program that not many teams get to two against them each night. We got to four both nights. So that side of it is good.

“Defensively, we’ve given up very, very little 5-on-5, so all those things kind of check out to put yourself in a good spot. We’ve kind of, the last couple years, been in striking distance the second half and we’ve been able to close some ground. It’s a good start, but now, we move on to the next weekend.”