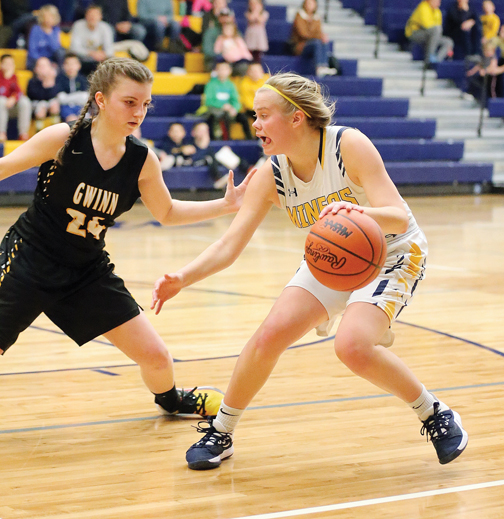 Negaunee’s Lilly Nelson, right, looks to make a move around the defense of Gwinn’s Lena Pleaugh in the second quarter at Lakeview Memorial Gymnasium in Negaunee on Tuesday. (Photo courtesy Daryl T. Jarvinen)

NEGAUNEE — Going into Tuesday’s contest against Gwinn, the Negaunee girls basketball team’s strategy was to work the ball inside the paint.

Although it took about a quarter for the Miners to find the best way to do it, they eventually did it with precision.

Leading by just two points after the first quarter, Negaunee went on a 10-0 run in the second and built up a double-digit lead in the second half on its way to a 47-34 win.

Emily Curtice was the Modeltowners’ offensive leader with 12 points.

“We wanted to get the ball inside and Gwinn came out and played a little matchup zone,” Negaunee head coach Mike O’Donnell said. “It took us awhile to kind of figure out how we wanted to attack it. We tried a couple different things and we ended up going with a straight motion and saying we’ve got to move the ball and get the ball to the back side. I think that helped.

“Once we figured it out, we kind of broke open for a couple looks underneath. We’d rather attack there than from the perimeter to start the game. So definitely, we were going to look inside, so that was where we were on offense.”

For Gwinn, it was a frustrating night as it seemed as if there were moments where the Modeltowners were on the cusp of breaking loose on offense, but they couldn’t close the gap to anything less than eight points.

“They’re (the Miners) a well-disciplined team and … we tried to go through everything that they kind of run,” Gwinn head coach Ben Olsen said. “I got like seven films on them. If you take away one thing, a good basketball team is going to counter you and get other things.

“So we tried to trail and do everything properly on our part. They’re going to know how you’re playing and OD (Mike O’Donnell) is a really good coach and he’s going to come up with counters to what you’re doing.

“I thought we had some good counters, too, putting Marissa (Delmont) in the block. I thought that kind of turned the game for us a little bit as well.

“Obviously, tonight you’ve got to give some credit to Negaunee because maybe he made a few more adjustments than what we did, or counters than we did.”

Negaunee went up 7-3 in the first quarter on a jumper by Morgan Carlson, but Gwinn’s Halle Beauchamp answered back with a trey. On the Miners’ next possession, Carlson found Hill in the paint for a layup and Hill went on to complete the three-point play. Negaunee led 10-8 going to the second quarter.

The Miners picked up eight straight points after that before Curtice ended the run with a layup. Negaunee held a 20-12 advantage going into the second half.

Trailing 32-20 going into the fourth, Gwinn started to rally. A layup from Delmont and bucket from Eliina Miilu brought it down to eight at 37-29. After Norman got Negaunee’s lead back up to 10 on a jumper, the frustration boiled over for the Modeltowners with a little over three minutes left as Olsen was handed back-to-back technical fouls for arguing with the officials as he was ejected.

“Like I said I have a Division II guard and I don’t know if she went to the free throw line a singular time tonight. When one team is going to the line and the other team’s not, there’s some questions that got to be answered….

“Obviously, the goal was not to get ejected. It was to get one, and obviously that didn’t work out. I think we’ve got to get one of these signature games.”

On the other bench, O’Donnell likes how his team is progressing in his return to the high school game.

“Chloe has been here since she was a sophomore on the varsity, but she’s never been one of the main go-to-girls. So she’s learning how to handle that and where to pick her spots. Alyssa was on the varsity last year, but she was kind of fourth, fifth or sixth option.

“Just a lot of people learning different spots. We’re still evolving on that end, but defensively, I’m really happy with how they’re buying into game plans and executing them.

“I thought we did a phenomenal job tonight. Gwinn’s got a good team. They’ve got athletes. They’ve got size and they can shoot it from the perimeter. They do a lot of different things that really force you to be locked in or they’re going to get you if you’re not.

“Our girls, I thought, were locked in all night and did a great defensive job.”