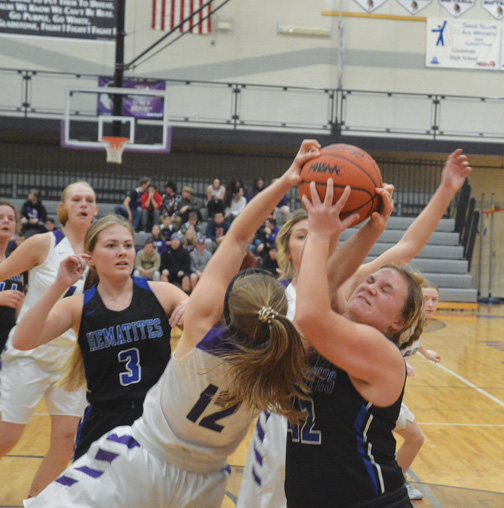 GLADSTONE — After missing most of the first half in foul trouble and with an upset stomach, Megan Crow came to life when the Gladstone Braves needed her most.

Crow scored 10 of her 17 points in the third quarter, leading the Braves to a 42-35 girls basketball victory over Ishpeming on Thursday night in a Mid-Peninsula Conference game in Gladstone.

With the 6-foot-3 Crow on the bench after picking up her second foul early in the second quarter, the Hematites (1-4, 0-2 M-PC) were able to slow Gladstone’s offense in the first half. The game was tied 5-5 after the first quarter and the Braves led just 13-12 at halftime.

Crow then began to take over in the third quarter, capping an 11-2 Braves’ run with a hook shot to make it 24-14 midway through the period. After the Hematites cut their deficit to 24-20 on a 3-pointer by Emma Poirier, Crow finished the quarter with the final four points, including a putback layup with just a second left.

“The girls play so hard for me, trying to get me the ball and playing help-side (defense) because I can’t move my feet that fast, so it’s like I have to try harder for them,” Crow said. “I depend on them and they depend on me.”

After being defended well by Ishpeming’s Rebekah Loman in the first half, Crow got more aggressive in the second half.

“I think after sitting the whole first half, she had time to think about what she needed to do once she got out there,” Braves’ coach Andy Cretens said. “She kind of got re-energized when she went out there and realized that girl was being physical with her, and she just had to attack and go out at her and draw a foul on her.

“She did a great job reading the defense and understanding how they were playing her, and she exploited that by attacking the rim hard and going at the girl.”

Leading 28-20, Taelor Zeise tripled from the right corner on the first possession of the fourth quarter to put the Braves (3-3, 2-1 M-PC) up by 11. Poirier then responded with eight straight points in just a little over a minute to cut Ishpeming’s deficit to 31-28 on a steal and score with 6:20 left.

“I’m trying to get Emma some more touches, and I thought she showed what seniors are supposed to do with a lot of dribble drives,” Hematites coach Ryan Reichel said. “We had to space the floor out with (Loman) on the bench. We were able to move the ball a little bit better (because) the lane wasn’t as clogged, and I thought Emma picked some good spots to try to get buckets for us.

“It was just too little, too late. We were in a seven-point game, and for not shooting the ball very well against a good Gladstone team, it was one of those nights where you’re like, ‘All right, we did some things that could put us in position to win.'”

Two possessions later, Crow came up big once more with an old-fashioned 3-point play to put the Braves up 34-28. After they built their lead as big as 41-33 with just over a minute to go, the Hematites had a chance to pull within four after a steal by Tia Mattila, but Zeise blocked her shot in transition with 39 ticks left to close the door.

“Taelor’s got a natural ability for defense,” Cretens said. “She moves her feet really well and she sinks her hips well, but what I was proud of and what was amazing about that was when she got that block, she had just turned it over right before that.

“She could have easily pouted about it and got upset with herself and kind of quit, but she came right back and made the biggest play of the game at that point. I’m proud of her for not quitting at that moment, which is huge for a senior leader for us.”

Crow finished with a double-double, scoring 17 points and grabbing 10 rebounds. Zeise chipped in five points, five steals and three blocks. The Braves took advantage of 22 Ishpeming fouls, going 15 for 25 at the charity stripe.

Poirier led the Hematites with a game-high 19 points.

Ishpeming, which won the JV game, is at Negaunee on Tuesday.