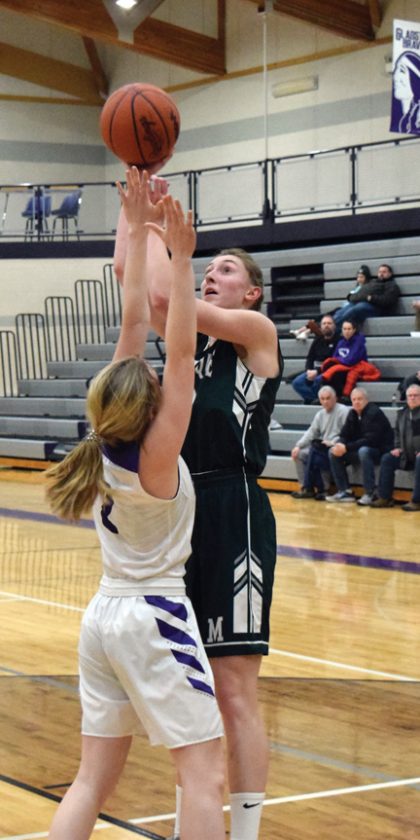 GLADSTONE — If there were any concerns about an absent Megan Crow, the Gladstone girls basketball team quickly dismissed them with a 25-point opening quarter that allowed them to cruise past Manistique 53-29 at home Friday night.

The Braves went on a 9-0 run in the first few minutes of this Mid-Peninsula Conference contest, helped along by a triple and a layup from Alaina Trudeau.

“We got off to a great start,” Braves coach Andy Cretens said. “Our seniors really got a great start for us. They really brought the energy. We talk a lot about getting off to good starts, and (not taking games for granted).

“Manistique has some great players, and they can beat you. I thought our seniors did a great job in bringing the energy and setting the tone — that’s what got us going.”

“Our first quarter was awful,” Emeralds coach Dave Winkel said. “That was the difference really. We came out too flat. We didn’t have enough energy early on, and they hit some shots. We just got down on ourselves, and you have to understand it’s a long game. You have to hang in there.”

A little over a minute later, Trudeau extended Gladstone’s lead with another triple followed shortly after by an assist to Maddie Ahlgren to make it 14-4 with 3 1/2 minutes left.

The Braves’ offense slowed in the second as they experimented offensively without Crow, and it allowed the Emeralds a chance to bounce back defensively and hold the Braves to just six more points before the half.

“We were able to kind of weather the storm, and I think (after the first) we were pretty solid,” Winkel said. “Our defense picked up, and we played a really solid game defensively after the start.”

The Braves then put it on cruise control in the second half.

Gladstone was led by Ahlgren with 13 points, followed by Trudeau with 11 and three triples.

“(Our later play) is what we’re capable of, that’s the frustrating part,” Winkel said. “We just aren’t able to do it all the time. That’s what it’s going to take for us to start winning some ball games. We have a tough schedule, and no one’s going to just hand us a victory.”