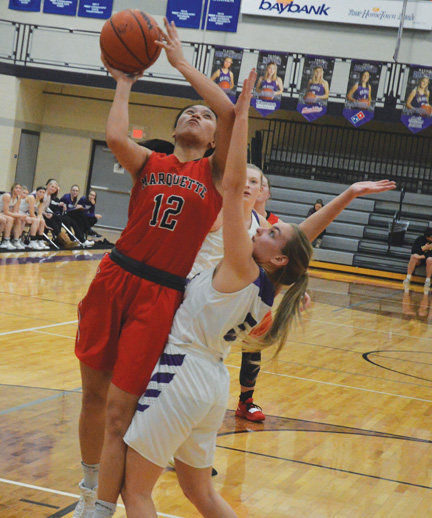 As has been the case for most of the season, the Braves played well on defense and had multiple chances to put this one in the win column, but in the end it was Marquette making the crucial plays to walk out of the Braves’ gym with a 47-44 overtime victory for its ninth straight win after starting the season 0-2.

“They (Braves) played their butts off,” Redettes coach Ben Smith said. “They deserved to win just as much, if not more than we did, but we were able to make enough plays down the stretch.”

Playing without center Megan Crow for the second staight game, the Braves hit four 3-pointers in the first quarter to lead 17-12 at the end of the quarter and 21-16 at halftime of this Great Northern Conference matchup.

It appeared Gladstone (4-6, 1-3 GNC) might start to pull away after Andie Balenger knocked down back-to-back jumpers to start the second half to give the Braves a 26-16 advantage, but the Redettes (9-2, 4-1) hung around and trailed just 32-28 after the third quarter.

After Gladstone stretched its lead to 35-30 in the fourth following a pair of free throws by Maddie Ahlgren with 2:43 to go, the Redettes went on a 6-0 run to gain their first lead with 1:28 left in regulation.

Ahlgren answered with a triple from the right corner on a shot that went around the rim and back in with 18 ticks left, putting the Braves up 38-36.

Gladstone, however, fouled Marquette’s Maria Millado on the ensuing possession and she made the Braves pay by sinking both free throws with 9.4 seconds left to knot the score 38-38. The Braves had a chance to win at the regulation buzzer, but a 3-point try by Balenger fell short.

With the game tied 43-43 in overtime, Aspen Michelin drove the lane and knocked down a short set shot from right in front of the rim to give the Redettes the lead with 45 ticks remaining.

After Marquette was called for a 10-second violation, the Braves had a chance for the lead with 7.6 seconds left. LaFave received the inbounds pass and tried a backdoor pass to Ahlgren, but Michelin intercepted it, then sank both free throws with 2.8 seconds on the clock. The Braves had one last chance but a halfcourt shot went wide.