No. 2 Westwood girls take down No. 5 Negaunee 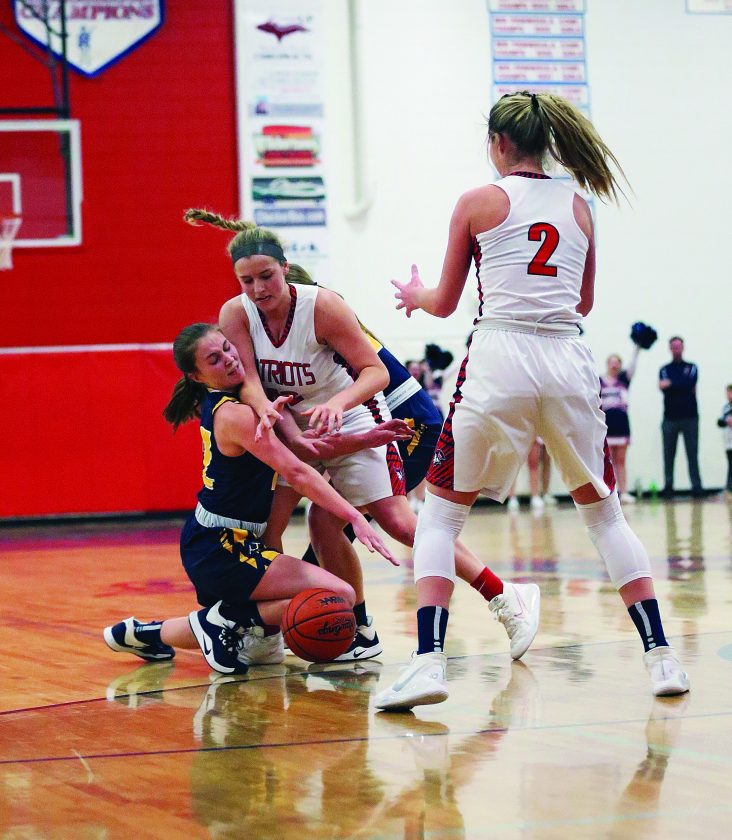 Negaunee's Chloe Norman tries to strip the ball from Westwood's Ellie Miller in the first quarter. Looking on is Tessa Leece.

ISHPEMING — It’s not March quite yet, but Friday night’s girls basketball tilt between Negaunee and Westwood had a tournament-like atmosphere to it.

In a battle of UPSSA ranked teams, the No. 2 Patriots defended their home court with a 45-35 win over the No. 5 Miners.

Westwood bumped its win streak to eight games to improve to 10-1 on the year behind 16-point nights from senior guard Tessa Leece and sophomore forward Natalie Prophet. Senior guard Madi Koski and junior guard Emily Nelson were the Patriots’ only other scorers with Koski notching 11 and Nelson two.

Prophet decided to take things into her own hands early in the second quarter after her team held a narrow 11-8 lead over the Miners after one. She came out blazing, tallying Westwood’s first three baskets of the frame, including a triple from the top to increase the lead to five at the time. Leece followed that triple with one of her own to make it a 21-13 Patriots lead, their largest of the night so far.

Prophet said she had a chip on her shoulder from the previous game against Iron Mountain, and was out for a bit of redemption on herself.

“I struggled last game and I knew that I needed to step up this game,” she said. “We weren’t hitting many shots, so I figured I may as well step up and once one fell, I just got the confidence to make some more.”

Prophet also enjoyed playing in front of a packed home gym, which was a major confidence booster throughout the night.

“The gym was erupting,” she said. “There was so much motivation and it was amazing.”

Despite the Patriots leading from start to finish, Negaunee hung around all night and never allowed the deficit to go above 11 points.

“We were supposed to win this game,” Westwood head coach Kurt Corcoran said. “All the pressure is on us and Negaunee was able to come out and play loose and they did. We beat them out of the gates quick, but we were never able to put ’em away. Kind of the name of our game this year has been getting a 15-2 run, or something like that in the third quarter and we were never able to do that (tonight). Credit Negaunee, they knew what we were doing, they played great defense in a half court set and luckily for us, Natalie was hitting (tonight). Tessa was hitting as well, I think she was almost 50 percent from the three-point line.

Corcoran added that he’s tired of the narrative that his team only has two star players in Koski and Leece. While Prophet was the one to step up on Friday, he believes his team has depth all the way down the bench.

“I think that story is a little old,” he said. “Maybe last year when Madi and Tessa were the big two options, but for a long time now, we’ve had Natalie, we’ve had KP (senior Karlie Patron), who was out with pneumonia and didn’t suit up. Obviously, Natalie is another big option. She was 3 for 4 beyond the arc, she goes inside, she’s got hang time, she’s tough to guard and she plays defense against the post, guards or anybody. She’s the complete package and it really isn’t a sense of who’s going to step up because everybody can step up. I think that’s what makes us the most dangerous.”

Negaunee’s six-game win streak came to a close with the Miners falling to 9-3 on the year.

“We battled, we can use this going forward and look back on it to clean up a few things and hopefully, compete with them down the road.”

O’Donnell added that with the recent playoff history between the two schools, the regular season contests become all the more important in preparation for the postseason.

“Anything you can get like this in the regular season is going to help you out come March,” he said. “To get these experiences, and to get these girls the butterflies and everything, it’s good to get. Negaunee and Westwood has been like this for a few years now on the girls side. These have been huge matchups. This is what you play for in the summer and this is what you work out for to play in these games. The girls were definitely excited and looking forward to this one, so it was fun for them.”

The Patriots led 25-16 at halftime before Negaunee cut the lead to five on consecutive baskets from senior guards Chloe Norman and Breanne Giotto more than halfway through the third to make it a 30-25 game. Westwood’s lead remained at just five points at the end of the quarter thanks to a triple from Negaunee sophomore guard Lilly Nelson which made it 33-28.

The Patriots were still forced to cling onto a five-point lead later in the fourth after Miller fouled out with 3:49 remaining. A pair of free throw attempts from Miners junior forward Morgan Carlson were successful to make it 39-34.

Right after that, Prophet came up big once again, hitting her third trey of the night to immediately up the Patriots’ lead yet again with 2:39 to play.

It was a free throw game the rest of the way with Westwood sinking 3 of 6 down the stretch to close things out. 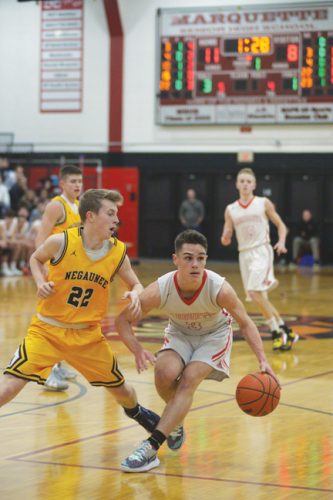