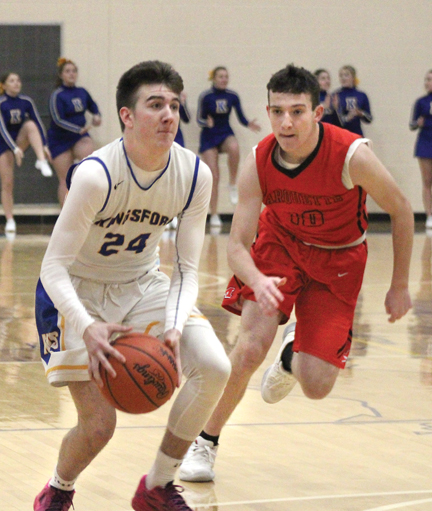 Lincoln Sager led all scores with 19 points for the Redmen, Kam Karp added 14 points, with Ty Lotterman and Isaac Johnson both chipping in 12 for the Upper Peninsula No. 3 ranked Redmen, who lost at No. 4 Escanaba earlier in the week for the first time in a decade.

The Flivvers came out of the starting gate running all over the floor, pushing the tempo in transition and scoring points. The Redmen starting five seemed lethargic in comparison to the young Flivvers and it showed on the scoreboard with Kingsford leading 17-12.

“Our starting five and into our sixth-man, didn’t have the energy they should’ve to start the game tonight and it showed,” said Marquette head coach Brad Nelson.

“We’ve been doing really well game planning and getting ready in practice to come out of the blocks hard like we did tonight, we had a really good first quarter tonight,” said Kingsford head coach Dan Olkkonen. “Then the second quarter came and we left to many points out there, missing shots, especially near the basket.”

Marquette went fairly deep in to its bench, early in the game. There was good reason for that Nelson explained “I wanted to send a message to our guys that normally play the most, that their low energy level wasn’t acceptable. It starts on the defensive end and then things offensively seem to flow better as well.”

As the second quarter started, both teams came out in half court offensive sets. The Redmen went on a 7-0 scoring run and took the lead 19-17, which seemed to take the wind out of the Flivvers.

Cole Bracket scored 10 points for Kingsford, while freshman Nick Nora added 10 points as well, but off the bench, to lead the Flivvers in scoring on the evening.

“Karp and Thompson get up the floor so fast in transition (for Marquette) and we needed to make more shots than we did tonight,” Olkkonen said. “I don’t know why, but the shots weren’t going in, especially on second chance attempts.”

In the first half, it seemed like Kingsford’s amount of offensive rebounds at least doubled Marquette’s defensive rebounds, but like Coach Olkkonen said, “the shots weren’t going in.”

Marquette began to press the Flivvers at half or 3/4 court in the second period, which disrupted Kingsford and they began to turn the ball over. The Redmen took a 33-24 lead in to the lockeroom at halftime.

In the third period, Marquette’s full court pressure and athleticism caused several Kingsford turnovers that Marquette turned into points. The rest of the second half played out fairly similar to the third quarter did.

“I’m proud of my kids effort as a whole, especially our bench players who came in and gave us the spark we needed,” Nelson said. “Dan (Olkkonen) is doing a great job with that young team. They’re going to be a good team by the end of the season.”

Marquette who improved to 5-2 on the season (2-1 in the GNC) are off until Friday when they travel to Menominee for more GNC action.

In the JV contest, Marquette slipped past Kingsford 50-48. Kingsford won the freshman game 44-34. 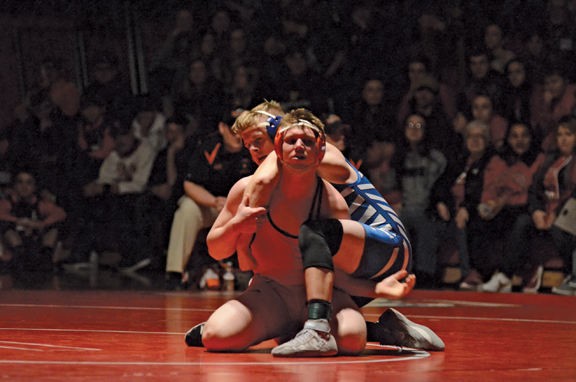