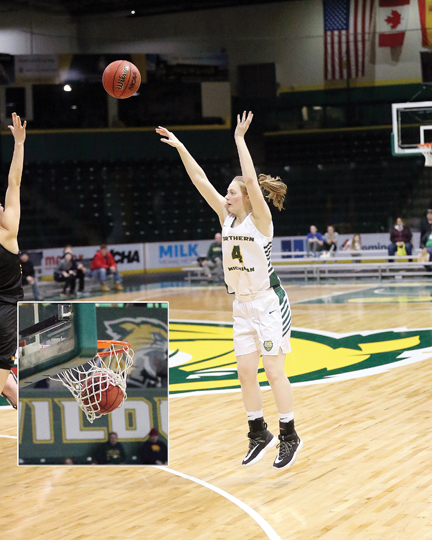 Northern Michigan University’s Elizabeth Lutz puts up what proved to be the winning 3-point shot with about 10 seconds left in a GLIAC women’s basketball game played against Wayne State on Saturday at the Berry Events Center in Marquette. The inset below shows the ball going through the net on this shot. (Photos courtesy Daryl T. Jarvinen)

“We’ve got a chance if we … pull out close games because we’re going to be in a lot of them.” — Troy Mattson, head coach, NMU women’s basketball

The Wildcats had been dealt back-to-back blowout losses going back nearly a month — a 40-point defeat at rival Michigan Tech on Dec. 15 and a 41-pointer by Ashland on Thursday, so a victory could give them confidence and momentum going forward.

NMU got that much-needed win as Liz Lutz got a pass from Jessica Schultz and drilled a wide-open 3-pointer with 10.3 seconds left to lift the Wildcats over the Warriors 58-56.

“It hasn’t been easy for us because we have high expectations, but the injuries have really taken a toll on us,” Wildcats head coach Troy Mattson said. “We needed a win today so we can keep pace with everybody else in the (GLIAC) North Division.”

He said the division has quite a competitive balance.

“I don’t think that there’s anybody in there that’s extremely good,” Mattson said. “We’ve got a chance if we can just come together and continue to play and pull out close games because we’re going to be in a lot of them.”

This game was one of those. NMU opened the third quarter with a four-point lead and got layups from Makaylee Kuhn and Schultz to go ahead 33-25 with 7:38 left. Then the Warriors (7-6, 1-4) rallied to whittle Northern’s lead to one before taking the lead with two free throws from Mercedes Wagner at 37-36 with 2:20 left. WSU took a 39-36 advantage into the fourth.

NMU trailed by as many as seven points in the fourth before climbing its way back. A putback from former Marquette Redette Amber Huebner got WSU’s lead down to four with 4:51 left, and after a scoop layup from the Warriors’ Rebecca Fugate, Schultz made four straight free throws to get the deficit down to two with 3:39 left.

Mueller tied the game at 51-51 with 2:06 remaining, but WSU’s Nastassja Chambers answered at the other end with a layup. Schultz tied it again with a jumper and then gave the Wildcats the lead at 55-53 with 41 seconds left.

That set the stage for the exciting final 30 seconds. The Warriors’ Alex Matus nailed a triple from the corner with 28.3 seconds left, setting up the Wildcats for a final shot.

Huebner drove the lane and dished the ball to Schultz. But two WSU defenders converged on Schultz, so she threw the ball back out beyond the arc to Lutz, who hit the game-winner.

“Coach always talks about stepping up and hitting big shots,” Lutz said. “So I just caught it and I just shot it and I knew I’d hit it.”

“I saw all the Wayne State girls crash down under the baseline and I was like ‘Yes, Liz is open,'” Schultz added. “So I threw it and like she said, I knew it was going in. She’s our clutch shooter and coach says it all the time.”

Mattson wasn’t pleased with the third quarter, but liked how his team toughened up when faced with adversity, then came together to get the win in the fourth.

“We just weren’t tough enough (in the third quarter),” Mattson said. “We just didn’t play hard enough. We didn’t take care of the ball good enough. We missed some shots. We had a couple wide-open 3s that didn’t go and then we missed a couple free throws.

“Because we were playing pretty good up to that point, and fortunately again for the girls when we got down six or seven, they toughened up on the defensive end. That’s where it’s got to start or else you’re not going to win the game.

“Then we were able to make the plays for the most part defensively on the other end.”

The Wildcats started off well to open the game, building a 10-point lead at 15-5 on a 3-pointer by Mueller and holding a 15-10 advantage going to the second.

WSU tied it up at 17-17 on two free throws by Ariel Bethea, but Northern got triples from Mueller and Lutz to help get the Wildcats back up by eight.

The Warriors got two straight layups from Wagner, though, and NMU only led by four at the half, 29-25.

NMU travels to Purdue Northwest in Westville, Indiana, on Thursday and Wisconsin-Parkside in Kenosha, Wisconsin, on Saturday.