Getting the job done: Westwood girls basketball team not flashy but still effective in 59-45 win over Calumet 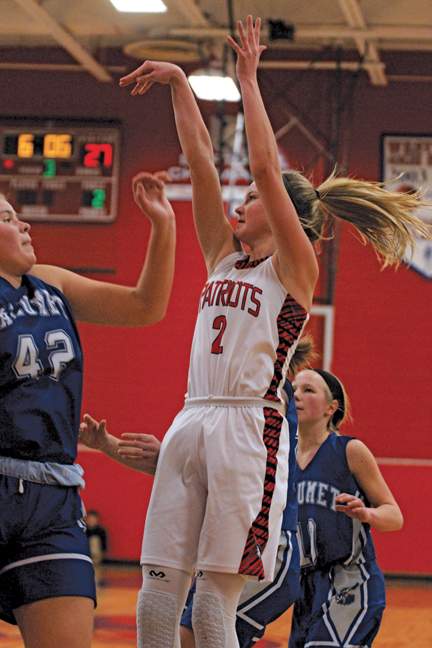 ISHPEMING — Good basketball teams simply get the job done. They may not be flashy every time they step out on the court, but they find a way to win.

That’s what the Westwood girls did Thursday night. The Patriots started off slow, but gradually built a double-digit lead in the second half before emerging with a 59-45 victory over Calumet.

“What I’m going to take out of this is that we just beat a really good team,” Patriots head coach Kurt Corcoran said. “People think that we’re these world beaters and we’re not.

“Last year, we were just winning games. Winning close games and winning games and pretty soon, before you know it, we’re 19-1 and people were like ‘Hey, look at Westwood.’ People think we’re going to beat everyone by 30 points, and that’s just not the case.

“We’ve got really good, stiff competition up here and Calumet is going to be a top-five team throughout the season. What I’m going to take out of this is that we played against a really scrappy, tough team tonight and we came away with a 14-point victory and I’m proud of the girls for sticking with it.”

For Calumet head coach Matt Laho, he felt the game got away from his team when the Patriots started to change their defensive strategy in the second half.

“They went into that 1-2-2 defense and they kind of caught our girls a little bit off-guard and we stopped attacking,” he said. “The biggest message to my girls in the locker room was just you’ve got to continue to attack.

“In the first half, they switched between man and zone (defenses) and we were able to adjust and attack and get open shots. I think, just in the second half, we stopped attacking against that defense and we weren’t getting good shots and they had girls in good positions for rebounds.”

“You’ve got to just adjust to what they’re doing and keep putting pressure on them,” Laho said.

Each team had some turnovers early, but eventually worked through their mistakes. A 3-pointer from Madi Koski put the Patriots up 10-6 in the first quarter, but Calumet answered with a putback from Alexis Strom. Westwood then got a putback from Leece and two free throws from Karlie Patron to help take a 16-10 lead into the second quarter.

The Patriots pushed their lead to seven at 22-15 on a layup by Prophet, but Calumet rallied after five straight points from Djerf.

However, Westwood wasn’t shaken and later got its advantage back up to seven at 28-21 on a jumper from Patron and a basket from Leece and took a 29-25 lead into halftime.

Things started to swing Westwood’s way in the third quarter. A three-point play from Prophet built the Patriots’ lead to double digits at 39-29, and later in the quarter Prophet fed Leece for a layup to help Westwood take a 45-34 advantage into the fourth.

The Patriots’ lead kept growing, getting to 18 points in the fourth at 55-37 on four points from Leece and a free throw from Koski. Calumet rallied to get within 12 on a triple by Djerf and a layup from Jana Loukus, but the gap was too big.

“We had an 11-point lead going into the fourth quarter and that’s when we kind of said ‘All right, let’s nail the lid on the coffin here,'” Corcoran said. “This is what good teams are able to do. We went 8 of 11 from the line in the fourth quarter, which helps put games away. If we go 3 for 11, you’re looking at a different ball game.”