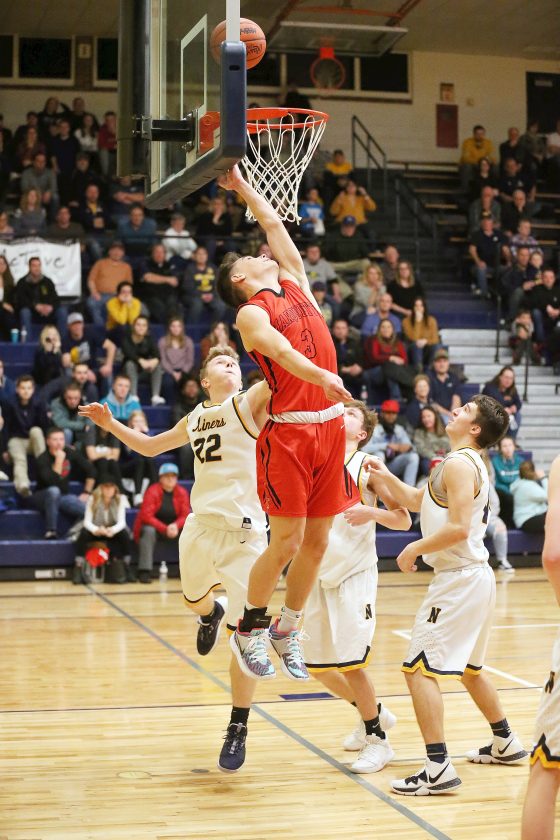 Marquette’s Kameron Karp, top, goes up for a reverse layup in overtime as Negaunee’s Drew DuShane, left, defends during their game played at Lakeview Memorial Gym in Negaunee on Friday. The Miners’ Jason Waterman is at right. (Photo courtesy Daryl T. Jarvinen)NEGAUNEE — If you weren’t at Lakeview Memorial Gymnasium on Friday night, where were you?

If you did happen to be one of the fans in attendance, you were treated to the game of the decade.

The Marquette and Negaunee boys basketball teams made an early case for it at least, with the Miners prevailing 79-73 in overtime over their rival from 10 miles down the road in front of an electric crowd at a packed Lakeview Gym.

It was Negaunee’s first win over the Redmen since Feb. 18, 2016, snapping a six-game skid to MSHS and claiming the Victors’ Cup for the first time in nearly four years.

It may not have been the complete-game performance head coach Dan Waterman wanted, but his team stepped up to the plate when it mattered most. The Miners never saw the lead until the fourth quarter when senior guard Jason Waterman drained a corner triple with 4:23 remaining, putting his side up 59-57 and sending the crowd into a frenzy.

“It was ugly for two and a half quarters,” coach Waterman said. “But you’ve got to give Marquette some credit. They came out and played hard, aggressive and fearless in a big atmosphere.

“On the flip side of that, we were down 13 points in the middle of the third quarter and you’ve got to give our kids a ton of credit for their resiliency and believing in themselves enough to just chip away. Then we made some big plays and that kind of turned it.”

Those big plays weren’t quite enough for the Miners to end it in regulation, with Marquette forcing a tie three times in the final four minutes after Jason Waterman hit his go-ahead trey to stay alive and get to the extra frame.

“We felt like we kind of had it under control and then it slipped through our fingers at the end of regulation,” coach Waterman said. “Then again, we came back, chipped away and made plays to put it out of reach in the overtime.”

The score at the end of regulation was 66-66, with Negaunee outscoring the Redmen 13-7 in the four-minute overtime period. 10 of the Miners’ 13 OT points came at the charity stripe, but it was a Jakson Sager top of the arc triple with just over three minutes to play that put Negaunee in the lead for good.

Sager is one of eight seniors on the team, and it was that group’s first-ever win over their rival.

Coach Waterman was well aware of his team’s six-game losing streak against MSHS, and he was ecstatic for his senior crop to finally get over the hump.

“Oh I knew that, trust me I knew that,” he said. “They’ve kind of been a thorn in that senior group’s side. I think they beat them once in eighth grade and haven’t beaten them at all in high school.

“I think that was a little bit of a mental block for us (tonight), and hopefully, that’s gone now. To me, the biggest takeaway is, that’s as close to a tournament atmosphere you can get in the regular season. We didn’t wilt under the pressure, we kind of thrived late in the third and early in the fourth quarter.”

Jason Waterman proclaimed the victory as one of the best he’s ever had.

“This is the best win of my career so far,” he said. “It was nice that it was at home and it’s about time we got ’em. The (Victors’ Cup) trophy hasn’t been in Negaunee in a couple of years. We knew we could beat them, we knew it was going to take a great effort and I think we gave that effort.”

As far as his go-ahead shot late in the fourth, he only wishes that one would’ve kept his team in the lead for good, as he missed a potential game-winner at the buzzer with the Miners holding the final possession.

“Those are the moments that you live for and that’s why I started playing this game,” he said. “To see it go through and hear the crowd, it was a childhood dream come true. I just wish the one at the buzzer would’ve went in. It is what it is, we won the game and I couldn’t have been more proud of our guys.”

It was also a battle of unbeatens, albeit early in the season, both teams were 3-0 headed into it, making for a Friday night showdown like no other.

Negaunee improved to 4-0 on the year, while Marquette was dealt its first loss falling to 3-1. Despite having the lead for a majority of the game and coming up short, MSHS head coach Brad Nelson saw a lot of positives out of his team who was without senior starter Drew Wyble due to injury.

“(Negaunee) made the plays in the end, but I give my guys a ton of credit,” he said.

“The way they came out for I think 28 minutes, and outplayed Negaunee, if you would’ve told me that at the beginning of the season that we’d take this team to overtime, I’d say you’re crazy.

“Negaunee, give them credit. They’ve got seniors who have been in that grind, they know how to win that type of game and there’s a lot for my guys to learn from just watching what Negaunee did in that last four minutes.”

Nelson added that free throw shooting and lack of defensive stops toward the end brought down his team more than anything, with the Redmen going just 4 of 14 at the line.

“Offensively, we were fine, free throw shooting was dismal,” he said. “We just didn’t make enough stops in the end. Typically in a game like this, you need two to three stops in a row to try to end the game, and we just didn’t get those stops.”

Marquette led 18-10 after one quarter and 30-22 at the half. The third quarter was the highest scoring of the night with the Redmen notching 23 points to the Miners’ 22, giving MSHS a 9-point lead at 53-44 going into the final eight minutes of regulation.

A Sager triple cut the Marquette lead to two points before a free throw from Waterman made it 57-56, setting himself up for the go-ahead three with 4:23 to play.

Sager led the Miners in scoring with 25 points while Waterman finished with 20. Drew Lindberg added 18 points while Alex Munson picked up 10 of Negaunee’s 26 rebounds.

Kam Karp led all scorers with a 27-point night for MSHS while Ty Lotterman had 16 points and Lincoln Sager 12, all of his coming from long-range. Lotterman led the Redmen with 6 of his team’s 26 rebounds.