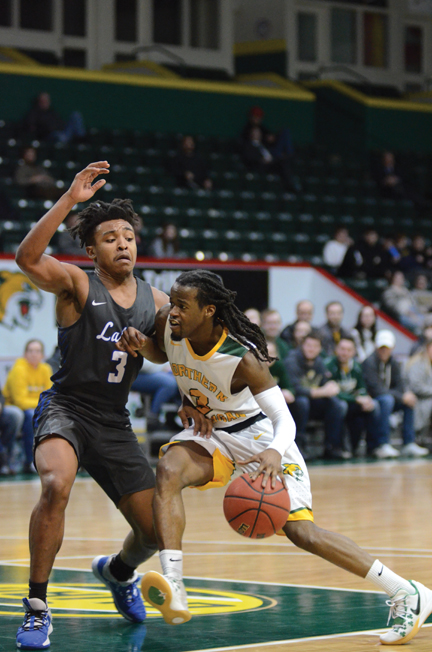 MARQUETTE — Strong defense is what the Northern Michigan University men’s basketball team is known for, and on Saturday the Wildcats accomplished something they hadn’t done in almost two decades.

NMU slowed Lake Superior State in a 65-40 blowout victory. That’s the first time the Wildcats (8-9, 5-4 GLIAC) have held a team to 40 points or less in a game since the 2001-02 season. It’s also the second straight good defensive performance for Northern as even though it lost to No. 8 Ferris State Thursday, the ‘Cats held the Bulldogs to just 61 points, their lowest total of the season.

“I think that’s the lowest anyone’s held Ferris to all year, and Lake State was, I think, at 31 when we subbed in at the end,” Northern head coach Matt Majkrzak said. “That’s as good a defensive effort as I think we can put together, and hopefully it’s something that continues.

“We run a more complicated system than what they’ve run in the past and I think they’re learning and getting better and have a better understanding of what we’re trying to do night in and night out and I think that’s showing with some of our defensive results.”

Senior guard Sam Taylor agreed with his coach and was proud of how the Wildcats clamped down on Lake State’s biggest offensive threat, Ke’Montrece Collins.

“We kind of hang our hat on defense and it starts with me and (senior center) Myles (Howard),” he said. “We just had to turn up our intensity. We tried to execute the game plan and we knew Ke’Montrece, he’s going to be an all-league player. We held him to five points and he averages 16 points a game. That was much of their offense.”

“Defense is our identity and I feel like it starts with me, Sam and (junior guard) Alec (Fruin),” Howard added. “(Sophomore forward) Dolapo (Olayinka) is coming along and being a great defender right now. (Sophomore forward-center) Troy (Summers) is coming along and getting better every single day. Even the freshmen like (guard) Noah (Parcher), and (senior guard) Marcus (Matelski) is Marcus. He’s a great defender in and of itself.”

Taylor led the Wildcats with 18 points, while Howard was dominant in the paint with 12 rebounds and four blocks.

The shooting woes that plagued the Wildcats Thursday night in the loss to Ferris continued in the first half Saturday. After going up 4-0 early on layups by Summers and Taylor, NMU didn’t score again until just over 14 minutes were left in the first half. Then midway through the half, the Lakers got into a groove. After Taylor drilled a triple with 10:47 left, Lake State (6-11, 3-6) went on a 12-0 run, seven of those points coming from Nigel Colvin.

Trailing 14-10, NMU fought back to go up 16-14, including a three-point play from Howard. Then with 4:01 left, the Wildcats started to hit their shots more consistently. Taylor dropped in a layup and hit a trey to give Northern a 21-16 lead. After a putback from LSSU’s Xander Okerlund, Taylor knocked down another 3-pointer with 40 seconds left to give the ‘Cats a 24-18 advantage at the half.

Taylor said it just took some time for the Wildcats to get comfortable shooting and once he started making his shots, it was contagious.

“Once we saw a couple shots go down, everybody’s confidence went up,” he said. “Once I made shots, it seemed like everybody started making shots.”

Northern continued to roll to start the second half as a trey by Taylor and a jumper from Matelski put the Wildcats up by double digits at 29-19.

The Lakers did get their deficit down to six on three free throws from Colvin with 16:21 left, but NMU wasn’t deterred. Back-to-back buckets by Summers got the ‘Cats back up by double-digits. A triple and a hook shot by Olayinka got Northern’s lead up to 14 at 43-29 with 10:35 remaining.

Later after a jumper by the Lakers’ C.J. Robinson, NMU broke the game open with a 14-0 run, highlighted by 3-pointers from Fruin and Matelski to make it 60-32 with 5:25 left.

Howard said a big turning point in the game was when he and some of the Wildcats’ other big players were forced to sit in the first half. He said the underclassmen stepped up during the post players’ absence and that carried over into the second half.

“I feel like our biggest thing was when I got hurt and Ben (Wolf) also got hurt and Troy was in foul trouble, a lot of guys came in and stepped up,” he said. “When that happened, we went in at halftime with a six-point lead with two of our starters out. Our third and five man out.

NMU hits the road this week, traveling to the Grand Rapids area starting at Davenport on Thursday and Grand Valley State on Saturday.