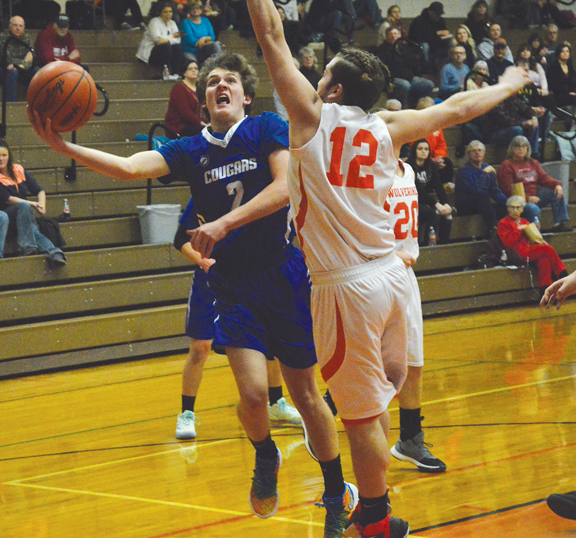 ST. NICHOLAS — A 20-point second quarter was the difference for the Mid Peninsula boys basketball team in a 52-36 home win over Superior Central on Monday.

This Skyline Central Conference matchup was tied 6-6 after the first quarter before the Wolverines (4-4, 2-4 SC) opened up a 26-14 halftime lead.

“We were in a 1-2-2 zone defense,” Cougars coach Harry Robbins said. “We said our game plan was to control the two Englunds (Zach and Michael), who are excellent athletes and excellent ballplayers.

“Zach didn’t score much (in the first quarter), but he’s just a (good) ballplayer. He ran their offense, and we gave up some 3s. We went to a 2-1-2 zone and then to man, and that’s where we’re struggling. We’re struggling defensively.”

“(The problem in the first quarter) was our flow,” he said. “We weren’t in our flow. We couldn’t do anything right. We played really good defense, but when the time came, we couldn’t (do much).”

Fifteen seconds into the second quarter, Michael Englund gave the Wolverines an advantage with a triple. The Cougars (1-5, 0-4) answered shortly after, as Kyle Frusti sank two from the free throw line to reduce their deficit to 9-8.

Mid Pen’s defense then held the Cougars to just six points the rest of the period — both coming on 3-pointers by Parker Maki, who finished with six triples and 21 points.

“Parker Maki had a great shooting game (even though) he’d been ill for over a week,” Robbins said.

Mid Pen helped its cause by hitting 7 of 8 free throws in the second quarter.

The Wolverines then maintained a comfortable lead the rest of the way.

“(Superior Central is) a good ball club and well coached,” Branstrom said. “From my standpoint, my kids played their tails off defensively. Take that away from them, and we wouldn’t have been able to do (anything).”

“I told them, you have to go and play defense,” Robbins said. “I don’t care what defense we’re in, you have to buy into it, and that’s what we’re struggling with right now.”