Ashland runs away in 2nd half past Northern Michigan University women’s basketball team, 80-39 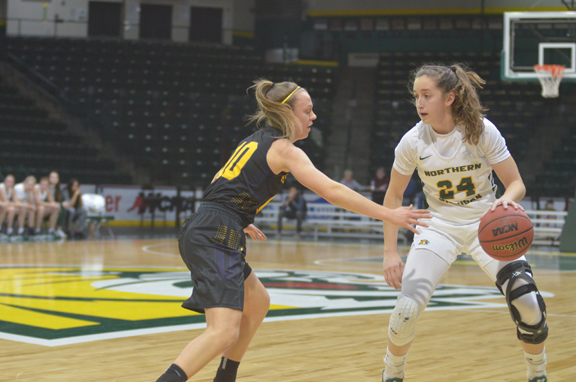 “We just don’t have the bodies to deal with them right now.” — Troy Mattson, NMU women’s basketball coach, on facing No. 4 Ashland

It’s a team the Wildcats saw twice at the end of last season, with AU besting NMU in the GLIAC tournament finals before Northern turned around five days later to pull off the upset of Ashland in the opening round of the NCAA Division II tournament.

In the two sides’ first matchup since postseason play last spring, it was the No. 4-ranked Eagles coming out on top, defeating the Wildcats 80-39 at the Berry Events Center.

Northern head coach Troy Mattson said his team was simply overmatched by an Eagles team that is off and running.

“I think we’ve got a decent game plan against them and we proved that last year, but we just don’t have the bodies to deal with them right now,” he said. “They’ve got three players that could be pretty high-level Division I players to be honest with you, and we just don’t have that quality of player right now.”

Injury and illness bugs have also hit the Wildcats, with star junior Lexi Smith continuing to be out with an injury and senior forward Jessica Schultz limited on Thursday night.

“Without Lexi out there right now, it really hampers us to find points and have people to give the ball to who actually know what they’re doing with the basketball,” Mattson said. “Jessica wasn’t going to play very much (tonight) anyway, I’m trying to save her for Saturday because she’s been so sick and hasn’t been able to practice for three days. I just wanted to give her a low run.”

Holding the Eagles to less than 90 points can be seen as a plus, as it was only the fourth time this season AU hasn’t exceeded that mark. The Wildcats limited Division II’s second-best scoring offense to just 27 points at halftime.

“I thought we played a good second quarter both on the offensive end and defensive end,” Mattson said. “Our goal was to hold them under 15 each quarter and for the first two quarters, we had one at 13 and one at 14 and we’ve got to be pretty proud of that. It just got away from us.”

NMU matched Ashland’s point total in the second quarter with 14, making it a 27-16 deficit for the Wildcats at the half. Northern was limited to just two points in the first, making for a tough climb back.

“We weren’t very aggressive early in the first quarter,” Mattson said. “We didn’t go at the basket either. I thought we had a couple of opportunities to take some shots around the basket and we were settling for jump shots and fadeaways. We talked about it at the end of the quarter and made a better adjustment in the second.”

AU drained 20 field goals in the final two quarters after having only 10 at halftime. That strong second-half shooting performance allowed the Eagles to outscore NMU 53-23 in the final 20 minutes.

For the game, the Wildcats shot 28 percent from the field, going 15 of 54. Six of those 15 shots came from beyond the arc.

Ashland had three players score in double-figures with Jodi Johnson putting up 18 points. Renee Stimpert followed with 16 and Sara Loomis 14. Johnson had eight boards for the Eagles while Loomis had seven.