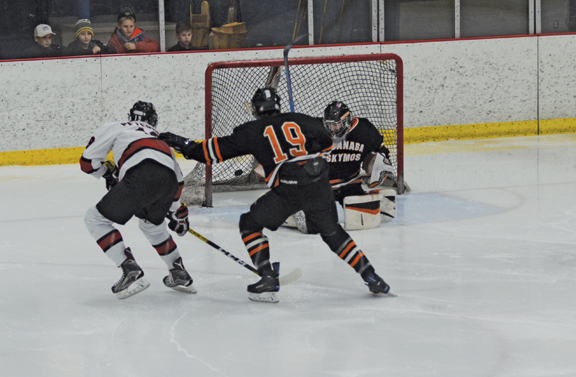 From left, Marquette’s Jacob Peterson and Escanaba’s Gunner Bordeau watches the puck go in for a goal on Peterson’s shot as Eskymos’ goalie Trevor Denome misses the puck on Tuesday at Lakeview Arena in Marquette. (Journal photo by Amy Grigas)

“Penalties are going to kill us, and if we keep doing that, eventually that’ll come back to bite you.” — Doug Garrow, Marquette hockey coach, on giving Escanaba six power plays

MARQUETTE — A lot of people will say three goals is enough to win a hockey game.

So when a team gets double that total, it’s a safe bet to say that team won its game.

The Marquette Senior High School varsity hockey team did just that in its home opener on Tuesday night, defeating Escanaba 6-1 at Lakeview Arena and pummeling the Eskymos in the shots department 47-18 as the Redmen improved to 3-1 this season.

A two-goal, one-assist night from junior defenseman Evan Kroll, as well as two-point nights from Joseph Luke, Owen Riipi, Hogan Nemetz and Dylan Baldwin, combined well as a 17-save performance from freshman netminder Liam Beerman in the MSHS victory.

“The first period was a bit sketchy with it only being 1-0,” Redmen head coach Doug Garrow said. “After that, I think we got our legs under us. Sometimes for some of these kids, their first home game, they’re a little nervous. Once they get through that a little bit, they just relax and play and I thought the second and third periods we did a much better job.”

Garrow was also satisfied with Beerman and his goaltending counterpart Brennan Hakkola, who replaces the now-graduated Tyler Bergwall between the pipes this season.

“I think our goaltending is good,” Garrow said. “Both him and Brennan, who’s a junior, I feel confident with either one of them in net. They’re both very competitive kids and they want to be good at what they do, so that’s nice to see. They challenge each other and push each other to be better and that’s a good thing.”

Despite a seemingly dominant performance, MSHS had trouble staying out of the penalty box all night, giving Escanaba six power play chances. On the flip side, the Eskymos only committed one penalty, a bench minor for too many men. The Redmen penalty kill unit held strong however, holding Esky to just 1 for 6 on the man advantage.

“Discipline is a concern,” Garrow said. “We had too many penalties (tonight). When you play teams with a potent power play, which might be Saline this weekend or Calumet next week, we have to stay out of the box. Those penalties are going to kill us, and if we keep doing that, eventually that’ll come back to bite you.”

Escanaba’s lone goal came from junior forward Nick Kolich on its third power play attempt of the night. Senior forward Ethan Silverstone found Kolich on a 2 on 1 to put it by Beerman at 4:48 of the second period, putting the Eskymos on the board to make it 2-1 at the time.

Esky head coach Matt Hughes said his team’s power play needs work, but also credited Marquette for shutting the Eskymos down most of the night.

“I don’t think we gave our best effort at times. The guys looked a little lackadaisical and give credit to Marquette,” he said. “They played hard, they were in our face all game and they just looked like they wanted it more than us. We couldn’t keep them off of our goalie, they put up 47 shots and that’s way too many shots to give up.”

Esky dropped to 1-2 on the season, but Hughes is confident it will be easy to move forward in a young season.

“Obviously this one hurts a little bit, but we’ll get by it,” he said. “It’s our third game of the season and we have quite a few new faces on the team.”

The Redmen led 1-0 after one period thanks to freshman forward Ethan Phillips’ goal just over five minutes in. Phillips put a wrister by Esky senior goaltender Trevor Denome with assists going to Luke and Kroll.

Senior defenseman Jacob Peterson quickly made it 2-0 early in the second, beating Denome on a breakaway as Nemetz fed a pass to Peterson, who was fresh out of the penalty box. That tally came 1:35 into the frame.

After Kolich’s power play goal put Esky on the board and made it 2-1, Marquette answered 52 seconds later on a goal from Nemetz, which was assisted by freshman forward Jacob Garrow to make the score 3-1.

MSHS doubled its goal total in the third, with back-to-back tallies from Kroll and the sixth goal coming from Luke with 21 seconds remaining.

The Redmen were 0 for 1 on their lone power play chance.

Marquette returns to action this weekend hosting a Friday-Saturday doubleheader against downstate Saline (0-3).