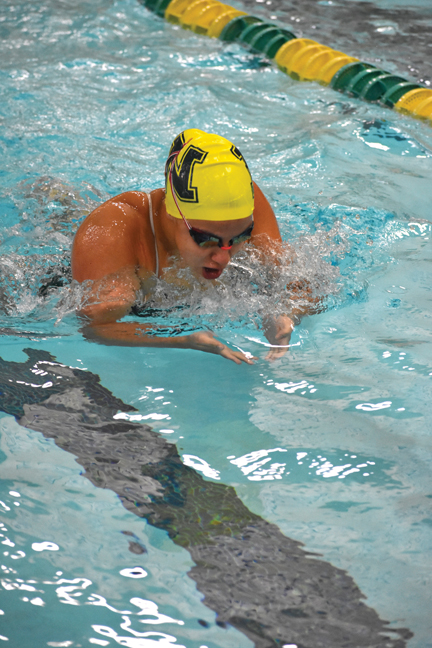 MARQUETTE — As the weather has moved into winter in the Upper Peninsula, the Northern Michigan University swimming and diving teams have been heating up the pool.

In their most recent meet, the Calvin College Invitational from Dec. 5-7, the women won it for the first time in program history, while the men took second behind champion Grand Valley State.

At the halfway point of the season, NMU head coach Heidi Voigt is pleased with both squads.

“I definitely like what I’m seeing,” she said at an NMU press conference on Dec. 10. “We had the Calvin Invite this (past) weekend, which is typically a bigger meet for us. 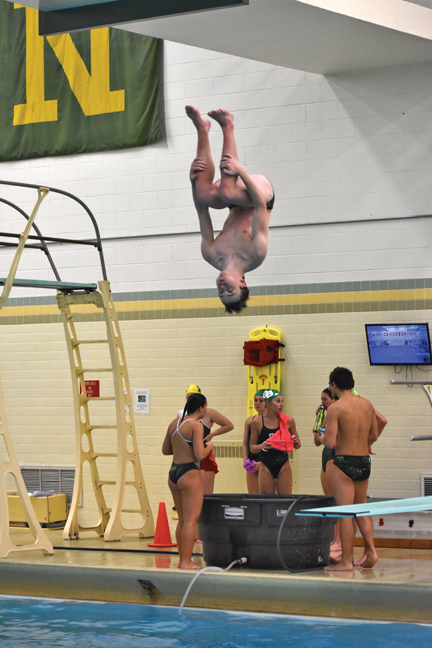 “This is the first time (our) women have ever won that invitational, which is pretty exciting because there’s bigger teams there.

“Of course, Grand Valley is there and that’s the first time our women have beat them at that meet. Also, Calvin College is there and they are a great (NCAA) Division III school. They always have really great competition. They push each other and push us to do better as well.”

When asked if there was anybody in particular that stood out at Calvin, Voigt had a hard time naming just one athlete on either team.

“There were a lot,” she said of stars at the meet. “I will say there’s lots of veteran leadership. (Past NCAA Division II champion) Rachel (Helm) is, after this weekend, second in the country in the 200(-yard) backstroke. That’s exciting for her to be on track.

“Michaela (Nelson), one of our freshmen, and Jenna (Joerger), another freshman, really had amazing and standout meets. Pilar Perello Ferrer also did well.

“And for the men, they had some standout senior leadership as well. Lajos (Budai) was second in the 100 free and he was key on a lot of relays and did really well.

“There were some good freshmen there, too. Ivan (Amillo Escobedo) won the 100 freestyle. So he’s up there pushing him, and Roberto Camera won the 100 and 200 breaststrokes.

“Ondrej Zach is a junior, but new to us this year from the Czech Republic, is fifth right now nationally ranked in the mile (1,650) and will be up there in the 1,000 as well. There was lots of great stuff.”

The swimmers may get the most attention, but the Northern divers also had big performances at Calvin.

“Our divers did really well,” Voigt said. “We had four women in that final. Mary (Grossman), one of our sophomores, won one of the boards and got second in the second board.

“I think we’re definitely in the position that we want to be. There’s definitely some little details to work on. Connor (Dorff), our diving coach, would like a little bit more on the diving side, but we definitely saw some good things happen.”

The Wildcats have a full month off until their next meet, a dual at NCAA Division I Wisconsin-Green Bay, but Voigt thinks the lengthy break will be of benefit.

“I think it will help mentally,” she said. “They’ll all need to go home and see family and friends for sure, especially, a little break from school.

“I know this meet that we go to, we always go the weekend after Thanksgiving. We got back early Sunday morning and they had finals that started on Monday. That’s always in the back of their minds, a little stressor as well, and I know that can be tough.

“I think they’re ready to get through that and have a little bit of a break from school and be at home and enjoy their families.

“They are still excited. They know we have good goals and I think, especially for the women, they know that we could really do well at conference and hopefully, beat Grand Valley again.