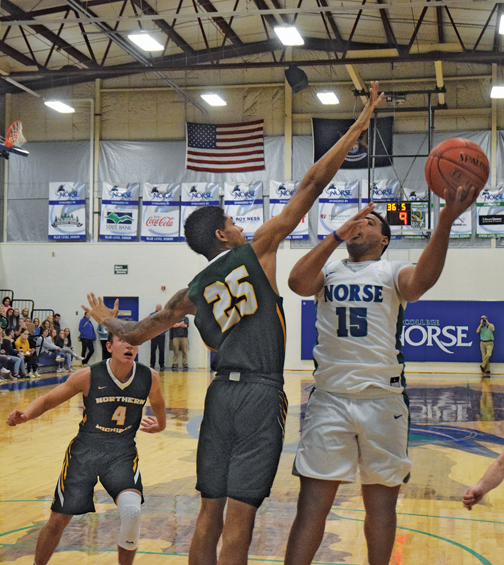 MARQUETTE — For the first time this season, the Northern Michigan University men’s basketball team will play on its home court after six games touring the country.

Last weekend, the Wildcats traveled about as far away as they ever will while competing in the Seawolf Thanksgiving Classic in Anchorage, Alaska. They were joined by Michigan Tech at this event.

NMU had a good weekend in the Last Frontier, blowing out Alaska-Fairbanks on Friday by 50 points, their largest margin of victory over an opponent since 1990, then making a furious second-half comeback Saturday before ultimately falling to host Alaska-Anchorage.

Northern head coach Matt Majkrzak was in good spirits Tuesday as he reflected positively on the trip.

“I think that’s kind of been like that all season with the ups and downs of one good game and one bad game,” he said of his 3-3 team. “The nice part was that this bad game (on Saturday) was better. We battled back.

“Anchorage is really good and they hit 10 3s in the first half. I don’t think we’ll ever be able to be ahead at halftime when a team hits 10 3s and I think the message at halftime was we needed to play better to keep it more manageable. We weren’t going to be winning with how well they played, but we needed to keep it a bit closer.

“But I was proud we bounced back. That was a really good Anchorage team and I thought we played maybe our best half, the second half against Anchorage, the whole year.

“We played really, really well (Friday). Obviously, (the Nanooks are) not as strong of a team as some of the other teams we’ve played, but they beat (Michigan) Tech for 33 or 34 minutes the following night.”

Now the Wildcats have not only their first home game of the season on Thursday afternoon, but also their GLIAC opener as they take on Northwood (4-2). Northern hosts Saginaw Valley State (4-2) on Saturday afternoon. Both opponents are on four-game winning streaks.

“Northwood is very athletic,” Majkrzak said. “They have two guards who are returners who were really good last year and are starting the year off really hot.

“I’m just hoping for a ton of energy and a ton of excitement. I think if we do that, hopefully, the results take care of themselves.”