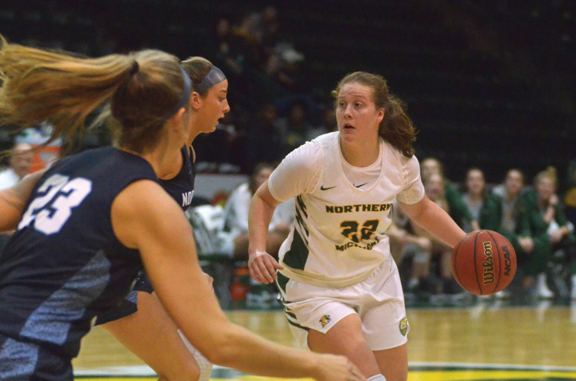 MARQUETTE — Defense is what the Northern Michigan University women’s basketball team is known for.

But the Wildcats can also be potent offensively once they get hot. They showed that ability Thursday night in their GLIAC opener against Northwood.

Down by five at the half, the Wildcats went on a pair of 11-0 runs in the third quarter and outscored the Timberwolves 24-5 in the period on the way to a 55-46 win.

“Sometimes it takes a little while to get going, but we’ll get there sometimes,” Honkala said.

In that explosive third quarter, the Wildcats started their first run with layups from Kuhn and Ishpeming alum Madigan Johns. A jumper from Emily Mueller with 5:49 remaining gave NMU its first lead since early in the second quarter at 32-31.

After Northwood’s Maizie Taylor put in a layup, Northern went on its second run, highlighted by a putback from Schultz and a turnaround jumper from Honkala. The Wildcats led 47-33 going into the final quarter.

“We actually played good in the first half,” NMU head coach Troy Mattson said. “We just couldn’t get the ball to go in the basket. So I said, ‘Hey, jump up there and watch it go in.’

“We only had three turnovers at halftime and we got good shots all night long. We couldn’t make any. Our defense was holding us in there all night long and then all of a sudden, we get an explosion on the offensive end.

“People made big plays and made big shots and make great passes. Our defense held true all night long and I’m pretty proud (of the way) we played tonight.”

A Schultz jumper with 8:58 left in the fourth gave NMU its largest lead at 16 points, 49-33, before Northwood slowly whittled down the Wildcats’ advantage. Barely two minutes later, a layup by Alli Keyser pulled the Timberwolves within 10 at 49-39, and with 1:46 left an Ellie Taylor bucket cut Northern’s lead down to seven at 51-44.

Northwood had the momentum, but Honkala ended that comeback with a layup with 1:03 left and former Marquette Redette Amber Huebner made two free throws with 20 seconds remaining to clinch the win.

“Erin is going have a great season,” Mattson said. “Things happened to her last year that bothered her a little bit and we talked a lot over the summer and she’s good to go. She’s going to be a wrecking crew out there.

“I really thought Makaylee played good at the point tonight for us and got things under control and made some big plays. I thought Madigan gave us a big spark off the bench, stopping (Ellie) Taylor out there and doing what I wanted her to do, because some people don’t do what I want them to do. I’m pretty proud the way we played.”

In the first half, the game was back and forth until the Timberwolves established control during the second quarter. Former Marquette Redette Hunter Viitala, who finished with six points and four rebounds, and Keyser each put in layups for a 25-17 Timberwolves lead with 3:24 remaining. .

Northern hosts Saginaw Valley State at 3 p.m. Saturday. The Cardinals edged Michigan Tech 60-59 in Houghton on Thursday as SVSU’s Maddie Maloney made a free throw with less than a second left to break a 59-59 tie.