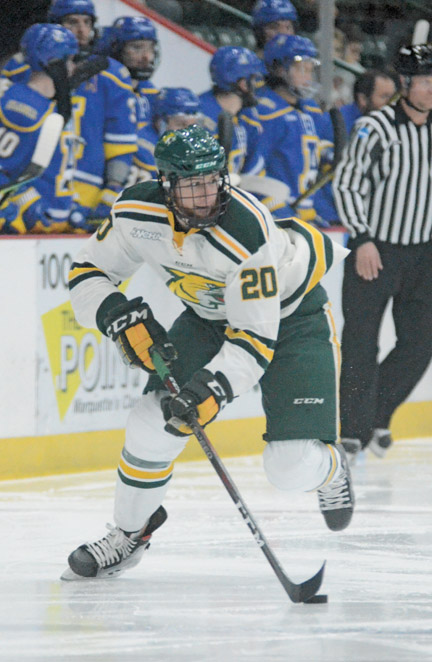 Northern Michigan University’s Garrett Klee looks to make a pass during a game against Alaska-Fairbanks on Nov. 16 at the Berry Events Center in Marquette. On Saturday, Klee netted a first-period shorthanded goal to start the Wildcats on their way to a 3-1 win at Alabama-Huntsville. (Journal photo by Amy Grigas)

HUNTSVILLE, Ala. — The last couple of weeks have been frustrating for the Northern Michigan University hockey team, with Friday’s loss to previously winless Alabama-Huntsville probably the low point in a four-game losing streak.

But on Saturday, NMU fought back against the Chargers, holding a 29-8 shots advantage after the first two periods, and eventually emerged with a 3-1 win.

Wildcats goaltender Nolan Kent got the victory in net after having to make just 16 saves.

Griffin Loughran almost scored four minutes in, but Huntsville (1-12-1, 1-8-1) goalie Mark Sinclair made a kick save to keep the puck out.

A minute later with NMU on the penalty kill, Garrett Klee collected the puck at the Wildcats’ blue line, skated up center ice and stayed just in front of a Huntsville defenseman. He then snapped a shot past Sinclair’s blocker for a shorthanded goal that put Northern up 1-0.

Shortly after the NMU penalty expired, the Wildcats almost scored again, but Sinclair just got his skate on Joe Nardi’s wraparound attempt.

With eight minutes left in the opening period, NMU put even more pressure on the Chargers. During an NMU power play, Sinclair was forced to make a kick save on a Phil Beaulieu shot and another save on Darien Craighead after the forward got a cross-ice pass.

Shortly after that penalty expired, UAH was sent back to the box and Sinclair had to come up big again. He made a kick save on a shot from Vincent de Mey in the slot and then stopped a one-timer from Nardi to keep the Chargers’ deficit at one going into the second period.

Northern kept its momentum going to start the next period. In the first minute, Loughran picked off a Chargers pass and fed the puck to Ty Readman, but Sinclair stopped two shots by Readman.

After Kent made a save on the Chargers’ Bailey Newton with 14:20 left and another on Daneel Lategan with 12:49 remaining, Huntsville got on the board just a few seconds later as Brandon Salerno one-timed a shot past Kent.

The Wildcats broke the 1-1 tie quickly, though. Less than a minute after the Huntsville score, Northern forward Jarrett Lee’s shot went off Sinclair and then off the crossbar. With the puck on the doorstep, Luke Voltin tapped in the rebound and Northern led 2-1.

Just like the first period, NMU had some great chances to pad its lead, but were denied by Sinclair. The Alabama goalie stopped Loughran with a sprawling save on an NMU power play midway through the second, and with less than five minutes left and UAH again on the kill, Sinclair blocked a one-timer from de Mey and a rebound attempt by Readman.

With nine seconds left in the period, Nardi had a beautiful scoring chance, but his shorthanded shot from the slot was gloved by Sinclair and the game remained 2-1 going to the third.

Huntsville came out with a little more energy in the final period and forced Kent to make a save on a backdoor shot by Connor Wood in the first minute.

With 15:52 remaining, Lategan got off a shot on an offensive rush and forced Kent to make a tough save to preserve NMU’s slim lead. Shortly after calling a timeout with nine minutes left, the Chargers almost cashed in as Austin Beaulieu almost tapped a shot past Kent during a scrum in front.

Huntsville’s last true scoring chance came on a power play with 1:36 remaining as Christian Rajic wristed a shot on net by the near post, but Kent made the save. With 15 seconds left, de Mey scored an empty-netter to wrap up the victory.

The Wildcats have just one series this month, but it’s at home at the Berry Events Center against defending WCHA regular-season champion Minnesota State-Mankato on Friday and Saturday, Dec. 13-14.