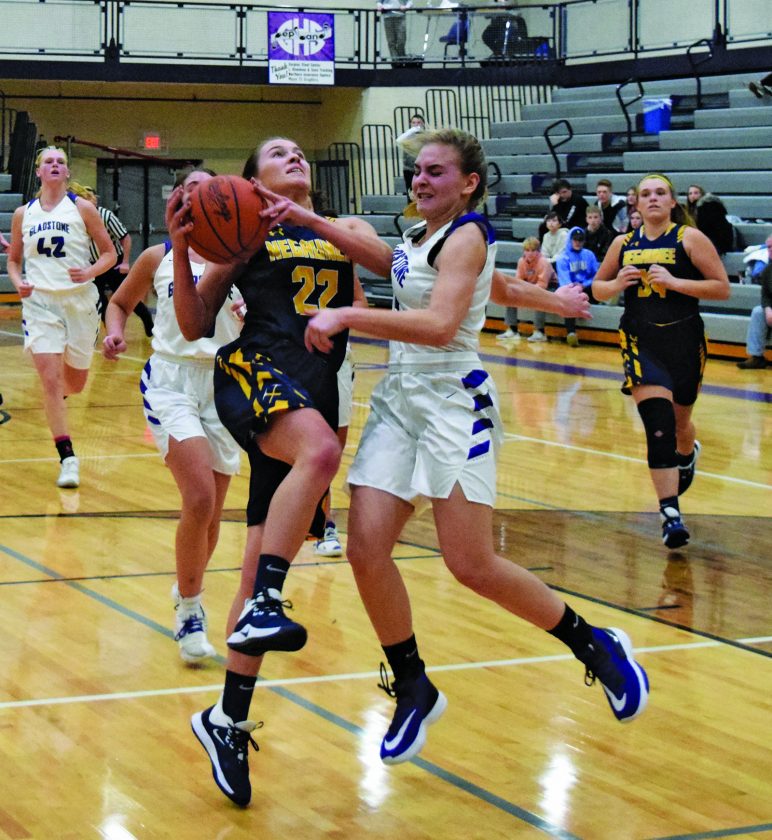 GLADSTONE — It came down to the final minute as the Negaunee girls’ basketball team held on with an iron grip to get its second win in as many games against the Gladstone Braves here Friday. The Miners held off the Braves 54-48 in Mid-Peninsula Conference action.

With 1:48 left in the game, Gladstone’s Megan Crow scored from under the basket to tie it at 48. Twenty seconds later, a Gladstone loose ball foul gave the Miners’ Larissa Anderson a chance at the free throw line. Anderson sunk both to pull the Miners ahead 50-48.

“It was a testament to our girls’ composure and staying with the game plan,” Miners’ coach Mike O’Donnell said. “They executed a couple beautiful plays down the stretch.”

After the Braves failed to score on their next possession, Negaunee attempted to wait out the clock. With 27 seconds left, Chloe Norman sunk two more free throws to put the Miners up by four. The Braves called timeout to regroup, but they came up empty once more as Negaunee sealed the win.

In the second, the Miners pulled ahead on the back of three triples from Lilly Nelson.

“They were really packing it in on defense,” O’Donnell said. “We brought in Lilly Nelson from the bench, and she drained a couple threes to really stretch that defense. That was big. That kind of opened things up inside for us.”

The Braves limited the damage with a strong free throw game, making 4 of 6 in the second to finish 8 for 10 in the first half.

“We have experience,” Braves’ coach Andy Cretens said. “The girls want those big moments. When they’re at the free throw line, they want to knock those down.”

The Miners outscored the Braves 9-4 in the first two minutes of the third, but the Braves found their footing on defense. A basket from Marnnea LaFave started a 10-0 run for Gladstone. Twenty-five seconds later, Gladstone’s Alaina Trudeau stole it and scored on a breakaway. A minute later, Lilly Griebel did the same, and a Crow block gave Andie Balenger another breakaway opportunity. Maddie Ahlgren then snatched another ball and scored to move Gladstone within one, 35-34, with 3:11 left.

“We didn’t change a whole lot (in the second half),” Cretens said. “We’re going to do what we do. A lot of stuff that we do, we just need to get our feet under us. We just had to get those first game jitters out of the way. That’s all it really was. We just kind of talked about minor detail type stuff and some little things we wanted to fix up.”

The Braves trailed 39-36 entering the fourth.

“I’m super proud of the way our girls battled back, because we could have just as easily given up,” Cretens said. “We did an awesome job, and we’re excited. That was a tough team right there. Every year we know we’re going to get a tough game against those guys.”

O’Donnell felt the win was a real boost.

“I’m just happy with this team finding their identity,” he said. “Everyone who went out on the floor for us tonight did great. I’m happy that they got a good road win, a signature win, so that we know we can do it.”

Crow led the Braves with 20 points and eight rebounds. Balenger and Ahlgren followed with 11 points apiece.