Get burned by No. 1: Minnesota State-Mankato scores twice on major penalty en route to 5-2 win over Northern Michigan University 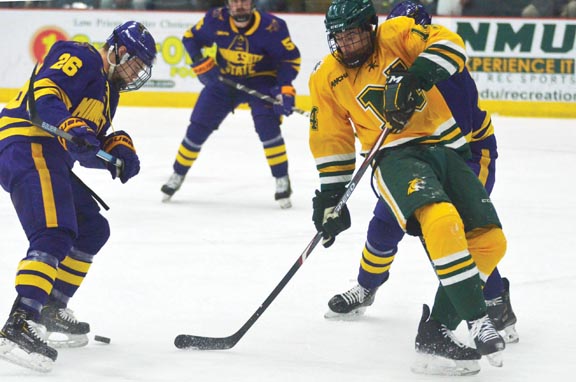 MARQUETTE — Friday night’s game was a frustrating one for the Northern Michigan University hockey team at the Berry Events Center.

The Wildcats knew they had to play at their best if they wanted a chance to slow down No. 1-ranked Minnesota State and there were times that they showed glimpses of that. However, NMU couldn’t overcome bad penalties and shaky goaltending and were dealt a 5-2 defeat.

“We talked all week about the reasons there’s nothing fancy about them. They play, from their best player to their extra skater to the guys who aren’t even playing, they all play the exact same way. They have great faceoff intensity, they win races, they block shots.

“It’s hard to fall behind every game. I thought we gave ourselves a chance for sure through easily the first 35 minutes of the game, but we got into a little lull in the second period. Then I thought the third period was just ho-hum both ways. So even if you play your best game, you might not win. There’s a reason they’re 15-1-1.”

The first period started off decent for the Wildcats (8-7-2, 6-5 WCHA) as they did a good job shutting down any good passing lanes for the potent Mankato (15-1-1, 10-1) offense. NMU also killed off an interference penalty on Hank Sorensen and kept the Mavericks from generating any good scoring chances. However, the Wildcats couldn’t hold them at bay for long as Sorensen committed a costly five-minute major boarding penalty and MSU made Northern pay.

The Mavericks hit two pipes in the first half of the period, but found the back of the net on their first chance of the long power play as Marc Michaelis beat Wildcats goalie Nolan Kent five-hole in the slot to put Mankato up 1-0.

Kent made a nice save on Dallas Gerads by the near post with 6:31 left, and later denied another MSU shot. However, the rebound went to a waiting Reggie Lutz, who lifted the puck over Kent’s shoulder.

Kent was then pulled for backup goalie John Hawthorne and he was later pulled for John Roberts in the third period. That was Roberts’ first appearance in net this season.

“It’s just a fact. It’s not an opinion, it’s a fact. At some point, somebody earns an opportunity, so we gave him (Roberts) a chance. We’ve got to try to find some stability in the net. It’s been an ongoing issue and we’ve got to figure that out.”

While the Mavericks were connecting on their opportunities, the Wildcats were stifled early offensively with their only real chance coming on a power play late in the first.

Things started to go better for NMU in the second period. Toward the end of a penalty kill, Vincent de Mey sent a shorthanded shot up from the blue line that almost sailed into the net past Mankato goalie Dryden McKay. Seconds later and after the penalty expired, a miscommunication behind the Mavericks net led to a Wildcats goal.

McKay went to collect the puck, but he ended up passing it to Northern forward Ty Readman, who tapped it into the open net before McKay could get back for the save. About a minute after the Readman goal, the Wildcats started to swarm around the Mankato net, getting off two quick shots and then de Mey almost beat McKay under the crossbar.

Late in the period, though, the momentum shifted away. With 3:49 left, Mankato winger Julian Napravnik backhanded a shot top shelf to get the lead back to two. With 1:36 left, a shot from the point somehow trickled its way through traffic and rolled past a sprawling Hawthorne to give the Mavericks a 4-1 advantage headed to the third.

The third period was a fairly quiet one until a little over eight minutes remained. With NMU forward Griffin Loughran in the box for slashing, Michaelis notched his second goal of the night as he went high on Hawthorne. With the Wildcats now trailing by four, Hawthorne was pulled for Roberts and he finished out the game in net.

NMU did get some offense going in the final couple of minutes. After McKay was called for interference, Phil Beaulieu had a shot almost go in, but it rang off the pipe. Seconds after the penalty expired, the Wildcats cashed in as Andre Ghantous fired a shot past McKay’s glove at 18:10.