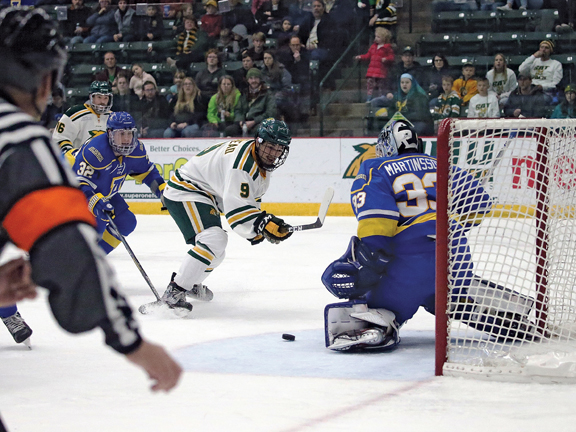 “I thought we started flat and it’s been a little bit of an issue with us lately.” — Bryon Pool, NMU assistant hockey coach, on a slow start to the Alabama-Huntsville series last weekend

MARQUETTE — Heading into the Thanksgiving break, the Northern Michigan University hockey team was on a bit of a slide as it lost three straight games, including a home-and-home sweep by Upper Peninsula rival Michigan Tech.

The Wildcats (8-6-2, 6-4 WCHA) may have been thankful going into last weekend’s series with Alabama-Huntsville as the Chargers were winless and struggling in all areas of the rink, so it looked like a great opportunity for NMU to get a sweep and get back on track.

However, that’s only how things looked on paper. What happened on the ice was a different story as the Chargers (1-12-1, 1-8-1) sprang out of the gate Friday, jumping out to a 3-0 lead and holding on to nab their first victory.

The Wildcats rebounded the following night, though, outshooting Huntsville 29-8 through two periods to earn a 3-1 win and end the four-game skid.

That doesn’t mean Northern was in a fantastic mood coming home, as a common issue this season popped up again Friday — a poor start to the game.

“It’s obviously a disappointing weekend when you go into a situation where you feel like you should come away with at least the opportunity to win a couple games,” Wildcats assistant coach Byron Pool said Tuesday. “Games like this throughout the season, you hope that it’s not one that’s going to hurt you in the end.

“I just felt that on Friday night we weren’t quite ready to play. We talk a lot about whether the team is ranked No. 1 or No. 60, everyone is a Division I athlete and everyone is competitive. They’d been playing some good hockey and they were excited to get home.

“I thought we started flat and it’s been a little bit of an issue with us lately … just not being ready to play at the drop of the puck. We found ourselves behind and just weren’t able to get back.

“On Saturday, I thought the guys responded really well. It probably didn’t show up on the scoresheet, and it wasn’t indicative of how well we played. Obviously, it was a very tight hockey game and we had multiple chances. I was really happy with the effort and the way the guys played on Saturday.”

When it comes to those bad starts, Pool couldn’t quite put his finger on the problem but did say that Wildcats coaches tried some different things before Saturday’s game.

“At the end of the day, I do think it comes down to the responsibility of the athlete, whether it be in a group or the individual, to make sure that when that puck does drop, that you’re ready to go.

“I thought Saturday night was maybe one of the best starts we’ve had all season. We were ready from opening puck drop, the guys were competitive, they were dialed in.”

A bit of a surprise was John Roberts, who is normally NMU’s third goaltender, suited up as backup to starter Nolan Kent for Saturday’s game instead of John Hawthorne, who had started Friday night’s game before getting pulled for Kent.

But Pool quashed the idea that there was a hidden reason behind putting Roberts in the backup role.

“It was just more of a situation to reward John Roberts,” Pool said. “John has been an outstanding teammate and he was recruited to be that third goaltender with the opportunity to earn some playing time…. So we just thought that it was an opportunity, that we’d be going with Nolan with the start, and we’d reward John and dress him as the backup on Saturday.”

Backup is definitely something that the Wildcats could use right now as they’re battling injuries, especially with their forwards. On Saturday, NMU moved several defensemen to play up front.

“We’re banged up as everybody is this time of year,” Pool said. “Andre (Ghantous) didn’t make the trip because of injury. Caleb (Schroer) got hurt on Friday night, so we’re down to 10 healthy forwards.

“We had a couple guys, we actually had two defensemen play up front, Michael (Van Unen) and Mason (Palmer). We hope to have Andre back for the (Minnesota State-)Mankato series, but we’re not sure what Caleb’s status is.

“After Christmas, we have the two transfers that are going to be eligible to play and that’ll give us a little bit more depth.”

The Wildcats are off this weekend before No. 1 Mankato comes to town to close out the first half of the season. Pool thinks the off weekend is much needed.

“It’s coming at a good time, obviously with the injuries and we have some other guys who are nicked up a little bit,” he said.

“Maybe rest isn’t the right word, maybe refresh. We’ve been going at it since September, so it’s been three hard months.

“The trip coming back (from Huntsville) wasn’t easy with all the snow. It was tough getting out and tough getting back. So it’s coming at a really good time where we can kind of regroup and refocus, and hopefully end the first half off on a really good note.”