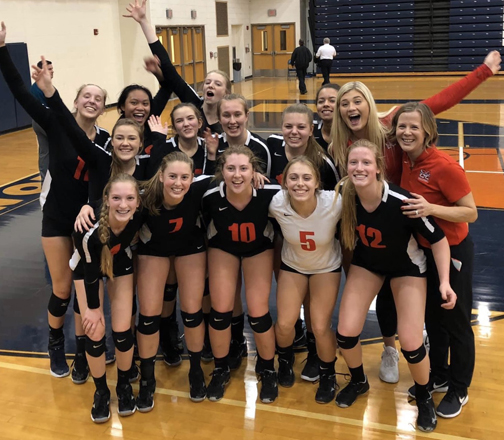 Marquette is all smiles after it won an MHSAA Division 1 district tournament match against Petoskey at the Northmen gym on Nov. 6. (Photo courtesy Ann Crandell-Williams)

Crandell-Williams also provided end-of-the-season statistics for her Marquette team that finished with a record of 40-5-3.

Hruska collected 552 kills, nearly half the Redettes’ total of 1,148. She had the team’s highest attack percentage at .367, with Michelin close behind with .363 and Millado at .338. The latter two were also the other two MSHS players with more than 100 kills.

Hruska also led the Redettes with 98 service aces and 300 digs, while Millado had a team-high 104 blocks and was second with 292 digs. King had 930 set assists.