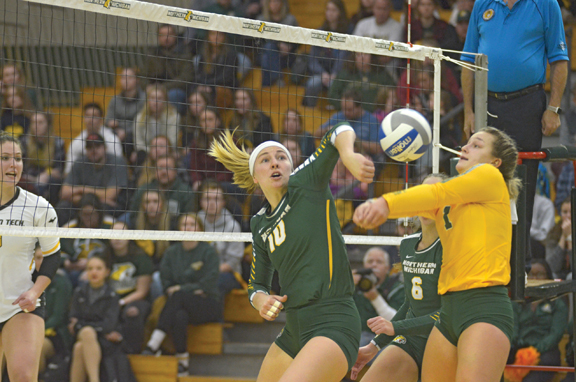 Northern Michigan University’s Sarah Kuehn, left, and Alli Yacko each go for the volleyball during a GLIAC match against Michigan Tech on Nov. 2 at Vandament Arena in Marquette. (Journal file photo by Trinity Carey)

Up next: GLIAC Tournament quarterfinals: No. 6 seed NMU at No. 3 Ashland, 7 p.m. Wednesday

MARQUETTE — The Northern Michigan University volleyball team has probably already hit the road for a long road trip to Ashland, Ohio, to face the Eagles in the first-round quarterfinals of the GLIAC Tournament.

The Wildcats tangle with Ashland at 7 p.m. Wednesday, with the winner to advance to semifinals and finals to be held this weekend, expected to be hosted by the highest remaining seed after the opening round.

NMU finished the season at 12-15 overall and 8-8 in the GLIAC and almost would’ve made a trip in the opposite direction to Michigan Tech if one of two tiebreakers had gone differently.

The Wildcats earned the match at Ashland as Northern finished sixth in the seeding for the tourney and Ashland third.

NMU tied Grand Valley for sixth at 8-8, but a five-set victory in their only meeting this season on Sept. 20 gave the Wildcats the tiebreaker and left GVSU seventh.

Similarly, Tech tied for second with Ashland, each with 13-3 GLIAC records, and the Huskies prevailed in that tiebreaker.

So MTU will host GVSU, also on Wednesday as a No. 2 vs. No. 7 matchup. If the Wildcats would’ve lost their tiebreaker, they would’ve been seventh and taken the Lakers’ place in Houghton, or if the Tech would’ve lost its tiebreaker that would’ve also sent Northern to Houghton as a No. 3 vs. No. 6 matchup.

If both can win Wednesday, they could meet in the semis on Saturday or finals on Sunday.

Michigan Tech has a possibility of hosting those final two rounds if the Huskies win and league champion Ferris State is upset by No. 8 Wisconsin-Parkside.

The Rangers won a tiebreaker over Davenport for the final spot in the tourney, with Northwood a game behind them.

The other quarterfinal match pits No. 5 Wayne State at No. 4 Saginaw Valley State.

NMU has several players among the top five in league statistics in overall matches.

Sophomore outside hitter Lizzy Stark is fourth in both kills and kills per set with 369 and 3.58, respectively.

In addition, freshman Lauren Van Remortel is fifth in the league with 993 assists and tied for sixth in assists per set with 9.74.