Veteran Ishpeming girls basketball team looks to get even better 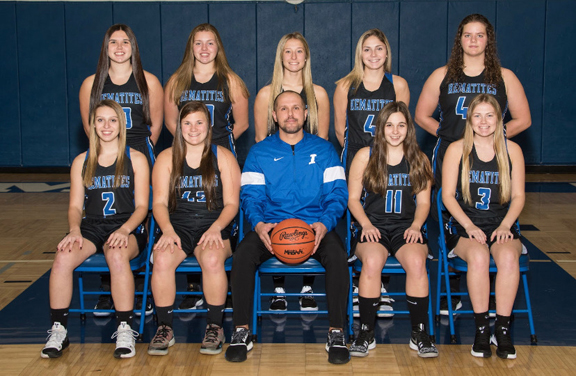 ISHPEMING — Heading into last season, the Ishpeming girls basketball team was in a tough spot as it lost key players to graduation with Madigan Johns going to suit up for Northern Michigan University and Katie Loman and Mariah Austin gone to Finlandia.

Despite those losses, the Hematites still earned a district tournament win and almost made the district final, but lost in a heartbreaker to Gwinn in the semifinals.

Ishpeming head coach Ryan Reichel said that last season was a beneficial one as it gave some girls experience on the court.

“We had a lot of personal growth individually with our players,” he said. “Losing kind of the focal point of our offense, Rebekah Loman going out with an ACL, other girls had to step up. So it built some confidence going into this season.

“Then losing two of our starters from last year, one of them an All-(Upper Peninsula) player in Madison Pruett, kind of changes some things, but we have other girls who have gotten some experience and stepped up.

“Hopefully we can build off last year, because at the end of it we were playing some really good basketball.”

When it comes to this year, Reichel sees his leaders as a “team by committee,” meaning there are several girls who could be step up in the leadership role. Ishpeming also may have an advantage over other schools in that its varsity team is made up of upperclassmen and it won’t have to bring up any sophomores or freshmen.

“Right now, I feel like we can play eight or nine girls every night,” Reichel said. “Emma Poirier was second team all-conference. We’re looking at her to be a big leader for what we want to do.

“She really blossomed in the second half of the season for us last year. She was up as a sophomore. So she’s really a seasoned vet when it comes to varsity basketball.

“Jocelynn Nyman also had a really good offseason and she worked on her game and you can obviously tell in practice. Her shooting has gotten more consistent. Then Rebekah being a good, strong post player. We haven’t had a girl that we’d try to put on the block for many years and this will be the first year we try to do something like that by getting her some touches inside.

“We can have them grow at the JV level and become star players, so when they get to varsity, they can step into the shoes of the people who have just left the program.”

Reichel said in practice his team has been trying to become more consistent shooters, so by the end of the season, they are peaking.

“Last year, we were winning games that we should’ve and we pushed Gwinn to the brink, which was a very good team that played Westwood in the district final very well,” he said. “We’re hoping to do the same thing this year, to get really good offensively by the end of the season.

“I treat it (the regular season) as a 20-game preseason, what I call it, where we can work on things and try to get better at things. I think everyone is going to be playing to try to beat Westwood this year.

“They’re returning everybody and they have a lot of pressure to try to repeat. We all have to try to get better to compete against the Gwinns, Negaunees and Westwoods this season.

It’s still early, but Reichel likes what he’s seeing in practice, a mix of competitiveness and cooperation.

“I think this year we have a lot of buy-in,” he said. “Our practices are really intense so far. They come ready to learn. They laugh a lot. They play well together. We get up and down the floor and they’re cheering each other on.

“Team chemistry at this point is really ahead of where most teams are because these girls have been around the whole offseason, this whole past summer, their friend groups are kind of similar.

“So we like … the way our team is. We’re trusting each other right away and that doesn’t leave much doubt when people try to make plays or make an extra pass. That’s fun on the sidelines watching them grow like that and show how much they trust each other.”