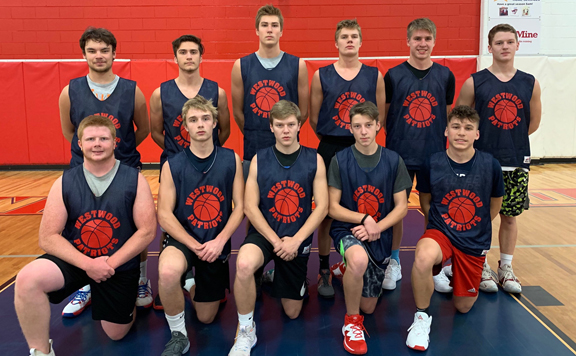 ISHPEMING — Scott Syrjala will try to bring a new look to Westwood boys basketball this season as he takes the reins of the Patriots varsity squad.

Westwood, coming off of a 12-10 season and a loss to Negaunee in the MHSAA Division 3 district tournament semifinals, certainly has some question marks early on.

Syrjala takes over for Chad Hewitt, who held a successful five-year run at the helm, leading the Patriots to two district titles and a regional title under his watch.

Much like Hewitt when he took over ahead of the 2014-15 season, Syrjala has coached the Patriots junior varsity team since 2015, the same year he took the head coaching position for Westwood’s varsity football team.

Fresh off of a football season that ended sooner than they hoped, Syrjala said the short transition between seasons has carried over fairly well for both him and his athletes, despite having some early rust on the hardwood.

“The better question is that I want to make sure the kids are recovered from the football season more than I am,” he said. “We had a tough loss at the hands of Menominee and the kids took that pretty hard. I’ve been watching these kids over the last couple of weeks and it shows that they care. Most of our football players are also basketball players and vice versa.

“We started practice (last Monday) and we’re really rusty. We’re struggling to catch passes, make shots and make passes, but that’s difficult. We’ll get the rust shaken off. We’re sort of hitting the ground running, so to speak.

“It’s been a seamless transition for me and it’s sort of business as usual. That’s a credit to what Coach Hewitt has done here the last several years. I was the coach of the JV team, so these kids have played for me before and they know what to expect from me.”

Taylor Dellangelo, Ty Alderton and Erik Anderson will be three key seniors returning. They replace the likes of players like Blake Hewitt, Nathan Beckman and Zachary Niemi, a trio who received All-Upper Peninsula honors from the U.P. Sportswriters and Sportscasters Association last season.

Alderton was recognized in the All-U.P. honorable mention category, with Syrjala looking to him and Dellangelo to lead the senior group while Anderson can be used as a utility guy.

“Taylor and Ty are going to lead us with their senior roles,” he said. “Erik Anderson is also a very strong, athletic kid. He’s kind of our garbage man. He does all the little things, creates picks, plays strong defense and boxes out well.”

Syrjala will have at least three sophomores up from the JV as well — Zachary Beckman, Zachary Carlson and Marcus Boase.

“Dellangelo and Zach Carlson can run the point for us in a two-guard system,” Syrjala said. “(Carlson) was a special player on the JV team last year. He averaged 24 points a game and there were nights where he would score 36-38 points, but the varsity level is a whole different ball game and he’s smart enough to know that.

“It’s going to be a little different and I’m going to have to be on them a little bit. We’ve got to put the basketball in the hoop and score points. With that comes technique and fundamentals. We’re trying to change a few kids’ shots up and remain fundamentally sound. We’re hoping it pays off.”

Syrjala will try to preach a defensive mindset to his players while also trying new things on offense.

“We’re going to coach our kids up and get them to play defense. We need to get the ball in the hoop on offense and go from there. I’ve always talked about having hard-nosed defense with this group, and we’ve got to get a lot better at that..

“With these kids and this group, and it goes back to football too, they overachieved in my opinion,” he said. “They’re great kids, wonderful kids, and out of all of our problems, effort is not one of them.”