Too big a hole 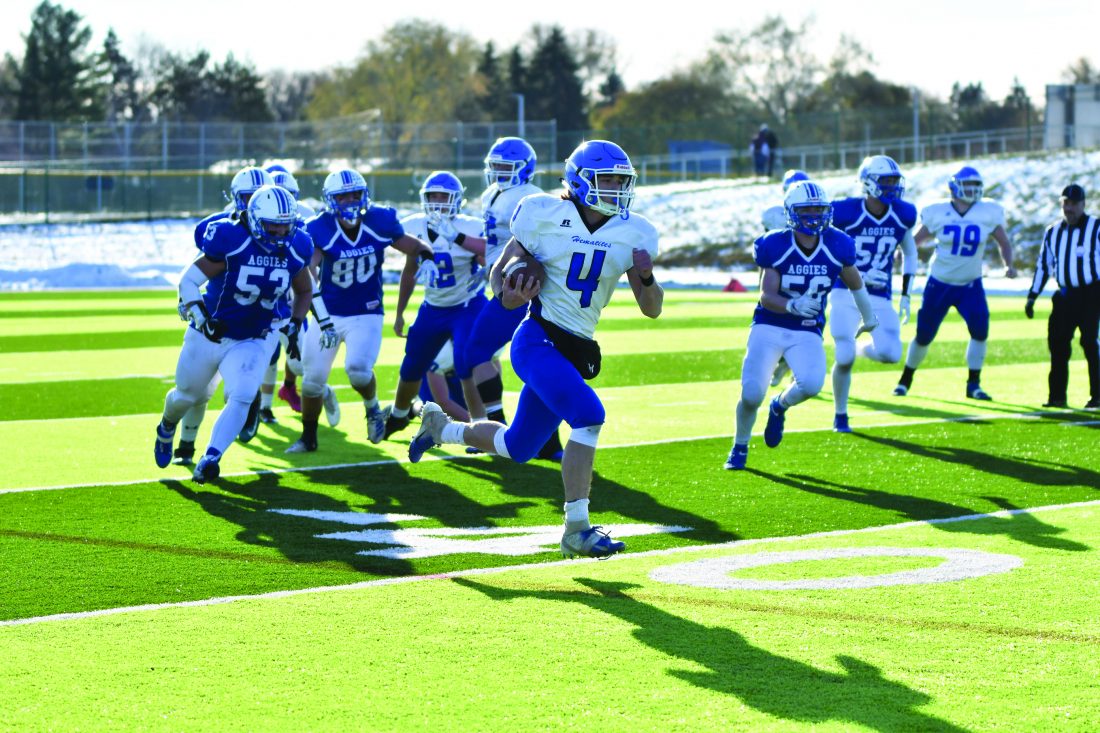 MOUNT PLEASANT — They tried their best, but a 27-0 deficit was too much for Ishpeming to overcome against Beal City on Saturday.

The Aggies held back the Hematites 27-14 in their MHSAA Division 8 regional championship football game at Mount Pleasant Memorial Community Field to end Ishpeming’s season at 9-3.

Beal City (11-1) advances to the semifinal round on Saturday afternoon back in Mount Pleasant against Ubly (10-2).

“It’s a good season for us,” Ishpeming coach George Niemi said. “Here we’re in the regional final and we were in it to the end.”

Three quarters had ended with Ishpeming (9-3) trailing by 27 points. But Ishpeming struck quickly with John Corkin scoring a 4-yard touchdown and then running for the two points with 11:01 left in the game.

Corkin later exploded for a 70-yard run to cut the gap to 27-14 with 7:31 to go. But the Aggies were able to hang onto the ball and had a key third-down conversion when Ben Matthews caught quarterback Jack Schafer’s desperation tipped pass for a first down.

It allowed the Aggies to cut more time off the clock. Ishpeming got the ball back at their own 32 with 3:04 to play and no timeouts left.

Ben Pruett had a 38-yard run on fourth down to the Beal City 25 with 1:10 to play to keep things going. But Logan Chilman intercepted a pass in the end zone to end the threat with 12.8 seconds to play.

“I saw the ball go up in the air and went and got it,” Chilman said. “We’ll go back to square one at practice on Monday and keep it going.”

“They are a very strong team,” Niemi said. “I wish them the best.”

After a scoreless first period, Beal City put together an eight-minute drive in the second quarter, scoring with 5:37 to play on an 18-play, 64-yard drive with Ben Matthews scoring on a 1-yard plunge and Aiden Mindel booting the extra point.

Then two big plays stymied Ishpeming. Trey Small returned a punt 80 yards for the Aggies and a 14-0 lead with 3:19 to go before halftime. Logan Chilman intercepted a pass for the Aggies and moments later scored on the reverse play from 42 yards out.

“I thought we came out real fast,” Beal City coach Brad Gross said. “We got on top of them early and kind of broke their backs with big plays and then grinded it out to the end. We’re on a run and haven’t even played our best football yet, which is good.”

“I told the kids at halftime, we were getting out-physicaled,” Niemi said. “It was a good fourth quarter. Time was not on our side. (Beal City) made enough plays to keep the clock running.”

Corkin had 107 yards rushing, followed by Ben Pruett with 98 and Otto Swanson with 73.

“They had a game plan to be physical,” Niemi said. “Early on, they did what they wanted to do.”