Thankful for the trip: Northern Michigan University heads to winless Alabama-Huntsville after sweep by Michigan Tech 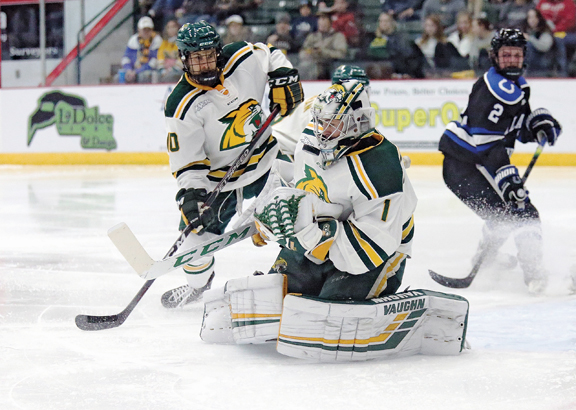 Northern Michigan University goalie Nolan Kent, center, catches a puck at chin level as teammate Ben Newhouse looks on in the second period of a WCHA hockey game played against Alabama-Huntsville on Nov. 2 at the Berry Events Center in Marquette. Looking on at right is the Chargers’ Drew Lennon. (Photo courtesy Daryl T. Jarvinen)

“They haven’t won a game yet and they’re at home and that’s a dangerous combination.” — Grant Potulny, NMU head hockey coach, on Alabama-Huntsville

MARQUETTE — Thanksgiving is Thursday, a time to be grateful for what you have and any good things that are in store for you.

On paper, the Northern Michigan University hockey team should be thankful for what’s coming this weekend.

Even though the Wildcats (7-5-2, 5-3 WCHA) are on a three-game losing streak, they’ll be facing off against a winless Alabama-Huntsville team and have a great chance to get back on track.

However, that’s the idea only on paper. The Chargers (0-11-1, 0-7-1) have been a thorn in NMU’s side for quite some time as they forced the Wildcats to rally Friday earlier this season to hold on late for one victory.

Huntsville also was tied with Northern 2-2 in the second period in their other game before the ‘Cats got their act together and completed the sweep.

“They’ve played us tough every time,” NMU head coach Grant Potulny said in a phone interview Tuesday. “They haven’t won a game yet and they’re at home and that’s a dangerous combination when you see a team that has caused you trouble for whatever reason.

“They’re going to be hungry to do whatever it takes to try to break through that barrier. As much as they probably feel that it’s a must-win, I don’t think there’s any more games we play this year that are must-wins than both of these.”

The Chargers not only want to break through the barrier in the win column, but several other barriers as well. Huntsville is tied for 58th in the country in total offense and dead last (60th) in total defense. It’s also in the bottom 10 on the power play and the penalty kill, which bodes well for a Wildcats team that is ninth overall with the man advantage and seventh in penalty minutes.

Another plus is that Northern shouldn’t be heading into the series discouraged. It played well against Michigan Tech both games last weekend and only Huskies goalie Matt Jurusik seemed to stand in the way of a Wildcats win on Saturday.

“I thought we played outstanding both games,” Potulny said. “(On) Saturday, for the last 30 minutes of the hockey game, we gave up five shots and one scoring chance; generated 22 scoring chances on the night with really one power play only and allowed eight (scoring opportunities).

“So the way that the numbers work, if you can play like that, you should win every single game that you play. Now the ‘X’ factor was obviously Jurusik and I thought he played incredible.

“We made a mental error Saturday that allowed them to kind of break free on a 2-on-1 and that’s just tough luck. This weekend, it’s a hard pill to swallow because almost every box that was checked that says you’re going to win, we checked it.”

If there’s a concern for Northern going into the weekend, it’s with goaltending. Both John Hawthorne and Nolan Kent have seen minutes in net and for the most part, have played well. However, neither has emerged as the No. 1 goalie and Potulny is hoping that is soon resolved.

“They’re disappointed and they know they can and have to be sharper,” he said. “It’s to the point now where I think both guys have had a chance and I think if one of them is playing better, they’re going to play.

“We need wins and it’s no different than any other position. You’ve got to play the guy who you think is the best and I’m really just going to evaluate practice this week and see who I think has a better week of practice. If the guy who plays on Friday wins the game and plays well, I would think I’m going to play him again.”

Overall, Potulny said his team is feeling confident as it heads south to spend its Thanksgiving weekend, hopefully feasting on a struggling Chargers defense.

“Last week, I’m pleased with how we played,” he said. “I thought we played well. We went back to work on the offensive part of the game again yesterday and today and tomorrow. You know as an athlete when you’re playing well and you know as an athlete when you’re not. When you are playing well, you have confidence, so I would have to believe our confidence is high.”

The puck drops both Friday and Saturday at 8:07 p.m.