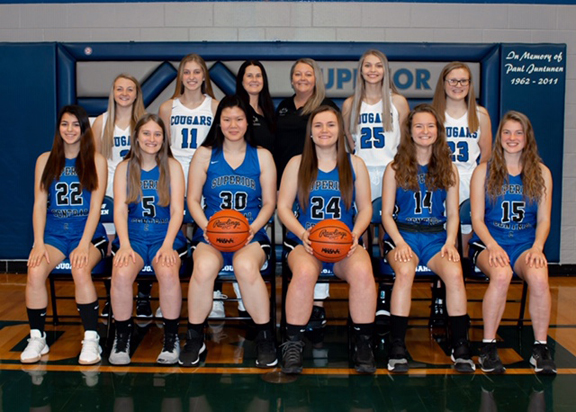 EBEN — After a winless campaign a year ago, Superior Central girls basketball coach Bobbi Ayotte knows the only way is up in her second year at the helm.

“Last year was a struggling year,” she said. “We didn’t win a game, but the girls really fought through the whole year…. They learned how to battle back.”

Most of the roster returns, and Ayotte believes team chemistry built last year will benefit them.

“This year, we’re six seniors strong with three sophomores and one junior,” she said. “We’ve just got to continue to build on that team unity. There’s things that they learned last year that they’re getting, which is good to see as a coach. Last year, I came in with a new program, and this year, it seems like they’re getting it.”

A returning senior is the anchor.

“Elizabeth Molag is one of our posts that’s going to be returning,” Ayotte said. “She’s going to be strong in the post for us, and she’s able to really get the ball in there, go to the basket and get rebounds.”

“Charlotte Charlebois will play point guard, and Riley Johnson will be our forward,” Ayotte said. “They’re just really versatile. They can pass and they can shoot. So, that will be really beneficial for us.

“Gloria Johnson is also returning. She’s going to be tough in there, battling and rebounding, and I think she’ll be a huge asset.”

Ayotte is excited about some players up from the JV.

“Madisyn Tyner (is) going to add a lot of quickness as one of our guards,” the coach said. “Emma Rutter joined the varsity team during districts … and she’ll also be helping out at our guard positions.

“Jessica Walters is going to be one of our shooting guards. We’re hoping to get her the ball to take some shots.”

The focus this season has been on quickness and defense.

“We’re really fighting to be a defensive team,” Ayotte said. “That’s what we’re really going to be focusing on this year.

“We’re going to be a quick team, so hopefully we can start getting pressure — ball pressure and full-court pressure.”

The Cougars will add to their quickness with Danika Walters from cross country.

“She’ll be quick and she’ll be working mostly on the outside,” Ayotte said.

Ayotte feels like the 2019-20 season can only get better.

“We have nothing to lose,” she said. “I think we have a spark. We have a great attitude going into the season, and I just want to continue that…. We’re going to go out there and work hard and be the best we can be.