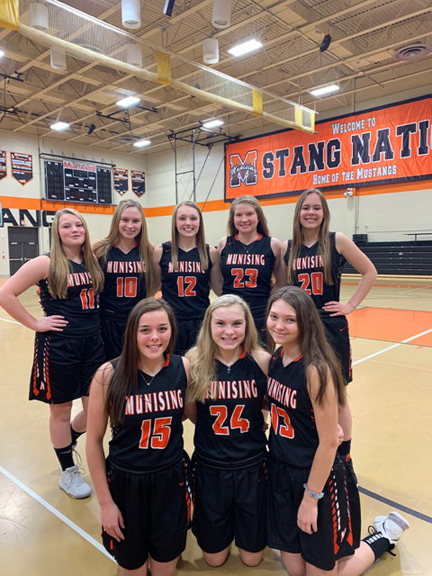 This year will be a little different, though, as Munising has just eight girls. Mustangs head coach Matt Mattson thinks he’s got good leaders and a solid supporting cast.

“Megan (Matson) and Crystal (Murdock) are back in the post,” he said. “Both got pretty good minutes last year. A sophomore who was up as a freshman, Jenna Matson, is also back. Those are our three key players.

“We only have eight total. So we have five seniors and three sophomores. There’s not a junior girl on the team. A little bit of a different mix for us, but hopefully, we can figure it out.

“There’s Audree Hines, a senior who will … play a ton of minutes. There’s Taylin (Behning), who is a senior and a very good defensive player. The sophomores we have up are Lori Mattson, Alivia Killips and Jenna, while Ashley Mannisto is the other senior.

“The five seniors should be good leaders for us. They know what to expect and they’ve done a nice job in practice.”

Despite lacking depth and size, Mattson thinks their play down low will be effective.

“I think our post play is pretty good,” he said. “We don’t have anybody who is 6-(foot-)1 or 6-2 or anything. We tend to turn out 5-8 and 5-9 players that end up doing a pretty good job in the post. It’s kind of proven in the past that those post players are pretty good.”

“We did have a scrimmage and it’s a little quick to get to a scrimmage when you miss a couple practices,” he said about recent snow days. “If you play defense and rebound, that’ll give you a chance in a lot of games. We’re trying to get our legs back in shape and get some jump shots to go in. We’re not going to over-talent people, but I think if you’ve seen our teams in the past, we normally play really hard and play pretty good defense. Hopefully, that will give us a chance most nights.”