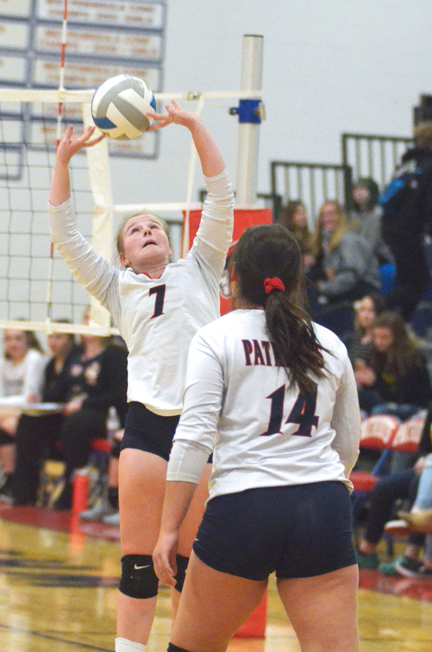 “We’ve just gotta keep believing in the process…. I’m super proud of what the girls did, they couldn’t have done any better.” — Milton Braga, head coach, Westwood volleyball

ISHPEMING — Volleyball is a game of rallies.

When Gwinn needed a rally during Monday night’s MHSAA Division 3 district tournament opener against Westwood, its players stepped up to the plate.

Up two sets to none in the match but down 18-12 in the third set, the Modeltowners clawed their way back in the final stretch to complete a three-set sweep of the Patriots at the WHS gym.

Set scores were 25-18, 25-15, 25-23, with Gwinn advancing to Wednesday’s district semifinal to host Bark River-Harris, who topped Norway in three sets in another district match Monday.

Gwinn head coach Toni Roberts said finishing matches off has been a bit of an Achilles heel for the Modeltowners all season, but she was glad they were still able to end this one in three sets, despite finding themselves in a hole late in the final set.

“It was a great win,” she said. “We love playing districts, so it was a great first win for us. We kind of struggled in the third, which has been our story all season. We put together two good sets and then fall apart for a minute, but they fought hard and were able to finish the game regardless and we can’t be mad about that.”

Roberts said focus has been the key for her team in the stretch run of the season, and it paid off in their first tournament match.

“We’ve been working a lot on focus,” she said. “They just focused and got the job done. They swung at the ball, played with confidence and I’m really proud with what they did.”

On the other side, the season came to an end sooner than Westwood liked, but head coach Milton Braga was all smiles as his young team played a hard-fought match with the future looking bright.

“I only had two seniors, and at times, I had three freshmen, two sophomores and one senior out on the court,” he said. “This (match), that’s one of the best … we played all season. Everybody contributed, it was a fun game to play and we played against a really strong team.

The teams battled to a 4-4 tie in Set 1 before Gwinn pulled ahead for good with four straight points, including a block from Megan Ruokolainen and a kill and consecutive aces from Emily Curtice.

The Modeltowners used that run to pull away, eventually going up 20-13 and winning the set on a block from Halle Beauchamp.

Gwinn quickly went up 9-0 in Set 2 before the Patriots got their first point on a service error by the Modeltowners’ Marissa Delmont. After falling behind 12-2, Westwood made things close with eight of the next nine points, pulling within 13-10.

Despite the Patriots’ rally, Roberts kept trust in her team and didn’t opt for a timeout, and the Modeltowners responded with five of the next six points to go up 18-11 and instead force Westwood to call timeout. The Patriots were unable to recover, and Jorge Hardy’s lone kill of the match happened to be a big one for Gwinn, as it ended Set 2.

The final set was the most exciting of the night for fans. The Patriots first gained a solid lead of 14-10 behind a service ace and kills from Ackland and Madison Marta.

After going down by six at 18-12, Gwinn shifted into gear, eventually tying it 21-21 on an ace from Tianna Taylor and taking the lead on a Westwood attack error.

The Patriots managed to tie it again thanks to a kill by Ackland, and took the lead at 23-22 on a Gwinn attack error.

The Modeltowners rallied for the final three points of the night, however, which came on a Patriots’ net violation, attack error and an ace from Beauchamp to clinch the match and send Gwinn to the semifinals.

First serve for Wednesday’s match in this nontraditional-format district between Gwinn and Bark River-Harris is set for 7 p.m. at Gwinn High School.