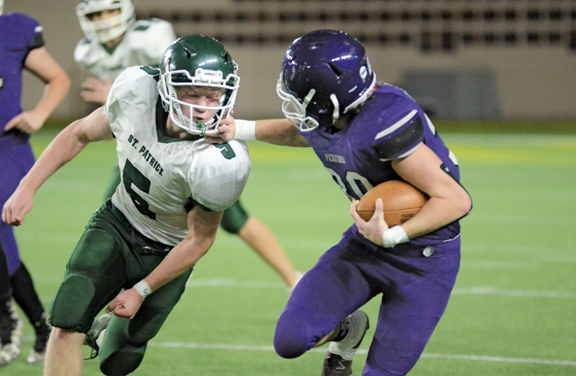 MARQUETTE — Last year Pickford was left heartbroken in the Superior Dome as it fell in the 8-player football Division 1 state finals game.

On Saturday, the Panthers exited in jubilation by finishing the job this time, blowing out Portland St. Patrick 48-15 in the Division 2 title tilt.

Pickford used its large offensive line and talented rushing game to take over the game in the second quarter. The Panthers never looked back as they outgained the Shamrocks 285-18 on the ground and 437-143 in total yards.

“Our staple for the whole year has been our offensive line and we knew if we stuck with it and do what we did best, we’d force them to do what they didn’t want to do,” Pickford head coach Josh Rader said.

“We came up short last year and after that game, you get that empty feeling in your stomach. A lot of them were juniors and we only had two seniors on the team last year. So they had a goal to get back here to be able to play in this game and win it.”

Quarterback Jimmy Storey agreed with his coach, saying a state title was on the team’s mind from the start of the season, but it took a lot of work.

“It’s all those extra reps,” he said. “Coming out the first day of practice, we set our goals and said we want a state championship this year. We’ve been working toward that in every practice, every game and every play.”

While Pickford looked sharp all game, the dome has been an unlucky place for the Shamrocks. Two years ago, PSP was run over by Forest Park.

“We had some trouble just slowing them down,” PSP head coach Patrick Russman said. “They are great up front and we knew that. We needed a couple big plays here or there to keep us going along with it.”

It was almost all Panthers starting in the second quarter with the score tied 8-8. Storey made two short TD runs and threw scoring passes of 25 and 55 yards to eventually make it 48-8.