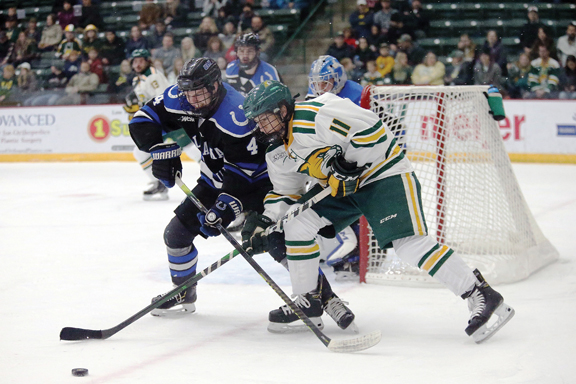 Northern Michigan University’s Vincent de Mey raises his left skate to cut sharply across the blue line as he looks to make a pass in the first period of a WCHA game played against Alabama-Huntsville on Nov. 2 at the Berry Events Center in Marquette. (Photo courtesy Daryl T. Jarvinen)

MARQUETTE — The No. 18 Northern Michigan University hockey team, with the eighth-best scoring offense in NCAA Division II, had two of its forwards recognized by the WCHA after a tie and loss to nonconference foe St. Cloud State at home over the weekend.

Sophomore Vincent de Mey was named the league’s Forward of the Week and freshman teammate Andre Ghantous earned the Rookie of the Week honor.

The Wildcats are 6-2-2 and earned 160 votes for its top-20 showing in the weekly U.S. College Hockey Online poll. St. Cloud is in effect 24th, receiving the fourth-most votes among those outside the top 20. 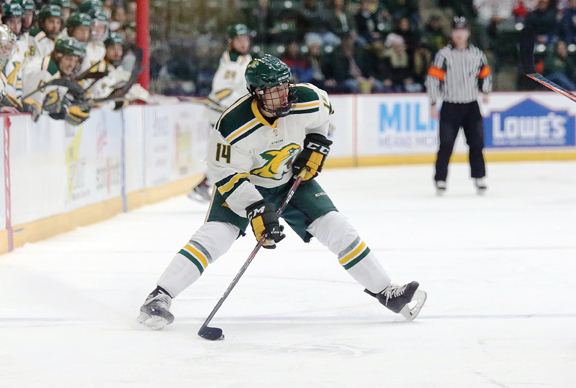 Northern Michigan University's Vincent de Mey raises his left skate to cut sharply across the blue line as he looks to make a pass in the first period of a WCHA game played against Alabama-Huntsville on Nov. 2 at the Berry Events Center in Marquette. (Photo courtesy Daryl T. Jarvinen)

The WCHA’s Minnesota State-Mankato (8-1-1) is No. 1, with fellow league member Bowling Green State (5-4-0) just ahead of NMU in 17th after receiving six more votes than Northern. In addition, Alaska-Fairbanks is eighth on the “others” list.

De Mey and Ghantous head up the Wildcats’ power play unit, combining for three goals on a five-minute 5-on-3 advantage that enabled NMU to come back from a 3-0 deficit on Friday night to forge at 3-3 overtime tie.

De Mey had a career-high three-point game with a goal and two assists, all in a span of 3:02, before adding an assist in Saturday’s 5-4 OT loss that included comebacks from 3-0 and 4-1 deficits.

Already a three-time WCHA weekly honoree this season, de Mey’s four-point weekend was a personal and league best, with the three assists and three power-play points also the same accomplishments. De Mey was named WCHA Player of the Month for October.

In addition, de Mey’s five power play goals rank him second in NCAA Division I while his eight total goals is 10th in the country in goals per game.

Ghantous, on the other hand, won his first league weekly honor with NMU’s second and third goals spaced just 1:26 apart in Friday’s comeback.

The career-high two-goal night was followed by his scoring Northern’s first goal Saturday to extend his point streak to six games and goal streak to four games. He’s sixth in the NCAA in power play goals with three to help the Wildcats’ power play be among the best in the country at 27.1 percent.

Among freshmen, Ghantous is 16th in points per game with 0.90 per contest. He led the WCHA last weekend in power play goals with two and tied for the top with three overall goals. Also scoring on half his shots, he claimed the top percentage — 50 percent — with three goals in six shots, while his three goals for the series was third in the nation.

The Wildcats complete a six-game string of home games with a series at the Berry Events Center against Alaska-Fairbanks at 7 p.m. Friday and 6 p.m. Saturday. The teams are tied for second in the WCHA with 12 points, NMU sporting a 4-0 record and UAF 4-2 along with 6-6 overall. Minnesota State tops the league with 15 points and a 5-1 league record.

The following weekend, NMU plays a home-and-home series with Michigan Tech, the 7 p.m. Friday game in Houghton and 6 p.m. Saturday game in Marquette.