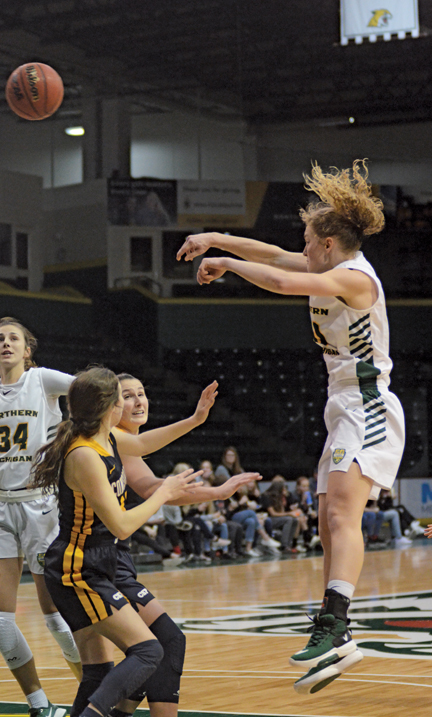 MARQUETTE — Like some Northern Michigan University basketball fans, the Wildcats women’s and men’s programs will be spending their Thanksgiving weekends on the road.

Both will play quite a distance away from Marquette as the women head south to Springfield, Missouri, for the Drury University Thanksgiving Tournament, while the men head way north to Anchorage, Alaska, for the Seawolf Thanksgiving Classic.

The NMU women (3-3) are coming off a solid weekend at home where they beat St. Cloud State right before the buzzer, then came from behind to top Concordia St. Paul.

In the game against St. Cloud, Wildcats point guard Amber Huebner dribbled down the clock until she found an opening in the lane. As the Marquette Redettes alum drove to the basket, she dished the ball to Erin Honkala, who put in the layup with just one second remaining.

In the next game, Northern trailed the Golden Bears after the first quarter and at halftime, but used a strong third quarter, outscoring CSP 20-10 and getting 15 points off the bench from Elena Alaix for the win.

Now the Wildcats return to Springfield where they upset GLIAC foe Ashland in the first round of the NCAA Division II Tournament. They’ll open with Truman State (3-1) today, a team with three double-digit points-per-game scorers, led by Katey Klucking’s 15.

NMU will then tangle with No. 1-ranked Drury (4-0) Saturday, the team that eliminated Northern from the NCAA Midwest Regional semifinals. The Panthers also boast three double-digit scorers with Paige Robinson on top at 15.3 ppg. It’s going to be a tough weekend for the Wildcats, but with the exception of one game, they’ve been strong defensively — second in the GLIAC in points per game — which will be key in stopping each opponent.

Meanwhile, the men are voyaging to a place that the hockey team is familiar with, but other programs probably aren’t in Anchorage, Alaska.

The Wildcat men (2-2) were off last week, which might be a good thing as they’ll be dealing with a huge time change and some late tipoffs. Northern opens with Alaska-Fairbanks (1-5) tonight, a team that is off to an awful start with the Nanooks’ only win coming in a two-point victory over Hawaii Pacific.

The Wildcats then take on Alaska-Anchorage (5-1) Saturday night and the Seawolves have been strong from the beginning with the only loss coming to Chaminade, so they’ll be a good test for NMU as it comes off its extended break.