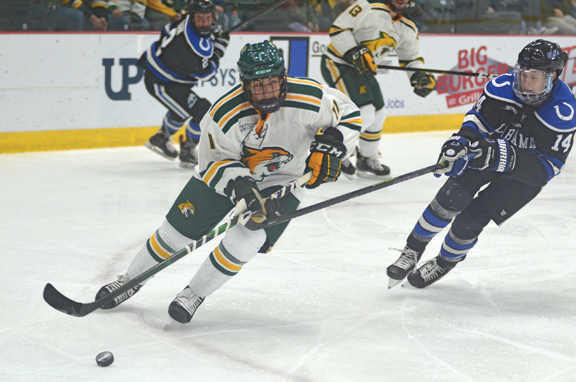 Northern Michigan University’s Andre Ghantous, left, tries to keep the puck away from Alabama-Huntsville’s Daneel Lategan during their WCHA game on Friday night at the Berry Events Center in Marquette. (Journal photo by Trinity Carey)

MARQUETTE — Several days ago, Northern Michigan University head hockey coach Grant Potulny talked about how his team has shown resiliency early this season as the Wildcats have bounced back from slow starts.

They needed to be resilient again Friday night as Alabama-Huntsville scored just 16 seconds into the game and held a 2-1 lead heading into the second period. However, NMU came back with three second-period goals and held on in the third to earn a 5-3 win over the winless Chargers (0-7, 0-3 WCHA).

After the game, Potulny was happy that his team found a way to win again, but is frustrated by its lack of consistency.

“I’m proud of us winning the game, and at the end of the year, they all count,” he said. “No matter how you get them done, they all count the same. The word that we use is methodical and we have not been methodical about our business the last three games.

“I feel that we’ve been erratic. We’re giving up way too many opportunities, too many shots. We’re winning, we’re getting by, but you can’t continue to give up 30 (shots) and expect to win. 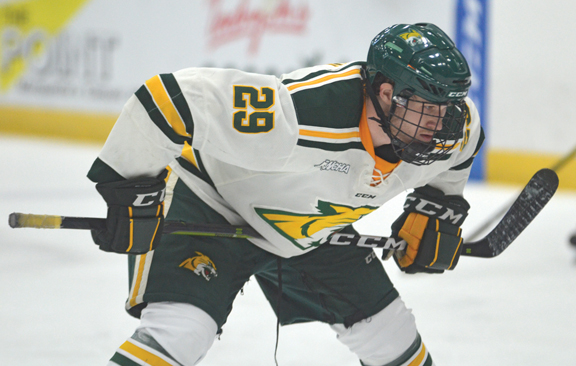 Northern Michigan University's Grant Loven awaits a faceoff during the Wildcats' game against Alabama-Huntsville played at the Berry Events Center in Marquette on Friday, Nov. 1, 2019. (Journal photo by Trinity Carey)

“We’ve got to have a game where we give up two or less (goals). It’s been five games since that happened and we’ve only done it once. That’s the part that’s concerning for me.”

Down by one start the second, NMU (5-1-1, 3-0) caught fire early. Just 57 seconds into the period, Phil Beaulieu sent a shot on net from the blue line and Griffin Loughran deflected the shot through Chargers goalie Marc Sinclair’s five-hole. A little more than a minute later, Andre Ghantous gave Northern the lead as he beat Sinclair to the far post.

Loughran, who tallied his first career hat trick last week and was named WCHA Forward of the Week, is off to a blazing start to his sophomore year.

“I’ve been just keeping my feet moving and kind of going off with Nards (Joe Nardi) and Craigy (Darien Craighead). Just moving and trying to find some lanes. I’m just sticking to playing hockey this year instead of running around (like) last year. Just playing the game and playing within our structure Grant has for us. It’s been working out so far for us.”

Beaulieu said that the Wildcats are approaching things in a different way this year when it comes to overcoming mistakes and falling behind.

“Just with last year, it was kind of a negative year, I’d say, and that’s how it goes sometimes,” he said. “I know my thought process coming in and our whole group has bought into this is don’t get down. What’s the point? You’re not going to get back just complaining about it.

“We’re really good about parking it, as we call it, and leaving it in the past. Just control what you can control and you’re only as good as your next shift. I think that’s our big team motto.”

With the Wildcats up 3-2, the teams went through an interesting stretch of penalties as UAH’s Austin Beaulieu was given an unsportsmanlike conduct penalty’ and three seconds later, Northern’s Vincent de Mey was called for interference. A short while after that, Loughran got whistled for tripping, but neither team scored over that stretch.

NMU almost padded its lead to two goals as Ty Readman and de Mey just missed on shorthanded attempts with around eight minutes left in the middle period. The Wildcats did get that fourth goal eventually as Craighead sent a shot on net that rang off the far post and in.

After Huntsville’s Dayne Finnson was tossed for a five-minute checking from behind penalty along with a game misconduct, Northern opened the third period with a five-minute power play and an opportunity to put the game away. However, Adam Roeder’s good look was denied by Sinclair and Mitch Slattery’s backhand attempt seconds later rolled wide of the net. Wildcats extra forward Michael Van Unen was then called for kneeing and that killed the long power play chance for NMU.

Not long after the Chargers managed to kill off the major penalty, they pulled within one of Northern as Daneel Lategan beat John

Northern Michigan University’s Andre Ghantous, left, tries to keep the puck away from Alabama-Huntsville’s Daneel Lategan during their WCHA game on Friday night at the Berry Events Center in Marquette. (Journal photo by Trinity Carey)

Northern Michigan University’s Grant Loven awaits a faceoff during the Wildcats’ game against Alabama-Huntsville played at the Berry Events Center in Marquette on Friday, Nov. 1, 2019. (Journal photo by Trinity Carey)

Hawthorne glove-side. However, NMU hung on the rest of the period and clinched the win with an empty-netter from Beaulieu in the final minute.

The ending may have been great, but the game didn’t start off well for the Wildcats as just a few seconds into the first period, Huntsville was on the scoreboard. A turnover in the neutral zone lead to a scoring rush and Chargers center Josh Latta sent a cross-ice pass over to Jack Jeffers who fired it past Hawthorne’s glove.

NMU tried to use that early goal as a motivating factor as it started to put some pressure on Sinclair. With 16:52 left, Ghantous had a good look on net, but his shot was sent wide. Luke Voltin then had a chance on a rebound, but he was a second late getting to the puck. The Wildcats had another opportunity one minute later as Craighead fed Nardi in front of Sinclair, but he couldn’t get it past the netminder.

The ‘Cats did cash in on its next good scoring chance, though. With the puck behind the Chargers net, Nardi sent a pass up to Rylan Yaremko, who shot the puck at Sinclair. The junior made the original save, but Yaremko tapped the rebound past him and the game was tied 1-1.

Huntsville answered back quickly though. Just 28 seconds later, Connor Wood beat Hawthorne to the far post to put the Chargers back up 2-1. The period stayed fairly quiet from that point on as neither team received any decent scoring chances.

“You can get a little complacent with a little success and that was kind of Grant’s message all week,” Beaulieu said. “So I think we just kind of came out a little sleepy in the first and they’re a hard-working team. They’re D1 hockey. Everybody’s going to be good.

“So I think we just got caught off guard a little bit, but we weathered the storm, came back and that’s what I love about our team. We’ve got great resiliency and we just came back and didn’t get down and just got right back at it.”

The teams tangle again at 6 p.m. today in the Berry Events Center.