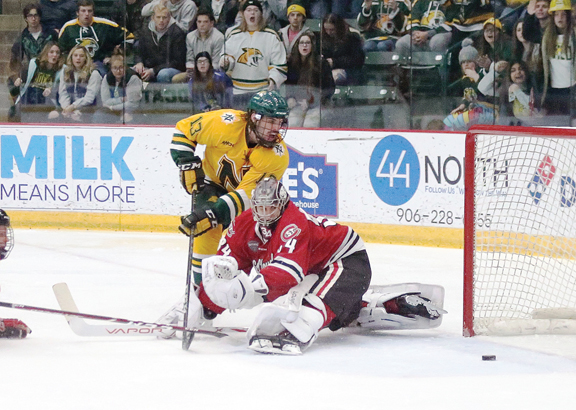 MARQUETTE — It’s been said before, but if there’s one word to describe the Northern Michigan University hockey team this year, it’s resilient.

After rallying for three goals in the third period to force a tie with St. Cloud State on Friday, the No. 16-ranked Wildcats did it again Saturday, and this time without a five-minute 5-on-3 power play to help them out.

However, after tying the game 4-4 and sending it into overtime, NMU gave up the game-winner as Huskies defenseman Nick Perbix took advantage of a tired Wildcats defense and snapped a shot past goalie John Hawthorne, helping the Huskies escape with a 5-4 victory.

When asked to sum up the game, Northern head coach Grant Potulny said it came down to defense and the Wildcats were just not good enough in their own end of the rink.

“I’m sure they’re tired of me telling them the same things after every night, too, and I’m tired of saying it,” he said. “The teams that can score sometimes … get away with maybe not playing as well as you should to win.

“We’ve shown we can score. You score seven goals on a weekend and you don’t win a game. But you have to be able to defend, too, and right now, we’re not defending.”

Down 4-1 to start the third, things looked bleak for the Wildcats as they struggled to generate offense. However, NMU gradually chipped away at its deficit and got back into the game.

After St. Cloud goalie David Hrenak robbed Wildcats forward Darien Craighead on the doorstep with a sprawling glove save earlier in the period, Craighead’s teammate Luke Voltin made Hrenak look foolish. The senior surged into the slot, grabbed a loose puck, deked around Hrenak and tucked it into an empty net to get Northern within two of the Huskies at the 9:33 mark.

A minute later, NMU winger Griffin Loughran showed his patience as he waited and waited in the slot for an opening and beat Hrenak blocker-side for his ninth goal.

Now trailing by just one, the Wildcats really started attacking the net. After getting St. Cloud’s Easton Brodzinski to commit a penalty, NMU made the Huskies pay at the 11:22 mark as Ty Readman got a pass by the near post and wristed it over Hrenak’s glove to tie the game 4-4. The Wildcats almost took the lead in the final minute of regulation, but Grant Loven’s shot rang off the far post to keep the game tied.

“But we played much better in the third. To be honest, I’m probably more pleased with how we played tonight than I was (Friday) night, even though we tied (that) game.

“You kind of look at your team and your season and we probably won some games we maybe shouldn’t have along the stretch. Tonight, maybe we deserved better. It always evens itself out in the end. But the area of major concern for us is our ability to keep the puck out of our net. Now, it’s starting to cost us.”

While the third period went well for the Wildcats, the first was pretty much a disaster. Loughran was whistled for tripping just 1:11 into the game and although the Wildcats killed off the penalty, the Huskies scored eight seconds after it expired on a goal by Sam Hentges.

Just two minutes later, St. Cloud struck again, this time connecting on a power play. Shortly after Hank Sorensen was sent to the box, Huskies defenseman Spencer Meier beat Wildcats goalie Nolan Kent to the near post and St. Cloud led 2-0. Kent was then pulled and replaced by Hawthorne.

“All weekend, we played probably one good period,” Loughran said. “Maybe 10 minutes, so we’ve got to figure out a way how to play at our best for 60 minutes, because at the end, no matter what happens, it always comes to end up biting you in the butt. We’ve got to find a way to play a full 60.”

Northern’s only good scoring opportunity came just over 12 minutes in as defenseman Rylan Yaremko got the puck in the slot and patiently waited for his chance. However, his shot rang off the far post and out, keeping the Wildcats at zero.

Hawthorne did his best to hold off the Huskies offense, but he couldn’t for long as Brodzinski collected the puck on a rush and beat the freshman netminder glove-side to put the Huskies up 3-0 going into the second.

“That’s the difference when you play teams like this,” Potulny said. “They have players, like we do, that can score from 35 or 40 feet if you give them a look. I think we’ve maybe given some looks to other teams that maybe don’t have those kinds of players. It’s hard to learn your lesson when it doesn’t go in, and tonight it did.”

The second period started a little better for the Wildcats as they started to put some pressure on Hrenak. At the 5:54 mark, Northern cashed in. Loughran put a shot on net that Hrenak kicked right to Andre Ghantous, who then beat the netminder to the near post.

The rest of the period was dominated by the Huskies, though. St. Cloud killed off a penalty when it only allowed one good look, and with 10:30 left, Brodzinski got his second goal of the night. The winger got a pass from Jack Poehling and fired it past Hawthorne. A minute later, the Huskies almost scored again, but Micah Miller’s shot rang off the post.

With 7:10 remaining in the second, St. Cloud had a golden opportunity to take a four-goal advantage as Hawthorne was tangled up trying to gather the puck behind the NMU net. However, despite having a wide-open net to shoot at, the Huskies didn’t capitalize. The Wildcats had one more scoring opportunity before the end of the second, this time while shorthanded, but Mitch Slattery’s shot was sent wide by Hrenak.

With Craighead, Yaremko and Slattery just missing out on potentially giving the Wildcats the lead over the course of the game, it was clear that the bounces weren’t going to go Northern’s way.

The Wildcats host Alaska-Fairbanks this weekend with Friday’s game at 7 p.m. and Saturday’s at 6 p.m.