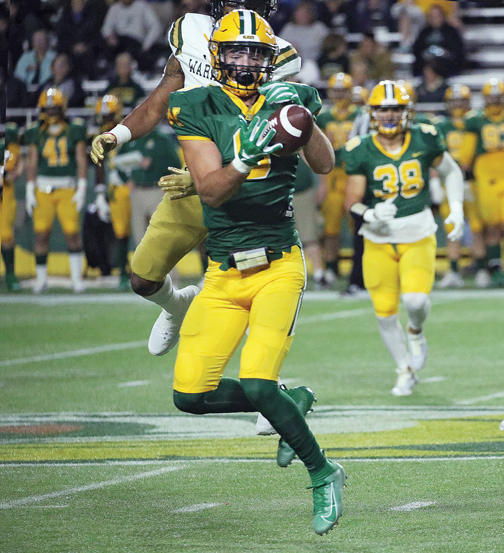 MARQUETTE — The last time the Northern Michigan University football team won a game this year was at home in its season opener.

The Cardinals (4-5, 2-4 GLIAC) flew out of the gate at 3-0, but have struggled since and are coming off a close defeat to Ashland.

Despite that, SVSU is still a force to be dealt with. Quarterback Ryan Conklin is third in the league in passing yards per game (191.8) and second in passing touchdowns (14), while two of his receivers, Casey Williams and Chad Gailliard, are statistically among the best in the conference.

Running back Nate McCrary is second in the GLIAC in yards per game (90.4), so there’s another weapon for the Wildcats’ defense to deal with.

“They’re good,” NMU head coach Kyle Nystrom said Tuesday. “(First-year head coach) Ryan (Brady) inherited a pretty good roster. I think Conklin’s the best throwing quarterback in the league. I thought he was last year. He just doesn’t get the recognition because he’s not a dual-threat guy (who) runs around like other quarterbacks do.

“But if you want to … watch a guy technique-wise sit there and throw the ball, he’s got a whoop on him. He can get that ball away quick and where he wants it to.

“It’ll be a big challenge. I told the team last night that there’s no better way to take care of your seniors and it’s been hard for our seniors. It’s been difficult for them.

“They’ve persevered and gone through some tough times and stayed in the saddle for us. They don’t spill their guts. Our kids, our players, they stay in the saddle and they strive to get better and persevere.

“We’re pretty stubborn about not bowing out. We stay at (the) task at hand pretty well. The best way to take care on senior day is to fight and get a ‘W.’ That’s what we work on.”

If there’s a Cardinals’ weakness for NMU to exploit, it’s their passing defense, which is eighth in the GLIAC in yards per game allowed (226). The problem is the Wildcats have struggled offensively the past two weeks, so they’ll have to improve greatly if they want to light up the SVSU secondary.

Those problems were definitely on display last weekend as Northern only threw for 71 passing yards and only scored 10 points, all in the first half against a winless Northwood squad. Nystrom liked how his defense played against the Timberwolves, but the offense is a different story.

“Simply put in that game, we played some good defense,” he said. “There were some performances that we needed to be better at.

“But I can’t hold them to 10 points or less in today’s college football. The defense is playing pretty good, but we can’t get points on offense. We’ll make the personnel changes and see if we can do some things. The offensive line, they played OK. They weren’t great but they weren’t as bad as I actually thought we were getting beat on things.

“But we didn’t. We played OK. We gave up a little weight inside when we got bullrushed. We got off tilt a little bit with one of the guards. Our big skill players on offense have got to grow up and get better there. We need some help through recruiting….

“You need those fullbacks and tight ends. They’ve got to dominate some blocks…. You’ve got to win to get the gaps created for the tailbacks. I didn’t think we played as well as we needed to at the tight end and fullback spot, so we’ve got to come around there.

“Our quarterback spot, we’re not playing good, so we’ll use Keshawn (Howard) and try to generate some life.

“Our tailbacks, our three freshman tailbacks, they played pretty good. Would I like them to do some things different? Yeah, they’re not really good on the draw or the pass…. They’re generating enough to give us a chance….

“You’ve got to be better to score points. That’s college football. Unless you adjust so dominating as a football team, I don’t know how you can hold somebody to less than 21 points nowadays. Any way you slice and dice it, we just can’t hold anybody to 10 or less right now.”