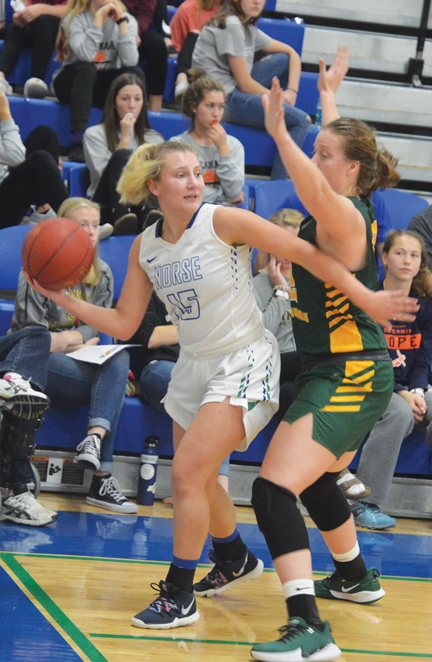 “Ultimately what you got to do is get the ball into the basket, and we really struggled with that part.” — Troy Mattson, NMU women’s basketball head coach, on the Wildcats’ 45-32 loss at Minnesota-Duluth last Friday

MARQUETTE — Visiting Minnesota this time of year can leave you with mixed feelings as you either love the beautiful scenery or you hate the cold weather.

Both Northern Michigan University basketball coaches had those varying emotions after returning home from their trips to the North Star state.

For women’s coach Troy Mattson, his squad was plagued with offensive woes as the Wildcats (1-3) got blown out at Minnesota State-Mankato 83-57 and then barely made it to 30 points in a 45-32 loss at Minnesota-Duluth.

The NMU women have a home weekend with Minnesota teams this weekend in the Berry Events Center against St. Cloud State at noon Saturday and Concordia-St. Paul at 2 p.m. Sunday.

“It was an offensive struggle all weekend for us,” Mattson said Tuesday about the trip to Minnesota. “We’re not going to even worry about Thursday (against Mankato) because that’s not the way we’re going to play. We got caught up in a game that we don’t want to play that way and that allowed us to play that way. And we learned a lot from it.

“The problem was we had this nightmare evening of putting the ball into the basket. It just didn’t go in. So we checked the film and watched it with our players (Monday) and going into the last couple of minutes of the game, we only had eight turnovers. So that means you’re getting shots. And all of our shots, the majority were around the basket.

“Then Jessica (Schultz) goes 1 for 14 and if she has an average night and makes six, we would’ve had a chance to win. We had it cut to seven (points with) about four or five minutes to go and we had a freshman break down on defense and it jumped right up again. The game was pretty much out of reach then, but we were competing.

“We were playing the style that we wanted to play and ultimately what you got to do is get the ball into the basket, and we really struggled with that part.

“We can’t have our most important player (Schultz) not play well. She’s got to play, at least, good. Injuries to Lexi (Smith) and Liz (Lutz) are pretty severe and those are people who get points for us. They’re just not capable right now playing at the level they need to play. It’s going to be a process of monitoring them throughout the whole season.

“But we had some good points. Erin (Honkala) had a great weekend I thought in both games. Amber (Huebner) played her tail off all weekend.

“I think it’s all going to fit. It’s just a matter of when and we needed this week break, not playing until Saturday, so we can get organized in the next few days to find out where we’re going to get baskets and how we’re going to stop people.”

Mattson said this weekend’s opposition is similar to what they’ve already saw in Minnesota.

“St. Cloud State is very similar to Mankato and Duluth,” he said. “They’re big, athletic and strong and mature. Then the same thing is going to happen when we play Concordia-St. Paul on Sunday.

“I play these teams for a reason, to toughen us up and find out where we’re at and what we need to work on. If we’re not playing somebody very good and we’re winning by 20 or 30 points, as a lot of teams in our conference do, you don’t learn much about your team.

“Both us and (Michigan) Tech went out to Minnesota and both took some lumps (last) weekend. Now we’ve got to go and figure how we want to play and we get to play at home here. We haven’t played at home yet, and hopefully, we can shoot the ball a little better and get some confidence in our offensive game. Defensively, we made great strides.”

NMU men round into form

NMU men’s head coach Matt Majkrzak, on the other hand, liked that his team is starting to figure things out even with a 1-1 weekend. Last Friday, the Wildcats (2-2) lost to Duluth 84-62 before bouncing back to defeat Southwest Minnesota State 72-63 on Saturday.

The Northern men are off until after Thanksgiving, when they travel to Alaska-Anchorage to play in the Seawolf Thanksgiving Classic, facing Alaska-Fairbanks next Friday and host UAA on Saturday, Nov. 30.

“I think we played three really good halves defensively and played one good half offensively,” he said about last weekend. “That’s kind of going to be the nature of our team as we continue to grow. We’re going to have more offensive performances and then the defensive end just needs to continue to grow and see how consistent we can be.

“I think we’re starting to really figure out what it’s going to take for this version of this team to be a good team. I don’t know if we can do it night in and night out yet, but I feel like our guys have a much better understanding of just what it takes in college.

“I think the first four games were great for us that way where we can really experience a lot of ups and downs, but maybe not have the record be as bad as it could’ve been.”