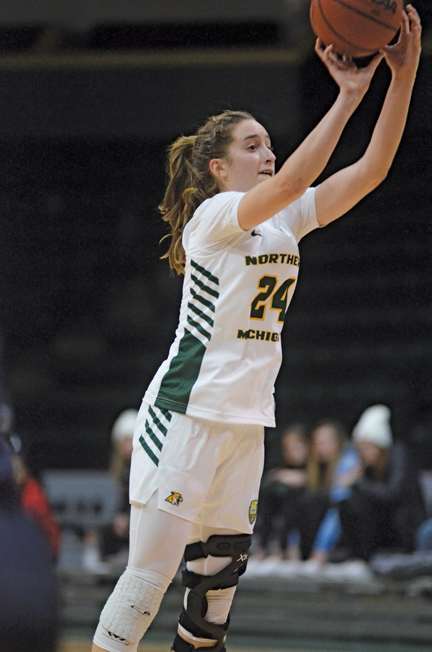 After a last-second 55-53 win over St. Cloud State on Saturday, the Wildcats defeated Concordia St. Paul 65-60 on Sunday at the Berry Events Center.

“We have to own our home court,” he said. “We talked about it (today) with our girls, you go about it by playing defense, rebounding the basketball and executing on the offensive end. For the most part, I thought we did that, other than taking that blow early on in the game from (Concordia).”

Mattson was referring to a 15-point first quarter deficit after the Wildcats fell into a 21-6 hole early and didn’t see the lead again until late in the third quarter.

Mattson credited the Golden Bears (2-3) for their hot start and limiting his team’s chances.

“Give Concordia great credit,” he said. “They came out and blistered us from the 3-point line and they have a center who can step out deep.

“They got us into a hole, but our girls didn’t back down. We kept fighting the whole night, we got ourselves back in the game at halftime, and we were only down five (at the half).

“I was really happy with that considering we were down a lot, and then we had some people who really stepped up and played well. Elena Alaix obviously had a huge night making shots for us, and also making plays on the offensive end.

“Erin Honkala is also playing really well for us. She battled all night long and had a couple of baskets for us late in the game on a couple of broken plays.”

Mattson added that he was pleased with his team’s defense, especially after committing 19 turnovers at the other end. CSP scored 23 points off of NMU turnovers.

“We just need to take care of the basketball a little bit better and get the ball to where we need to get it,” he said. “Our defense, believe it or not, even though (Concordia) was making 3s, is holding true to what we want them to do, and that’s not giving up layups and free throws and we did a pretty good job of that.

“We’re still trying to find ourselves. We have a lot of new people getting involved here, they have a lot to learn, and as long as we keep doing that, I think this could be a really good basketball team sometime in the middle of January, maybe going into February if we continue to improve.”

After spotting Concordia the big early lead, NMU cut its deficit to 38-33 at halftime. The Wildcats tied the game 42-42 with 5:26 left in the third on a jump shot from Jessica Schultz.

After pulling within a point in the third, Baleigh Delorit stole the ball from CSP’s Sidney Wentland, with Makaylee Kuhn making a layup set up by Alaix to give the Wildcats a 46-45 lead with 3:40 remaining, NMU’s first lead since the game’s opening minute.

Northern led 53-48 after three, with the closest the Golden Bears getting was a one-point deficit in the final period.

With NMU up 63-60, Concordia’s Danielle Schaub missed a game-tying triple with three seconds remaining. Wentland immediately committed a last-gasp foul, but Lexi Smith thwarted the strategy by making a pair of free throws.

Honkala finished with 13 points, shooting 6 of 9 from the field. Kuhn added 12 points and Schultz 11.