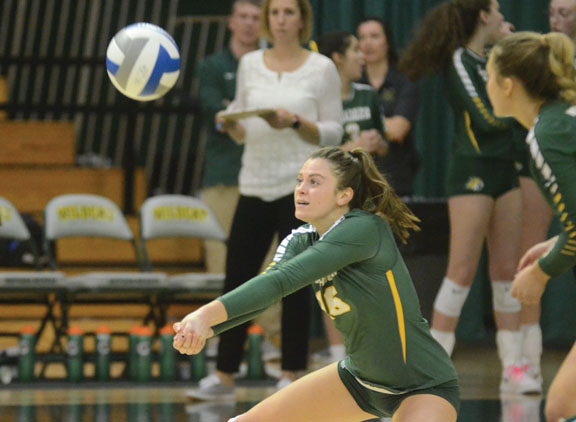 A day earlier, however, NMU insured its participation in the GLIAC Tournament with a three-set sweep of Northwood. 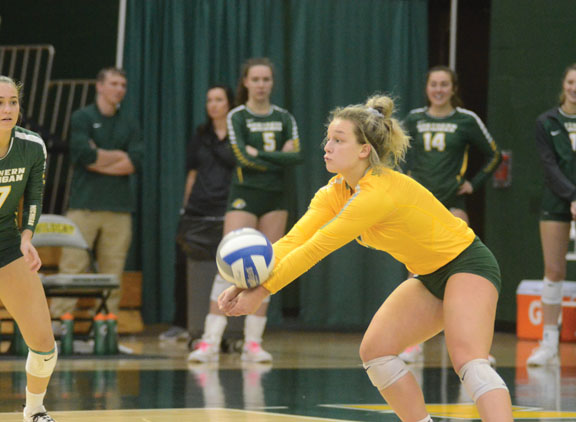 Northern Michigan University’s Alli Yacko bumps the ball in a match against Ferris State at the Vandament Arena on Saturday. (Journal photo by Amy Grigas)

The Wildcats’ 25-17, 25-22, 25-19 victory Friday night opened a three-game lead over Northwood with NMU holding the tiebreaker, insuring a spot in the eight-team tournament.

Northern Michigan University’s Alli Yacko bumps the ball in a match against Ferris State at the Vandament Arena on Saturday. (Journal photo by Amy Grigas)

Kuehn. The second set was much the same, NMU turning an 8-8 tie into a 15-9 advantage, though the Timberwolves retied it 21-21 before freshman Abigail Durecki got the set winner.

Kuehn and Durecki each had four blocks.

The first set was tight as the teams were tied 13-13 before Ferris reeled off three straight points. Northern pulled within one of the Bulldogs at 21-20 thanks to two kills from Stark.

In the second, the Bulldogs were in control for the most part before the Wildcats cut their deficit to 22-19. However, Ferris wouldn’t be denied.

Needing to win the third to stay alive, the Wildcats accomplished that task. NMU took a quick 8-2 lead and after the Bulldogs pulled within four at 12-8, the Wildcats rattled off four points in a row on kills from Lizzy Stark, Van Remortel and Durecki, along with an ace from Yacko.

Later, kills from Durecki and Wickstrom put Northern up 20-13. The Wildcats then closed out the set on a Wickstrom kill and Ferris error.

The Wildcats did their best to push the match to a fifth set as a kill from Durecki got them within three of the Bulldogs at 19-16. Later in the set, kills from Van Remortel and Stark kept NMU alive before Ferris finished it off.

Stark led NMU with 18 kills, while Durecki had 15 and Kuehn 12. Van Remortel had 46 assists and Durecki two aces. Defensively, the Wildcats were led by Yacko’s 15 digs, while Van Remortel had 14 and Madeline Crowley chipped in with 12.