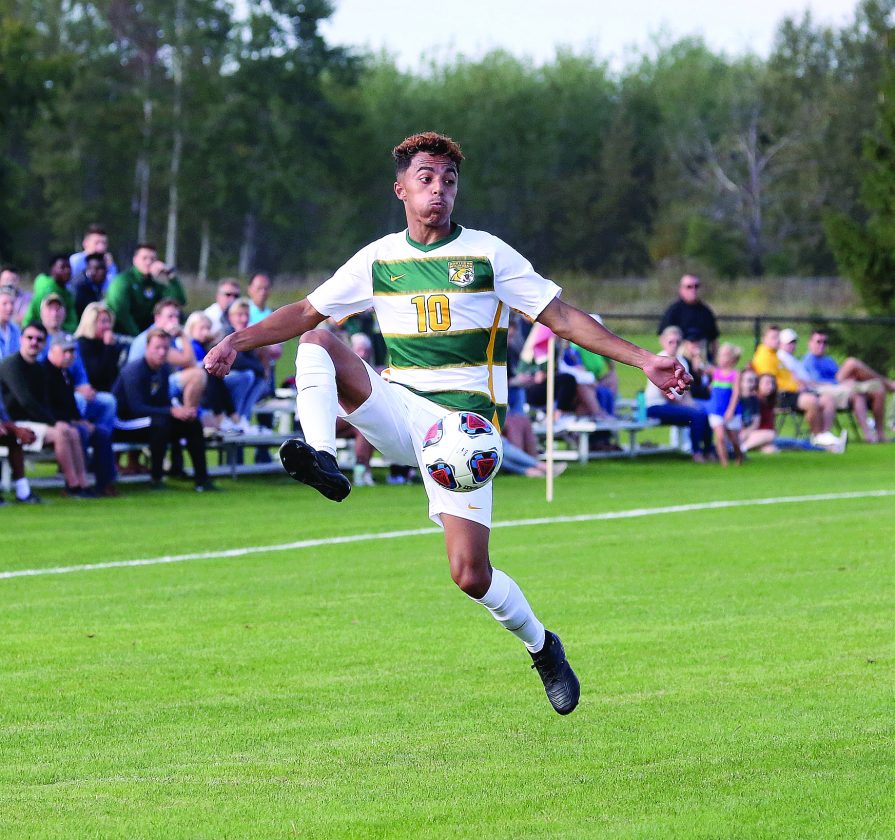 Northern Michigan University's Callum Olpin jumps to control the ball as he gets a pass from a teammate in the first half of a GLIAC men's soccer game played against Purdue Northwest at the NMU Soccer Field on Friday, Sept. 20, 2019. (Photo courtesy Daryl T. Jarvinen)

MARQUETTE — The Northern Michigan University men’s soccer team has a tall task on the road if the Wildcats want to come home for the GLIAC Tournament.

Already assured of a berth in the postseason for more than a week, NMU has an outside shot to move up to the fourth seed in the league and earn a home game in the tourney’s opening quarterfinal round. It would mark Northern’s first home playoff game in the program’s four-year history.

The now-fifth-place Wildcats need everything to fall into place, starting with their own win in Kenosha, Wisconsin, at league-leading Wisconsin-Parkside on Thursday afternoon. The Rangers are 10-5-2 overall and 9-2-2 in the GLIAC, one point ahead of Davenport and two ahead of Saginaw Valley State. League wins count three points and ties one point.

NMU is three points behind fourth-place Northwood, so the Wildcats also need Northwood to lose its Thursday game against SVSU to pull into a tie with the Timberwolves. The third tiebreaker, wins against the league leader, would fall in NMU’s favor if SVSU wins the league title as the Wildcats beat the Cardinals and Northwood would have lost to them twice.

SVSU will only win the league if both Parkside and Davenport falter, so NMU also needs Davenport to lose or tie in its final game against sixth-place Ashland on Thursday.

The Wildcats were left in this precarious position after splitting a pair of home games last weekend, losing to Davenport 2-1 and beating Ashland 2-0.

Senior Luca Lippert scored the lone NMU goal vs. Davenport, tying the game 1-1 at the time before the Panthers netted the game winner about 90 seconds later in the 78th minute. Teammate Patrick Restum made 10 saves in goal.

Then vs. Ashland, Lippert broke the scoreless tie in the 69th minute following a free kick by fellow senior Lewis Murray that was fed to Lippert by juniors Keegan Goetz and Arni Eiriksson. About 18 minutes later in the 87th minute, freshman Ryan Palmbaum hit a centering pass to Goetz, who knocked it in from the box for an insurance goal. Restum had to make just one save for the shutout as NMU held a huge 23-5 advantage in overall shots.

Restum is third in the GLIAC with 57 saves.

Updates throughout the season can be found on Twitter at https://twitter.com/NMU_Wildcats. Video will be available online at https://team1sports.com/Parkside/ and live statistics at http://nmuwildcats.com/sports/msoc/2019-20/boxscores/20191107_ez4p.xml.