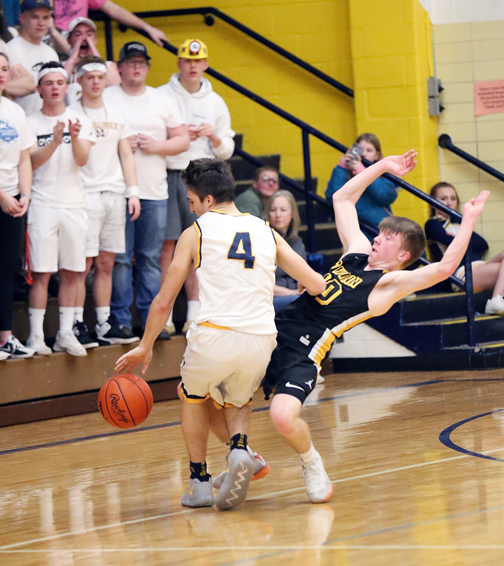 Gwinn boys basketball team struggled with last season, it was injuries that exposed a lack of depth.

Some players battled injuries throughout the season and others couldn’t play until late in the season because of them.

Still, the Modeltowners fought through the pain and closed out their season with a little momentum before falling to Negaunee in the MHSAA Division 3 district championship game.

When he looks back at it, Gwinn head coach Jim Finkbeiner said that he focuses on how his team ended the year and what they did in the tournament.

“The takeaway from last season is how we finished,” he said. “We always talk about how you want to have a good start to your season, but it’s also about, if you look at the whole season, did you make progress throughout that season?

“Taking away how we finished last season, we were pretty competitive, especially down the stretch playing the schedule we played. We played Iron Mountain, Escanaba, some bigger teams like that. Even Negaunee, we lost by two at Negaunee. Iron Mountain, we gave them a game for three quarters. Escanaba, three quarters. So that was one of the biggest things for us was that we did finish pretty well against some good teams.

The Modeltowners will look a little different as its two key players from last year, Tucker Taylor and Austin Forbes, have graduated. However, there will still be some familiar faces as Caleb Anderson and Nick Lightford are back, along with James Harnick, Mastin Love, David DuVall and Reid Hill.

Anderson had an Achilles injury and Lightford a thumb injury that kept them out for the majority of the year, but they’ll bring experience to the table, as well as the other four who saw a lot of minutes last season as sophomores.

“I think (the) best thing (is) our athleticism,” Finkbeiner said. “We’re more athletic than we’ve ever been since I’ve been here. From top to bottom. Guys can get up and down the floor and we’re stronger.

“Most of these guys played football, so I think (that) helps because the weight room and that type of stuff that we’re trying to incorporate in basketball, but they’re already doing it in football.

“So we should be very athletic and this is probably the first year that I’ll actually have guys that are going to be competing for starting spots. The last couple of years, I’ve had five or six guys that could really play and a couple other guys that you’re hoping can come along and get you some time. You’re counting on those five guys to give you as much as they can.

“This year (we have) those four sophomores that were up last year, the two seniors coming back and I have three guys coming from the JV team that played a lot last year. The JV team was 10-10. That’s .500, but they were extremely competitive in every single game. They never got blown out of a game last year. They definitely made some progress and those guys will definitely play.

“I look at our athleticism in the fact that practices are going to be a lot more competitive for your spot and your playing time and that’s a good thing for us.

Finkbeiner said he’s feeling good heading into the season and likes the fact that it’s kind of a new feeling on the court.

“This is kind of a new beginning,” he said. “Without Tucker and Austin, who we counted on to be our main players, main scorers or main leaders, there’s new guys. There’s new opportunities for these guys to step into roles that they haven’t stepped into before. Being that team leader on the floor, off the floor.

“Who is going to step up and score some points in this game, or that game? Who is going to rebound? There’s a lot of what-ifs, but the group of kids that I have are dedicated. They’ve played together for a long time.

“I’m excited for them and I think we’re going to be a lot more athletic than we’ve ever been from top to bottom.”