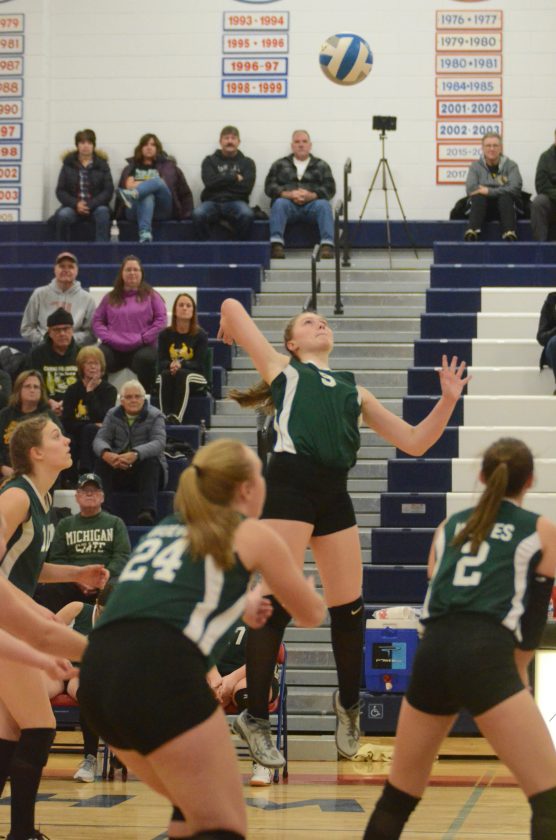 ISHPEMING — It was quite the season for that little school in Rock.

Not only did Mid Peninsula defeat three opponents for the first time in program history, but the Wolverines also claimed their first district volleyball title with a straight-set win over Rapid River.

The most impressive part of it all may be the fact that Mid Peninsula only had seven players on the roster this season, six of whom were on the court at all times.

All good things must come to an end, however, and during Tuesday night’s MHSAA Division 4 regional semifinal against Carney-Nadeau, the journey ended for the Wolverines.

They ran into an experienced Wolves team, who have four consecutive district titles and are seeking their second straight regional title after a run to the state semifinals last season. C-N topped Mid Peninsula in three sets on Tuesday night in the Region 25 bracket played at Westwood High School, 25-16, 25-22, 25-19.

Carney-Nadeau head coach Steve Kedsch credited the Wolverines on a great battle, with the match simply coming down to mistakes from the pressure of playing in the regional tournament. Kedsch also talked about his team being mentally prepared after a five-set win over Stephenson in the district championship match last week.

“It was a good victory and Mid Pen is a very good team,” he said. “I think they made a few more mistakes than they normally do, and being their first time here, maybe some jitters for them.

“With our big, emotional match up at Stephenson the other night, we weren’t probably as mentally sharp as I would’ve liked to be (tonight), but the kids still worked hard, did a good job and scored points they needed to score.”

The match was closer than the scoreboard indicated. Mid Peninsula would often pull within three points, but were unable to get a big enough rally to tie or take the lead.

“It seemed like we would pull away from them, and from playing them during the regular season, we knew that no lead is safe with them,” Kedsch said. “Those girls don’t quit over there and they just keep coming back.

“We were fortunate (tonight) that when they didn’t close the gap, we would actually make that little run back at them and pull ahead a little bit.”

Mid Peninsula head coach Emily Kayser held her head high, looking back on the positives while also taking in a lot of pride for the way her seven players performed.

“This is the furthest … Mid Pen has ever made it in the tournament,” she said. “I don’t want to sit here and dwell on the things we could have done. We have five seniors and they led the team all throughout the season. I couldn’t be more proud with how they played tonight and throughout the season.

“Unfortunately for every sports team, the journey does come to an end. Our journey just happened to end a little sooner than what we wanted. We have five seniors leaving and we’re going to have big shoes to fill up.

“The whole team in general, I’m super proud of them. They played their hearts out, gave it everything they had and we just came up on the short end (Tuesday).”

Eleven kills from Kennedy Englund powered the Wolverines offensively, while Camryn Croasdell added five and Karley Prater four. Daisy Englund finished the night with 18 assists, while five of seven players chipped in with an ace.

Carney-Nadeau raced to a 6-1 lead in the first set before Mid Pen pulled with three at 14-11, forcing the Wolves to call timeout. C-N notched the next two points out of a timeout and four of the next five, eventually going up 20-13. Mid Pen only managed three more points after that, and the set ended on a Wolverines’ service error.

Set 2 was the closest. After the Wolves jumped out to a 5-0 lead, Mid Pen tied it 5-5 on its own run, which included kills from Prater and Kennedy Englund.

The score was tied three more times before a four-point run put C-N up 14-10 that included two aces from Haley Ernest. Taylor Kedsch added a kill out of a Wolverines’ timeout to make it 15-10.

Once again, the Wolverines were unable to get a big enough rally to wrest away the lead, and the set ended on another service error.

Down 19-11 in Set 3, Mid Pen went on a four-point run to pull within four, also prompting Carney-Nadeau to call timeout. The Wolves received a block from Liana Blahnik out of the stoppage to put her team just five points away from the regional final.

The Wolverines got its deficit back to two points on an ace from Daisy Englund to make it 21-19, but the Wolves tallied the final four points as the set and match ended on an attack error.

Carney-Nadeau was paced by 21 kills from Kedsch, while Sandra Boulton finished with 10. Blahnik added six kills while Ernest had 38 assists and four aces. Boulton and Jules Thoune each had two aces.

Defensively, Boulton and Zoey Poupore each finished with 21 digs to lead the Wolves while Kedsch added 14 and Ernest 12.

In the other regional semifinal, Jeffers defeated Wakefield-Marenisco in four sets, setting up Thursday’s regional final between the Wolves and Jets. That match is slated for 7 p.m. back at Westwood High School, with the winner advancing to the state quarterfinals, currently scheduled for Sault Ste. Marie on Tuesday with opposition to be provided by Rudyard or Onaway.